"they moved my assigned seats"

Not Verified | JetBlue two weeks after I booked my tickets sent me an email that they moved my assigned seats as they claimed aircraft was changed. When I checked they took me out of my premium seats which I paid $147.00 and not only did not reimburse me but tried to charge me again when I tried to move my seats back. When I called the airline the JetBlue employee was not able to adjust the seats and had no idea what happened. I had to waste over 45 minutes on the phone after they called me back and still did not get the issue fully resolved. I booked 6 seats of which 2 were premium and they had no explanation as to why they moved all of our seats and why they moved everyone away from their travel companion.
10/10

"truly top-notch in all fields"

✅ Trip Verified | JetBlue is my go-to airline. I last flew in May 2021 in my favourite seat, 7F with the wing and engine view on an Airbus A320 and the experience was perfect as always. The cabin was the new refreshed one and it was kept in a very clean state with all equipment in working order and the seats are nice and comfortable. The adjustable headrest is also a plus in terms of comfort. I am quite tall at 5ft 10 and the legroom can't be beat, even with my backpack under the seat in front of me, I had room to stretch out and relax and my legs didn't hurt. Excellent cabin service as always with kind and courteous flight attendants and entertainment options as well and power outlets are avaliable to charge your devices. The complimentary Wi-Fi was fast and I experienced no dropouts for the entire duration of my flight from MIA to EWR. I am flying on JetBlue again this August and I recommend this airline to anyone looking for a affordable airline with more comforts than even the legacy airlines such as American Airlines. I would also like to commend customer service for their help because when I was booking my latest flight, I somehow got two tickets when I am a solo traveller and they took care of the issue and I got credited back any points used after the site experienced issues when this occured and even was able to score my favourite seat for both my return and destination trips after this issue was corrected. This airline is truly top-notch in all fields. 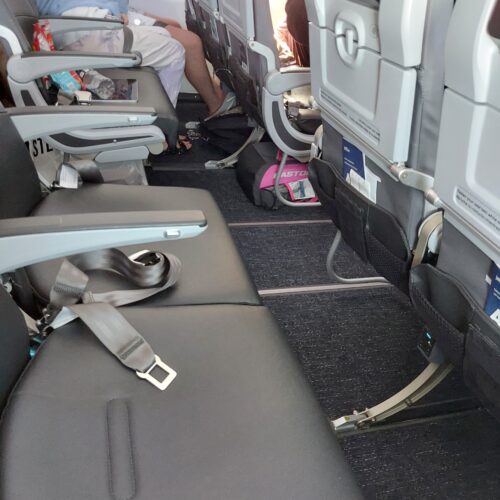 "plane and the seat was also filthy"

Not Verified | JFK to Boston last night. I was in seat 4A and paid extra for that seat. The seat in front of me did not go into the upright position and was declared broken by the flight attendants. My tray table was also broken and would not hold a drink. It was hanging from the back of 3A. The staff did not seem concerned that upon landing and takeoff, Seat 3A was in my lap and not appropriate. This does not even sound like acceptable safety standards, much less worth the price I paid for a ticket. The plane and the seat was also filthy and there was debris/food/grunge around the screen in front of me. The seat I was in was dirty with I arrived and basically I expect at least cleanliness from the plane during COVID. I wanted a refund in compensation for the less than acceptable trip. I received 25$ CREDIT. I would avoid this airline at all costs. You get what you pay for. Cheap flights. Unfortunately, they are the only choice sometimes. I have many more issues with Jet Blue and really hope that in their race to grab a portion of international travel, their standards are quite higher. The web sight and receipts have minimal information and I had to request it. I could not access my flight into if I was not on line, which is most of the time when I travel. Their app is AWEFUL. I could not get a hold of anyone to talk to. Used a chat session that was mostly script. I have flown small planes in 3rd world countries that have better standards that Jet Blu. The flight attendant was also surly and unresponsive to my concerns. They get a 2 only because it was the end of a 28hr day of travel and they got me where I wanted to be on time.
1/10

✅ Trip Verified | A very uncomfortable seat in what looks like a new plane. No reclining seats, uncomfortable cushion. Do not use this airline if seat comfort is important to you.
1/10

"my seats had been changed"

I booked my tickets and choose the same seats on 4 different types flights (21a) - when I got my tickets at the airport all my seats had been changed. I only like window seats because I love flying. No window seats were given to me either even though I had already selected them a month in advance. The customer service people at counter and gate were not helpful at all.
10/10

My seat 18D was very nice. It is my favorite seat because it is next to the wing and it has great view. Also not too far front in the back nor front. My seat legroom was very comfortable and resting, so good my carry on luggage could of fit in the seat in front of me without no problems.
2/10

"we were very disappointed"

We bought 2 Jetblue tickets from Seattle to New York. We did the online check-in 23h before the departure and our assigned places in the aircraft were 22E for my husband and 24B for me (BOTH in the middle). Even though we bought the tickets together and we were assigned 2 rows apart, we thought we could handle this situation at the airport, as we did before with other airlines. We arrived at the airport and went to the check-in counter to speak with someone. The lady there told us that there is nothing to do if we don't upgrade our seats for an 80$ fee as it looks like we bought the last two tickets and these were the last two places. When we arrived to the gate the gentleman there said "please come here if you don't have a seat assigned on your ticket in order to give you one". And that was the moment I realized we were fooled by this company. We went there and asked, how can we have bought the last 2 tickets in this aircraft and have the last two spots in the middle if there are people with no seat assigned? And he just told me “I said you can upgrade for 80$, if you don’t just have a nice trip, bye”. They were rude and impolite, they didn’t solve our problem and it was clear that they have a software that automatically assigns you and your partner far apart just to upgrade and pay more money. None of us was assigned at the window or the aisle because it’s harder to switch places in the aircraft with someone if you are assigned in the middle (if one of us would have had aisle or window seat would have been much easier). Overall, we were very disappointed and angry because they don’t have the desire to help you. (Even the tablets inside the aircraft have a swipe slot, to be able to pay if you want to use them.)
2/10

Most uncomfortable red-eye ever. Lots of legroom in the "Even More Space" section - at a price - but seats feel like hard plastic in an uncomfortable design covered with a thin bit of padding. On the first flight I thought maybe the seats and padding were just old and worn-out but the second return flight was even worse. I will be looking for alternatives to Jetblue when looking for nonstops and especially red-eyes: got virtually no sleep in terrible seats and could not find any position that was not uncomfortable. Nasty.