✅ Trip Verified | Emirates have joined the race to the bottom and started charging to book seats like other airlines? Fine, do this for extra legroom/bassinet seats and maybe the upper deck economy seats on your two-class A380s but not for every seat on the plane. I paid for a window seat on both legs (JNB-DXB-MAN) as I didn't want to run the risk of being placed in the middle of a 3 and luckily ended up with 3 seats to myself as on the first flight the passenger on the aisle upgraded to business class, and on the second they moved elsewhere. Overall still a great airline and economy class better than most (especially on the A380) but re-think the seat charging policy, which adds a significant cost to the ticket especially for an average family of 4.
4/10

"seats need to be redesigned"

✅ Verified Review | The seats need to be redesigned to create a feel of more room and comfort. Very cramped compared to A380 could take a look at some other airlines seating on similar planes. I know that airlines try to save money but they don't need to reduce passenger comfort in doing so.
6/10

✅ Verified Review | The seat was alright, however, it had a horribly dated IFE system and the seat just wasn't as comfortable as Emirates latest product. Food was alright, but isn't going to win many awards. Overall, the cabins on this Boeing 777-300ER aircraft are in bad need of upgrading, because their A380s are a lot better at the moment. My advice: avoid their 777s unless it is essential. Top marks for the content on their IFE and the charging ports, though. Their WiFi was slow, but was good enough to catch the Carabao cup draw!
3/10

❎ Unverified | Huge aircraft but disappointingly cramped conditions for long haul. My flight was cancelled moments before the gate was due to open. The flight was rescheduled for next day but crew claimed I was too ill to fly. I was offloaded despite my telling them I was not ill I just needed my medication. They then went through a show of calling a doctor in the US but by this time our bags had been taken off, so it had already been decided to offload us. The purser advised a doctor was waiting to see me and if he declared me fit to fly I could be on the next flight. All lies to get me off the plane, as there was no doctor and we were told to go home and see our own doctor and obtain a fit to fly letter. The airline then rebooked us onto a flight the next day but failed to tell us about it. So, four days after an attempt to fly with Emirates to Shanghai via Dubai, I am still in the UK with no ticket and no travel plans. Travel Emirates? Never again. There are much better airlines out there.
5/10

✅ Verified Review | Lucky to have an Extra Legroom seat which I paid for. 24A Window seat has no window but extra legroom. Bussed to remote stand to board aircraft from rear. Not a full flight so able to move about and have 2 seats. Food okay, nothing special and staff just doing what they had to. Very narrow seats, good inflight entertainment.
10/10

✅ Verified Review | I flew Colombo to Dubai and Emirates has my favorite economy class seats and is one of the few economy seats that are comfortable for me. When I look at buying economy tickets on my budget, I have to look at the seat size. It is worth it to me to get an economy seat with Emirates.
2/10

"configuration in 380 is the worst ever"

❎ Unverified | Very disappointed. Seats were packed in tightly, no legroom and the passenger in front reclined her seat throughout the journey making it extremely impossible for me to eat comfortably or sit in a comfortable position for an overnight flight from Dubai to Bangkok. I was looking forward to experiencing the A380. However, Emirates have configured the economy class seating to suit their profit rather than customer comfort. Of all of the airlines I have flown with, the economy configuration in the Emirates 380 is the worst ever.
6/10

"seats are quite uncomfortable"

✅ Verified Review | The seats are quite uncomfortable for people higher than 1,80 and in particular if in economy class, three people higher over 1,80 with normal shoulders are seated in the same row this can cause several problem to all three. The seat-back are too narrow in all the Boeing 777 categories and a flight of 4.5 hours can be acceptable but a flight with the same plane (Boeing 777-200 LR) a flight of 14/16 hours could be not comfortable for an higher person.
8/10

✅ Verified Review | The Boeing 777-300 ER seat was comfortable with sufficient recline, back support & lumbar support. Legroom was as expected & made matters worse due to the long travel time of 12.5 hours. The food tray table was a little too intruding & made matters worse but might vary as per an individual's build. The ICE in flight entertainment was top notch except for the sluggish touchscreen. There was 1 universal power supply outlet provided next to the TV screen. Overall a pleasant seating experience.
8/10

"Legroom is just about ok"

✅ Verified Review | Seats were chosen when I booked online 7 months prior. Requested Row 42J/K on the A380 and 46J/K on the Boeing 777. On the A380, Row 42 is the second row from the front on the lower deck, meaning there is no middle set of seats, just the forward stairs going to the upper deck (business and first class seats). Also, being forward of the wing and engines mean it's a quieter part of the cabin. The seat width is sufficient for the 7 hour journey between London and Dubai. Legroom is just about ok, but when the seat in front is reclined, you do have to make an adjustment if you are watching the tv screen. Screen is a good size, and the ICE entertainment system offers a vast selection of movies and box sets to keep you occupied. A good plus is that these films can be started immediately, so you can start your entertainment while the aircraft is still preparing for departure. However, we were surprised that the cabin crew come round to collect the headsets prior to landing. My advice is always travel with your own headsets (and adaptors). There are charging ports available so if you are using your own equipment, you won't run out of juice. Food and drink is complimentary (as is expected from an airline of this standard). However, the meal choice was the same as offered on the same route in 2013. Would have thought the menu could have been changed in three years. On the Boeing 777, Row 46 is five rows from the rear of the aircraft and as such, is the first Row where the layout reduces from 3-4-3 to 2-4-2. If you are travelling as a couple, the side seats on Rows 46 to 49 are the ones to aim for (Row 50 suffers from being too close to the galley and toilets). Seats are fine in width, but as they have three seats in front, you can angle your legs across to get more legroom. So a definite plus there. We had booked the same rows for our return flights. Would definitely recommend if you're travelling on these aircraft. 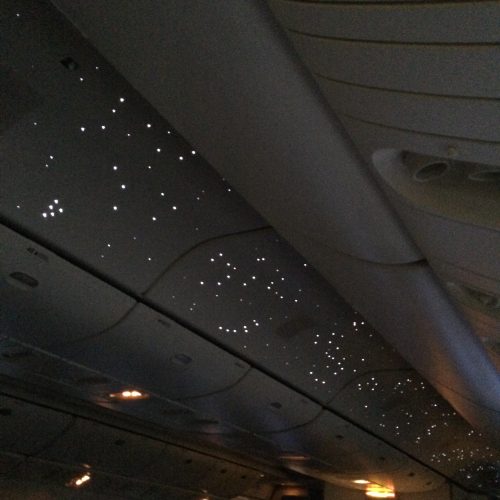 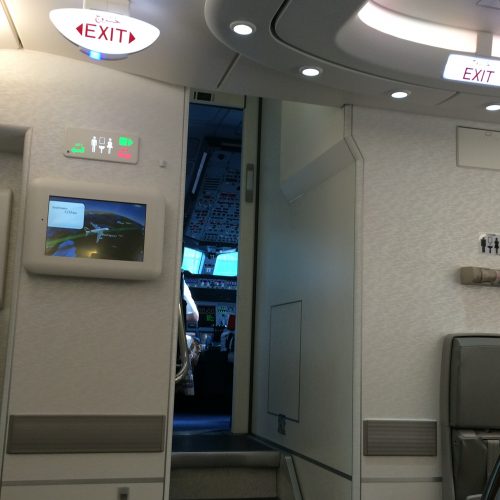 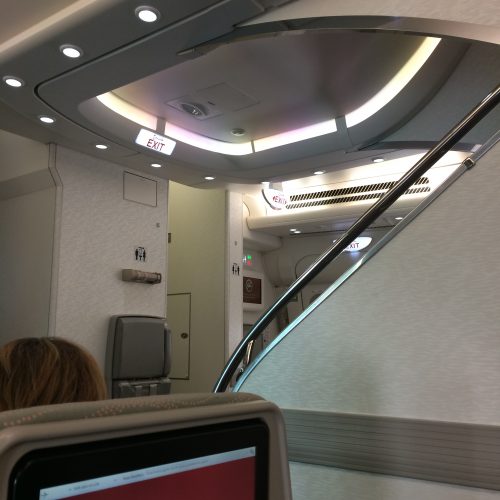