What has happened to Delta's seat pitch? The legroom is unbelievable, there is none! I measured the distance between the front of my seat and seat in front and width was the exact width of my IPad width! It looks like they've also put another row into 1st class on their 737's as well. They have now gone to the max limit of uncomfort now! After years of using Delta and being a Diamond status member, I'll have to call it quits with them. 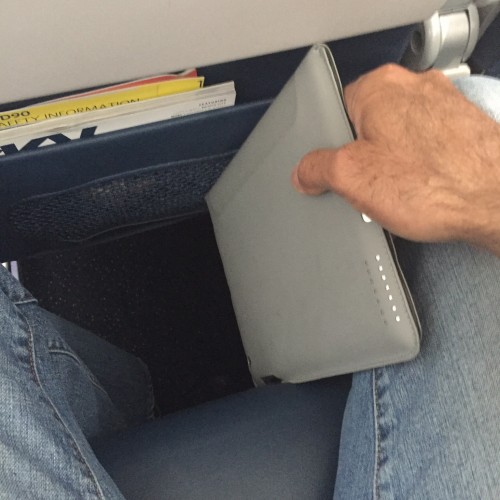 Not a fan of Delta Airlines. Over the years whenever I've flown with them, they've been consistent showing me why I should not fly with them from mud in a salad to the non-ergonomic too high seating on their larger planes that left my feet dangling and knees stressed resulting in cutting off blood circulation and swelling up my legs, ankles and feet. I took off my shoes to try and reach them to plant my feet on the floor. That still wasn't reachable. I couldn't stretch my legs with comfort and the recline button was stuck. The steward tagged my bag at the dock but didn't say anything and I found out later the tag meant to check it but I didn't because they didn't communicate that verbally with me. There was enough room in the overhead storage anyhow. Attendants constantly hit my shoulder when I had the aisle. Old planes with old technology. I am 5'4" and fit. I hope to never fly with Delta again. I hadn't in years but the past two trips I did.
2/10

"I was completely ripped off"

I am tall at 6'3", but my legs are not that long 32" inseam. I always pay extra for premium economy seats. On most airlines the extra premium is worth it. I usually have an extra 4 to 6 inches between my knees and the seat in front of me. However, the Delta Comfort seats are anything, but comfortable. My knees were jammed up against the seat in front of me, which was not fully reclined. The poor lady in front of me who also paid extra for a comfort seat couldn't fully recline her seat because my knees were jammed up against her seat. The premium for "comfort seating" on this trip was $386.00 round trip Pasco to Detroit. I think I was completely ripped off. It looks like maybe an inch more of leg room than regular seats. Looks like what they did was cram the economy seats even closer together and the few seats they didn't they call "comfort seating". I call it false advertising.
6/10

3+ hours of pure discomfort. Usually I try to upgrade to first class, however, it proved too cost prohibitive. Actually the price was way out of line for a plane that last saw the assemby line in the early 90s. Shoehorn comes to mind when describing my seating arrangement. I think the published 31-32 pitch and 17.2 seat width are a tortuous proposition. The only positive was that the flight from MSP to TPA was non-stop as was the return.
1/10

"most uncomfortable flight of my life"

I am sitting in an Aisle Exit Row of a Boeing 757-200 airplane, halfway thru a 3.5 hour flight, and am having the most uncomfortable flight of my life. I am 5'6 and medium build. The leg room in the exit row is good, but the shoulder/arm room (side to side) is terrible. On the aisle side, everyone who goes by, including flight attendants, hit my shoulder and arm. On the other side, a larger gentleman (not fat, just large build) is encroaching on my personal seat space. This situation is unacceptable.
1/10

The seats were roomy, with almost a full arm length before I could touch the seat back in front of me. The width was a bit better than average. The Bad : seats seem to be made of a molded, hard plastic, with a thin foam-filled cushion placed on top. Initially, when you sit in them, they feel ok, and supportive. However, when you're spending eight hours in one, the thin foam cushion quickly loses any cushioning ability. Additionally, the seat recline moves the actual seat as well as the seat back, which puts your back in an unnatural extension. This is ergonomically very unhealthy. Resulting backache for 3 days. I have friends who only fly Delta. They've invested in a $75 seat cushion to alleviate their in-flight back pain.
8/10

I found my MSP-NRT flight to be comfortable for economy. Seat was pretty wide and there was great legroom. Recline was okay too.
1/10

"the worst flight I've ever had"

LHR to LAX was the worst flight I've ever had in my life. Seats were rock hard and my backside was numb with pain for the entirety of the flight. The Media screen was tiny and was not working properly . The earphones they handed out are a disaster. The whole plane feels And looks dated.
1/10

Painful four hours from LAS to ATL today in seat 42C. Seat too narrow seatbelt a real struggle to buckle pitch so short that I have to turn my legs in order to fit into the space allocated. Seat back would not stay upright kept sliding back. FA's seemed aware as they didn't ask me to bring my seatback up for takeoff or landing. The seat cover was ripped dirty and had several miscellaneous stickers ground into it. On the positive side I was able to track the flight so I always knew how much longer I had to endure.
1/10

If you want a very hard seat fly Delta economy on certain 767-200 and MD90 aircraft. Delta must have gotten a good deal on these seats. I use to think the CRJ200 was bad but the seats of this 767-200 LAX- ATL 1155pm were dreadful. The seat cushion is extremely hard and on a 4 hour flight they become almost unbearable. Don't fail to miss this seat. Had the same experience on a Delta MD90. Delta need to fly these seats to the desert not the 767 just the seats.
41 to 50 of 86 Reviews