I flew on a ANA Boeing 787 flight from Seattle to Tokyo Narita with my wife and baby daughter. The flight was 10 hours long and we had the bassinet seat at the bulkhead in the rear cabin. I had previously been on the same aircraft type on ANA in the 2x4x2 economy arrangement which was really nice. This new arrangement (3x3x3) is poor. There was much less space and the bassinet / wall design was sculpted making it awkward with reduced space since the cot is mounted low. It has much less space in comparison to their 777 cabin design in a similar seat; or A330/A340 cabin design on another airline. I don't think this narrower width of seat is suitable for long haul travel. I strongly recommend avoiding this plane for those travelling with a baby. ANA flight attendants are wonderful but unfortunately it doesn't make up for poor cabin design sometimes.
9/10

"seat was nice and comfortable"

ANA All Nippon Airways premium economy class seat was nice and comfortable on this flight with their Boeing 777-300ER.
10/10

"better than I expected it to be"

ANA's 3x4x3 layout is better than I expected it to be. The seats are comfortable and leave plenty of room for larger westerners to stretch. The aisles are narrower, but no different than domestic airlines in the states. PTV had a great selection of movies and music; my only complaint would be the TV show programming. They feature a lot of popular drama shows from the USA, but no comedies.
6/10

"lack of space on the aircraft"

I was really looking forward to a nice flight with ANA on Economy from Tokyo HND to Vancouver YVR, but there is a lack of space on the aircraft, especially for a gruelling 8.5 hours. Seats were thin and as hard, legroom was tight but the worst part was that when you reclined, the seat base slid forward, causing less legroom. The plane was amazing, though, and it was quite an experience to try out the new Dreamliner. The windows dimmed by pressing a button, cabin pressure and humidity was higher and you could feel the difference after a long flight. Cabin crew service was great and the food was, as usual, really tasty and of high standard. I will fly ANA again. 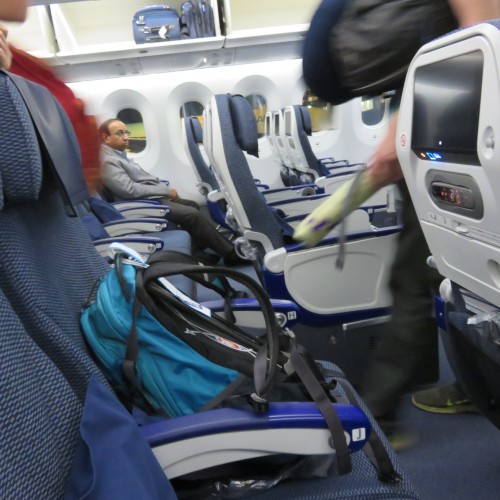 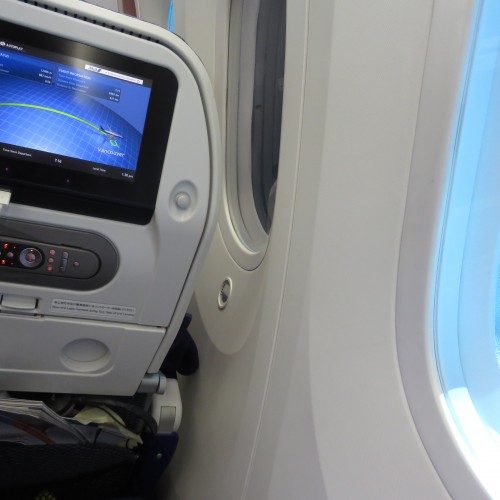 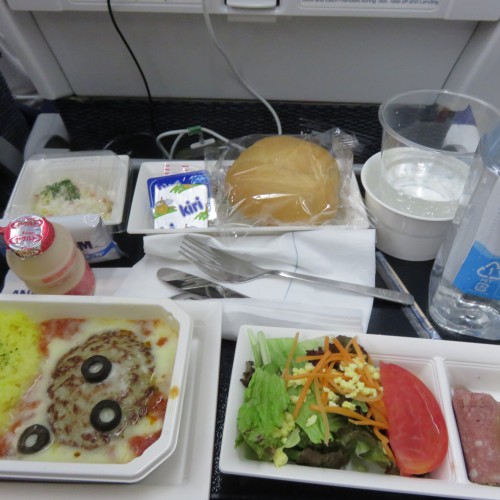 "seat width was a bit too tight"

I flew SEA-NRT via 787-8 and was a nice ride. I am Asian male but the seat width was a bit too tight. Seat pitch and recline was more than enough. PTV is very accurate and responsive with the USB and audio Jack. I would fly ANA again much better than United.
2/10

"planes were so hot and stuffy"

I flew ANA roundtrip Honolulu to Haneda Tokyo. The planes were so hot and stuffy that it was terribly uncomfortable. There were blankets on every seat but no one used them in the entire plane. I am not unusually tall. I am Asian but my knees could touch the seat in front of me as the rows were close together. The head rest with flaps did not go up or down to adjust to different heights of people. PTV screens were small. The cabin attendants were smiling and graciously took care of passengers efficiently and the meals were good.
1/10

MUC-HND on B787. The tightest seating configuration I have experienced on a long haul flight. 16.5 inch wide seat and 31' pitch - this has to be the worst. The in-seat screen from the seat in front of me was so close that it was hard to focus. ANA has gone from having one of the most comfortable economy classes to the very worst.
4/10

SFO to Narita 12 hrs had the exit row seat. Stunned to see how narrow the seat was. I am thin and could just barely fit into the seat. Space is eaten up by the front tray and the tv stowing into the arm rest. But the genius who configured these seats should have thought about the passenger comfort on a long flight. Sheer torture with good leg space.
8/10

Bulkhead seat provided lots of legroom to fully stretch out legs plus easy access to aisles even from middle seats. The entertainment system is a pull out style on bulkhead seats.
1/10

This is the smallest long-haul seat I've ever seen (and I fly a lot). It was 10 hours of discomfort (SEA to NRT) and I was in an aisle seat. The seat pitch is the same as or smaller than low-cost- carriers flying short-haul and the seat width is bad too. The plane was new the video selection was good and the flight attendant's were great but if the seat is tiny you will still be miserable. The plane was hot too which added to the discomfort.
11 to 20 of 25 Reviews