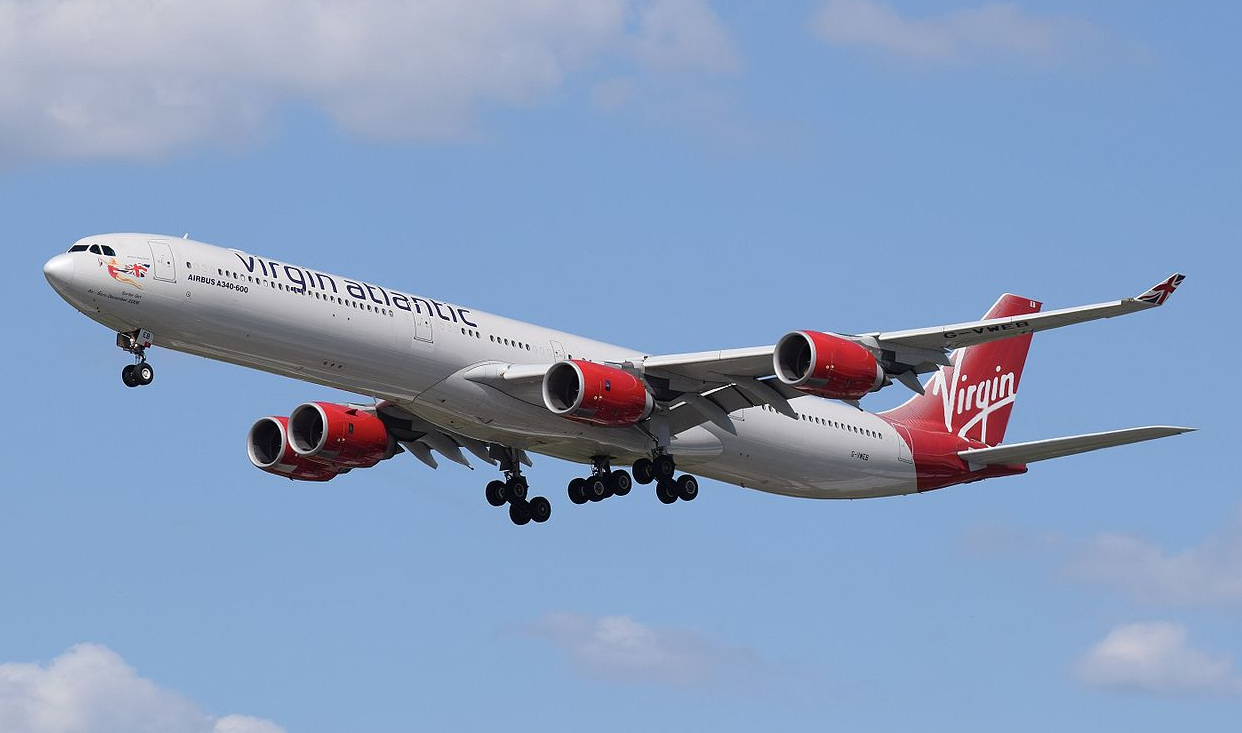 Terminal 3 is Virgin Atlantic’s home at London Heathrow and the terminal space is tastefully tailored to the airline and it’s brand. Large hanging mobiles and LED lit branding strike off the first tastes of the Virgin red. Check-in is via automated units. I am travelling light and already checked-in so it is merely a formality. Staff are visible, proactive and helpful with other customers. The security point is crowded at Terminal 3 this morning but still takes less than 15 minutes.

Virgin is assigned a fairly unglamorous corridor for boarding of most of its flights from Terminal 3 and facilities are limited around the gate area. Boarding begins on time, is organised and staff appear cheerful.

This morning’s flight is on the A340. Virgin Atlantic is gradually shedding their Boeing 747 and A340 in favour of the Boeing 787 and A330. Since it will be gone from the fleet within a year, it is nice to be flying with the A340 this morning. It is a 600 variant which visually means it is still the longest aircraft in the world.

Cabin flown is in Economy Class.

Virgin Atlantic offers a range of Economy fares which range from Light (no checked luggage) to Economy Classic which is one checked item at 23kg. As I booked the ticket through Delta I automatically receive the mid-option for checked luggage. Hand luggage is 10kg and again the airline offers dispensation for other small items.

The Virgin Atlantic seat in Economy is satisfactory though not overly spacious. The legroom space is further curtailed by some very chunky IFE boxes with sharp edges.

Despite this, the seat is comfortable, and headrest adjusts and is easy to achieve some rest in. The headrests have large, cushioned wings. Upholstery throughout aircraft is a mix or red and burgundy. Some seats lapse into a champagne colour and these indicate exit/ extra-legroom seats and a sly move into one of these would illicit an upgrade charge.

The tray table folds out as two sections and was sturdy when completing work on. Given how close the aircraft is to its retirement the seats are considered comfortable.

The cabin has an appealing palate throughout and is distinctively Virgin. There is no mood lighting on the A340 although crew are sensitive about raising lighting.Taking into consideration the impending retirement of this old aircraft, the cabin is in quite immaculate condition.

Washrooms begin pleasant but do not appear to get much attention from the crew throughout the flight. They do have a great neon blue lighting in them which makes it feel somewhat like a disco.

Boarding is completed on time. However, at the rear of the aircraft the cabin is buffeted by the wind giving the sensation of being at sea. There seems to be a bit of drama going on with the baggage handlers below; photos are being taken, colleagues are coming to observe with arms crossed and a lot of head scratching.

The Captain soon comes on to explain that one passenger missed the flight and that in the process of offloading their luggage, the luggage container had blown over in the strong wind. This adds around a 25-minute delay to departure during which time the crew pipe-in some 70s disco classics which has my seatmate happily shoogling around to the beat.

Ordinarily a menu would be given out but I overhear a crew member saying one of the allergens was incorrect so they have to explain the choice to all customers. Based on the return flight, the menu is appealing and quirky, taking on a convivial, informal tone. “How’s your day?” “Drinks? They are on the house!”

A drinks service is offered first, alongside a portion of pretzels. It is highly impressive to be given Fevertree mixers with all spirits. The quality is high for the drinks service. Other notable innovations are the availability of premium non-alcoholic spirit Seedlip. The crew also suggest that passengers may reuse their plastic cups if they so wish.

The first meal service commences around 90 minutes after departure, and despite a morning departure, lunch is offered (which is welcome). Both me and my seatmate allow the serving member to save her breath from repeating the meal options for the 37th time as we’ve overheard the row in front. “If only everyone was as easy as you two!” she exclaims.

Virgin Atlantic meal trays are quite standard. The portions are satisfactory for the length of flight. 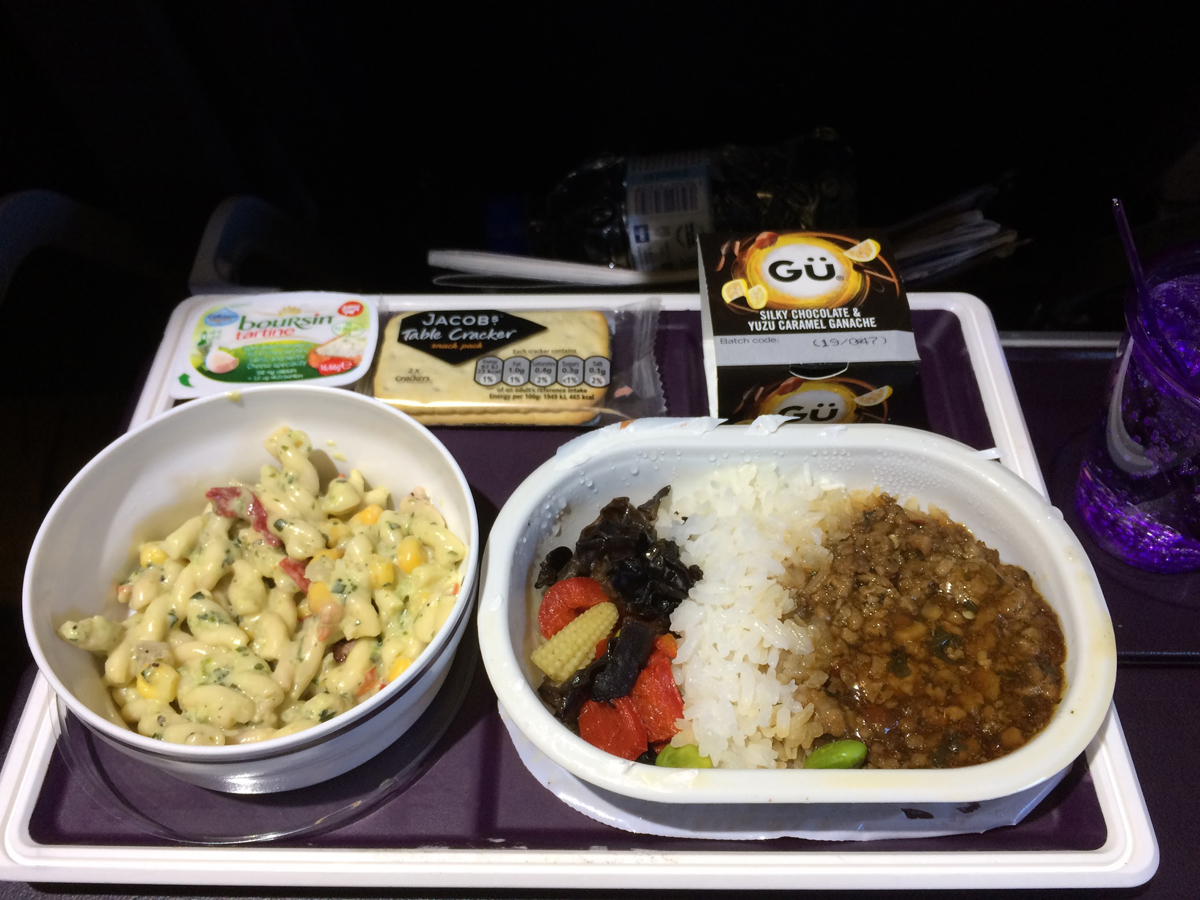 The starter is a simple pasta salad which was not very exciting and had a bland taste. There has been a run on the chicken and only the Thai Basil Pork is left. The highlight of the meal was a little pot of GU ganache which was rich and delicious.

A wander to the galley mid-flight reveals some glass jugs of orange and blackcurrant squash. The galley ‘snacks’ consist of a bowl of love-heart sweets. These are later given out at the end of the flight. The crew come around twice with the jugs of Robinson’s squash and these are refreshing on a flight, not to mention very British. 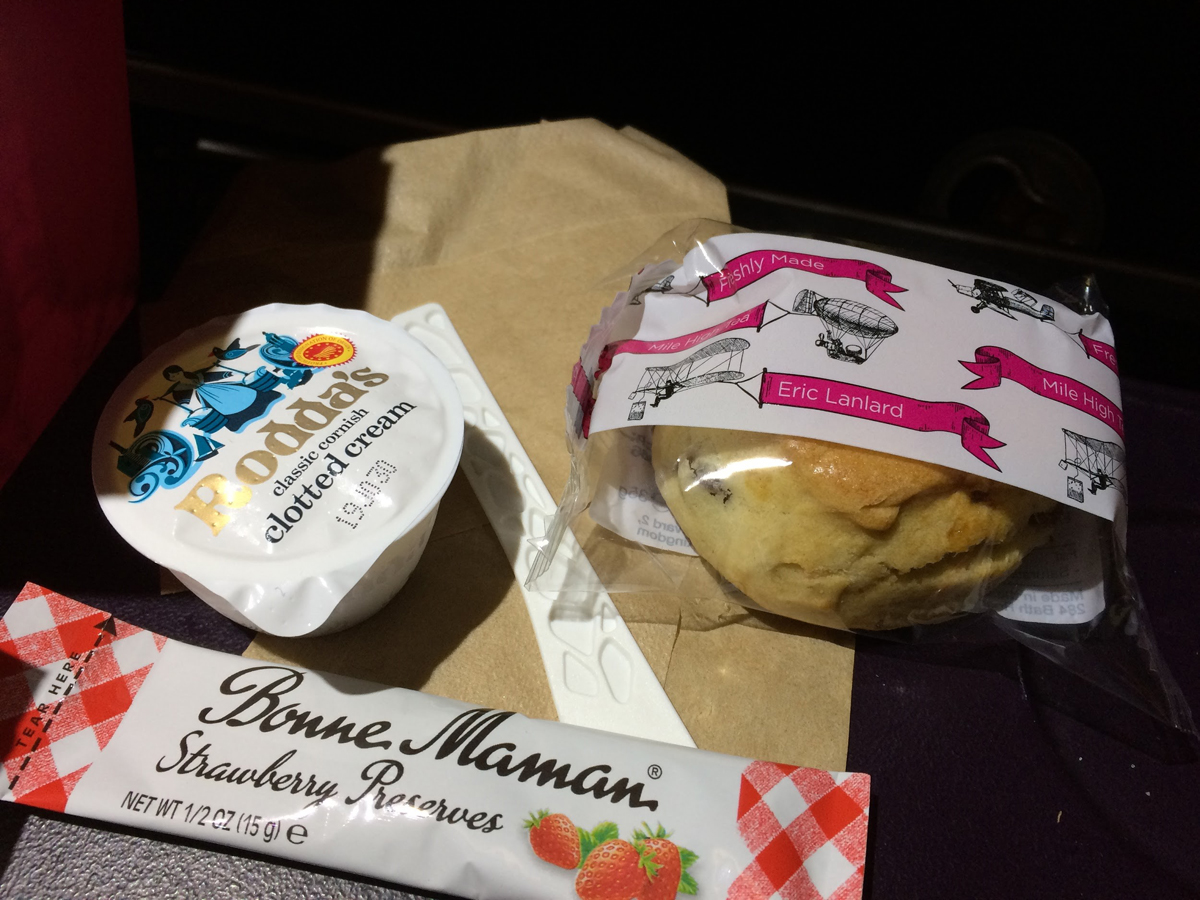 A cream tea pre-arrival box is offered 2 hours before landing, preceded by a hot towel. This an artistically printed box which symbolises much of the Britishness of ‘High Tea’. Tea, coffee and other drinks are offered in conjunction with this. The afternoon tea features a fairly bland cheese sandwich, a lovely scone, a sachet of jam and some Cornish clotted cream.

All seats have personal TVs, and Virgin Atlantic brand the entertainment as VERA. Whilst the content is not up there with Middle Eastern and US carriers, it is appropriate for the Virgin network and there are ample choices for a quick hop across the Atlantic.

The charm of the Vera system is that it features many British titles and features, including the best of the best of British drama and TV. The film selections are not all just Hollywood blockbusters but feature a broader range of more indie titles and documentaries. There are ample big-budget Hollywood and Oscar-nominated titles.

IFE standards on the A340 are quite weak, highly pixelated and navigation around the system is via a handset that looks like it’s been inspired by a PlayStation. Headsets are over ear, padded and comfortable. The sound quality is good for Economy Class. Personal headsets also plug in with ease. No WiFi is available on the old A340 but WiFi is available on the younger members of Virgin’s fleet.

No specific comforts and amenities are available on this flight. Technically it is also a day flight, so items such as toothbrush and eyeshades were not required. Washrooms feature pleasant, branded amenities even in Economy class.

Blanket product was quite ample although the pillow is the less-than-appealing microfibre style. The padded headrests mean than one can probably forego the pillow.

I was amazed at the quality of service from Virgin crew on both flights I took. The demographic of crew ranges widely and there are clearly some seasoned staff in the mix. They bring the purest form of service to the flight, showing care and attention to customer’s needs. The crew demonstrate that they enjoy their job, enjoy customer interaction and achieve cohesive teamwork.

The sense of crew going ‘above and beyond’ for customers is very defined during the flight. All are accommodating to customer needs. Patience is apportioned to various requests (e.g. changing seats, dietary requirements and a customer who keeps requesting ready salted kettle chips).

Crew maintain positivity during the flight, make great eye contact and a genuine personal contact with customers. Totally unprompted in Economy Class, a crew member explains fully the entertainment system to an elderly lady opposite me. The crew take no shortcuts in their approach to service and are intuitive and professional.

A mention too of the flight deck who provide a personal, informative and professional account during the entire flight. They are also at the door to wish farewell to customers.

Lights in the cabin are brought up 40 minutes prior to arrival. Customers are warned to make use of washroom facilities and seatbelt signs only go on 15 minutes prior to landing. Information regarding connections and baggage retrieval processes at Atlanta – the world’s busiest – are clear and connecting onto Delta services provided easy and painless.

Virgin Atlantic are a professional, polished and enjoyable airline to fly with. The brand embodies brand British strongly and have an extremely strong product. The investment in key areas such as catering, in-flight entertainment and crew training shines through during the journey.

The crew provide a model level of service, natural abilities and warmth towards customers. As Virgin modernises its fleet, customers comfort and standards should continue to improve.