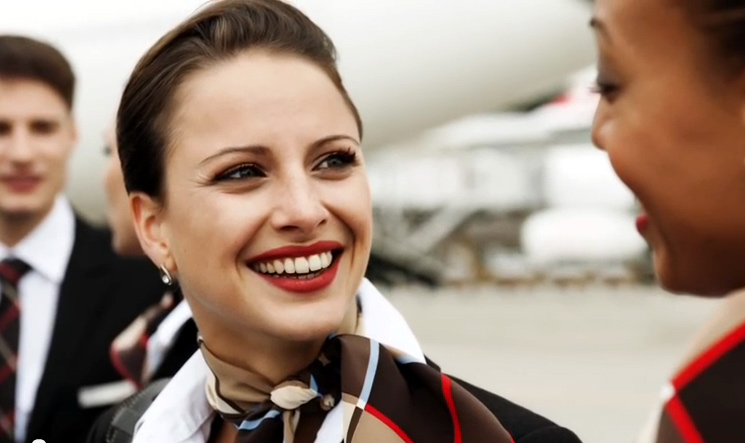 DEPARTURE AIRPORT
No need to check in at London Heathrow Terminal 2 having already printed boarding pass and travelling with hand luggage only. From drop off by the terminal entrance it is less than 2 minutes walk to FastTrack security, where processing was instant and no queues.

AIRLINE LOUNGE
SWISS business class customers may use the Lufthansa business class lounge at Heathrow, which still has a new feel. It is quite spacious and was clean at this very early morning period (05.00am). I used to the Senator lounge section which was quite empty and able to find seats easily. A great choice of breakfast foods is presented via a self serve buffet counter, both hot and cold, and to a very high standard. The lounge catering here is done by DO&CO, who are probably one of the best airline caterers worldwide.

BOARDING
Despite being one of the very first morning departures from Terminal 2, this flight departed from the satellite area of T2, requiring a fairly lengthy walk, and up and down escalators, and took about 8 minutes to reach the boarding gate. A separate boarding queue is provided for Business class customers, and reached there just in time to enjoy some element of priority boarding.


AIRPLANE & CABIN FLOWN
LX345 departing London Heathrow at 06.00am. Airbus A320 in Business class was about 90% full on this flight.

THE SEAT
SWISS business class uses standard Economy style seats, which are laid out 3×3 in the cabin, but the middle seat is kept empty in the business class section. Some aircraft have a middle seat table divider that drops down. The seat pitch was 33 to 34 inches on this aircraft. For the short duration of this flight to Zurich this was okay, but for a longer flight, it is hard to see where the premium value is delivered in onboard cabin comfort.

CABIN & TOILETS
The cabin was clean and well presented as the first flight of the day, the grey leather business class seat covers providing a smart appearance. A standard narrowbody type toilet is located at the front of the cabin, and this was clean when inspected once during this flight.

SCHEDULE
The flight pushed back on time, but just before take-off there was a medical emergency. Cabin staff reacted well to this, and we duly returned to the Terminal where the passenger was offloaded. The end result was a 1hr 30 mins delayed departure, and consequent delay into Zurich. With quite a number of passengers onboard connecting on from Zurich, the staff and Captain were efficient at trying to update on progress and advise on possible flight connection processes.

FOOD AND DRINK
A light breakfast was served after departure, and is quite sufficient for the flight duration and time of day. A cold plate is served, and warmed breads, croissants etc were offered twice by cabin staff, juices and other beverages. There were customers enjoying champagne at this time as well! The coffee service was delayed somewhat due malfunctioning galley equipment, but was of a good standard when it did arrive. 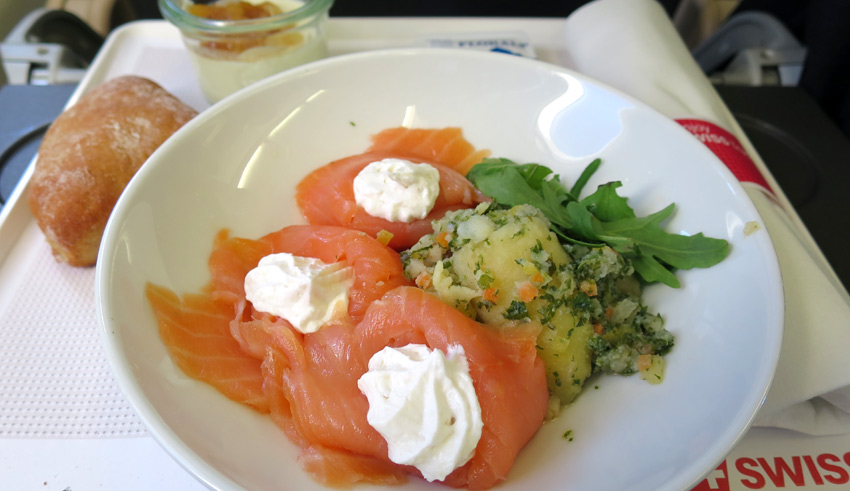 Snack served on Zurich to Paris SWISS flight later the same day (it was delicious!) 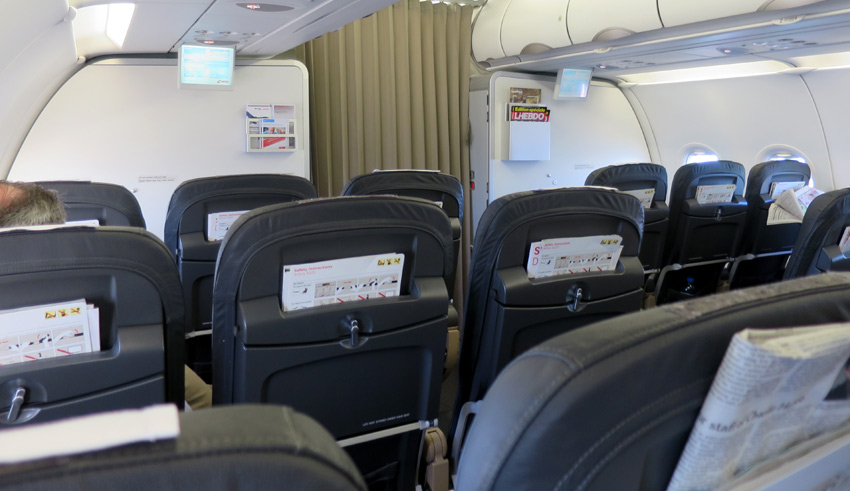 Business class cabin on SWISS A320

ENTERTAINMENT
These SWISS A320 aircraft do not have personal IFE. The small dropdown screens were used to show the Airshow map during the flight.

COMFORTS
There are no pillows or blankets provided. It appeared that there were a few small pillows available on request to the cabin staff. No hot towels are served, a packet towelette is provided at the seat on boarding, along with a small bottle of water for business class customers.

STAFF SERVICE
The staff offered a polite greeting to customers as they boarded this early morning flight. They reacted well to the medical emergency that occurred just before take off, and was a good demonstration of their skills. Inflight, the service was prompt and courteous, pretty much what one would expect on a short, early morning flight. Staff do not interact with customers in the way I’ve found on recent Lufthansa flights, and it is a rather sterile efficiency. Meal service was quite quick, although staff omitted to offer hot tea or coffee until much later in the flight. When questioned, they explained that the coffee maker was not working – but why didn’t they explain this to passengers when serving breakfast!

ARRIVAL SERVICE
Arrival into Zurich was late because of the delayed departure from Heathrow. There were ground staff visible by the airbridge exit to assist delayed passengers making connections. For me, it was a relatively quick exit from the terminal with hand luggage only, and took just 5 minutes.

VERDICT
Excluding the delay which was out of the control of anyone, this was an efficient and easy trip. It is only a short flight, and with the service enhancements on the ground (fast-track security, lounge access & priority boarding), it was quite good value. Business class offers that little bit extra by way of comfort and service on short haul flights in Europe, and if you can get a good price ticket, it’s well worth it. Later the same day I flew SWISS business class from Zurich to Paris, and the standards experienced on that flight were almost a mirror image of this sector.