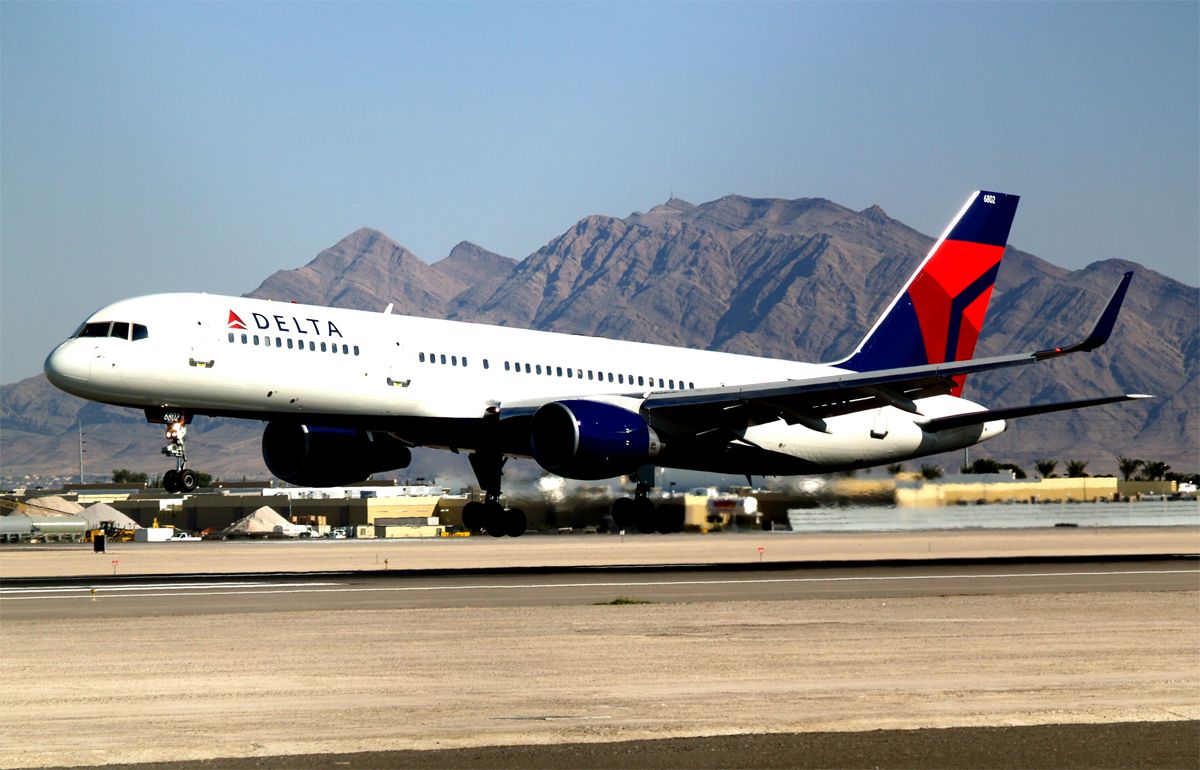 The check-in area for Delta is quiet when visited and self-check-in machines allow me to print out boarding passes all the way through to London Heathrow. A friendly screening officer asks me a series of inane questions regarding my baggage but seems more enthusiastic about finding out how I enjoyed Colombia. There is no queue for check-in and to my surprise, luggage can be checked all the way through to LHR requiring no recheck in the USA. A large purple tag on my bag makes this sufficiently clear. The check-in service is friendly enough. The queues for immigration are long and take around 40 minutes to pass through. Many of the officers drift off for the breakfast during this peak bank of departures which is frustrating.

Boarding commences well on time due to further checks completed in the jetbridge space by screeners. This means that the boarding process is quite slow.

This flight is on Delta’s 757-200 aircraft and boarding is through the second door which feels quite unusual on a narrowbody. Cabin flown is Economy. This aircraft is used largely for US domestic routes and daytime Latin America sectors so has no enhanced business class lie-flat seating. It has overnighted at Bogota.

Delta offers a myriad of different baggage allowance depending on the destination pairs and fare paid. For my Main Cabin economy flight I am entitled to 23kg checked luggage. For carry-on luggage, Delta is more focused on size rather than weight and as such no weight restrictions exist. The airline is also generous with duty free items bought in the airport.

The seat has an average degree of legroom but had a modern, leather look to it and is very comfortable given that the 757 is now quite an old aircraft. The cabins have been nicely retrofitted. Headrest adjustment is limited and the recline is very stiff and limited. However, for a close to 5-hour sector it is quite ample.

The floor is particularly dirty and as I kick about a floor panel, cashew nuts get dislodged. The cleaning on this aircraft was notably weak.

The cabin has an appealing environment and features a degree of mood lighting. In the USA customers may have their window shades lowered for take-off and landing, and many people on this early flight have taken advantage of this and the cabin remains darkened throughout the flight.

There are three washrooms at the rear of the plane but as I am wedged in a window seat I do not visit these.

Boarding is completed well on time and the crew distribute menus at this time. There are a lot of baggage handlers swarming around the cargo hold which may relate to a high volume of extra security checks performed on bags in BOG. Whether it has occurred in Bogota, Atlanta or London my bag arrives having been unlocked and opened. A clear shot into ATL means we arrived twenty minutes early only to be informed that Atlanta customs does not open until 1pm.

An appealing menu is given out upon boarding. However, this is really mutton dressed as lamb as despite the gourmand descriptions, the meal proves to be a carelessly made chicken and cheese sandwich. 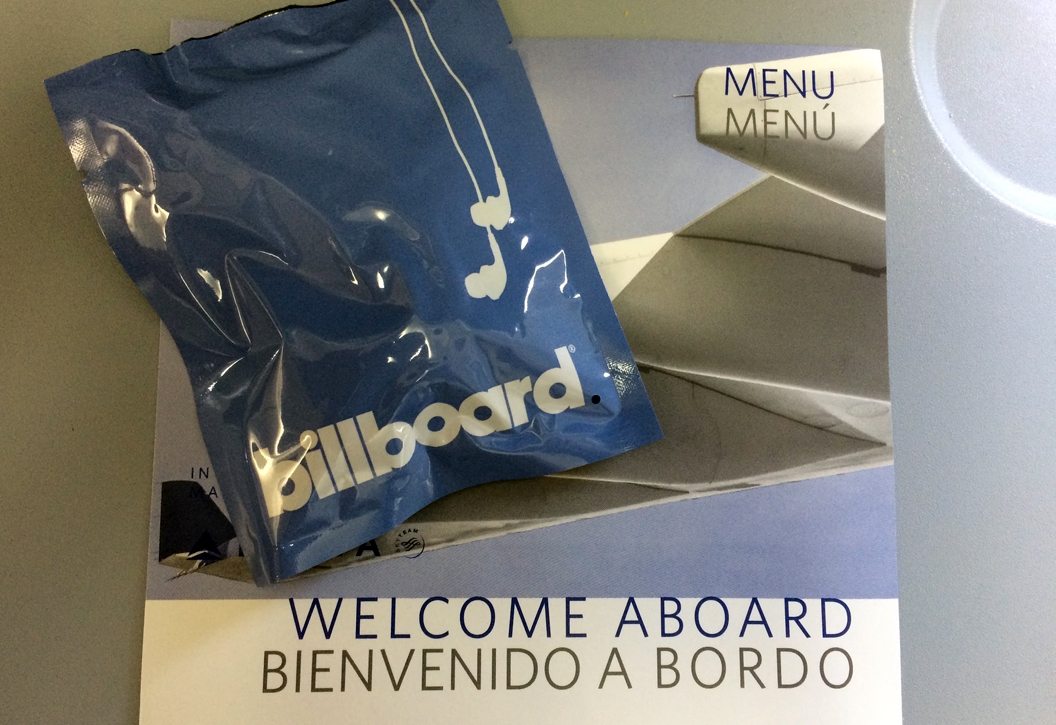 Delta cabin staff are slow to commence their service and it all feels very leisurely. A drinks service is offered initially and despite it being 8am, bottles of wine are sitting on the cart.

It comes as a surprise to find that all beverages are complimentary on this flight as it is across the threshold of Central America (whose flights must buy onboard). Not only is it the case that beverages are complimentary, but the selection is excellent. This includes smaller distillery rums, Club Colombiana beers and glass bottle miniatures. Staff go to town with the ice and give me the whole can. 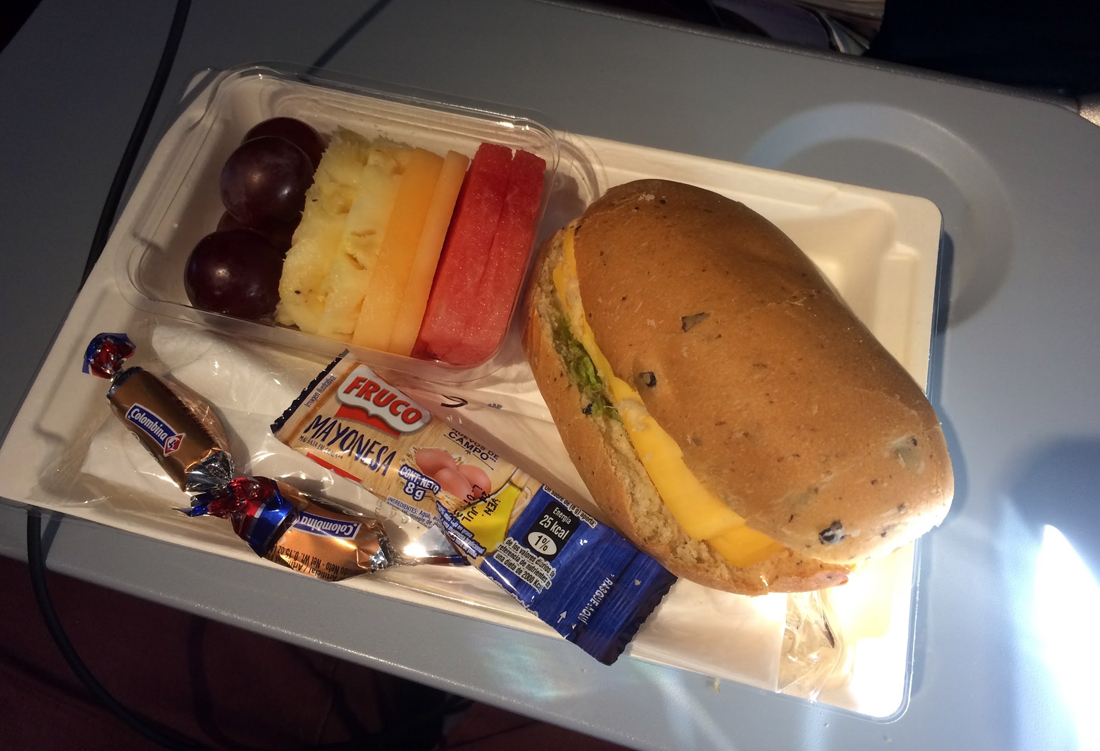 The sandwich is distinctly average, but edible. It comes in a small snack-pack which includes some fresh fruit and two chocolate toffee candies. Though underwhelming, it is appreciated to get some degree of catering.

Although the menu suggests that a second drinks service is offered prior to arrival, this does not happen. Instead the volume of water runs and Starbucks coffee runs are quite frequent. Business Class staff come to help in the main cabin when their service duties have eased. It was positive to see that when catering items are gathered in, these are all carefully sorted and hopefully recycled.

Delta’s IFE is superb and has a wide range languages for the system (up to 15). The most up-to-date systems are available on the 757. The library of films, music, TV shows, activities, interactive maps and live TV choices are superb and ample for even the longest of sectors. Complimentary in-ear headphones are distributed by the crew and these deliver an adequate quality of sound. Navigation around the system was excellent and there is a search section, as well as key selections of films e.g. strong female leads.

TV choices are some of the best in the air with a large range of boxset options. Unlike many airlines that sometimes only feature a couple of episode from each series, Delta provide the entire series. There are also a good range of Live TV stations (predominantly news and sports). Personal headsets also plug in with ease.

WiFi is available during the flight and the pricing for this appears appropriate and not overpriced for the data allowed.

A pillow and blanket are available at each seat. These are fair quality and offer good comfort during the flight. The temperature is fine in any case and there is not much need for the blanket. The menu alludes to other amenities (earplugs) being available but these are not observed to be offered by the crew today. No items are gathered in prior to arrival. As is common now at many US airports, customs forms no longer have to be completed.

The staff service onboard is variable, and depending on the crew member in your section, can appear totally disinterested. The responses to call buttons are actually prompt although are missing any friendliness. I only dare to use this once after the first response.

Staff availability in the cabin was good during meals, and rubbish collections are offered frequently during the flight. Staff could take a little more time with these sorts of service items. All staff appear bilingual in English and Spanish and easily swap between the two languages. The staff member serving my section appears melancholy and as though her mind is completely elsewhere. I see her manage only the most feeble of smiles and it is pretty clear this is not a service minded crew member.

Other crew are more engaging with customers, with one male crew member doing a lot of embracing and back-slapping with some regular customers he appears to know well.

Pre-arrival procedures tend to not begin until quite shortly before arrival into Atlanta, with crew completing checks only 10 minutes prior to landing. As noted, despite arriving nice and early we must hold at a hard stand until customs open.

The transfer process at Atlanta was organised, with great, friendly information staff and a nice Southern style of service.

Delta Air Lines offered a good product on this flight from Bogota to Atlanta. Its seat product, IFE and beverage choice were all excellent and it was impressive that all items were complimentary onboard.

The main weakness was the crew who do not have the same flair and approach to customer service and interaction as many other nationalities of crew do. Delta offer a very solid product in the US and Atlanta provides an excellent hub for regional and international connections.