✅ Trip Verified | There are two lounges in the gate 60-68 area at Newark, SAS and Lufthansa, I spent time in both, but Lufthansa is definitely better. I find Lufthansa lounges are very similar all over the world. But they are not similar across the Lufthansa group airlines. Austrian has a better lounge but worse food than Lufthansa, and SWISS seems to have the worst lounge of the three, even in their hub airport. This lounge to me, was a shrunken version of the lounge in London Heathrow. Adequate hot and cold food, choice of alcohol and plenty of seats. I noticed that there was a corner for HON circle and First class, this wasn’t roped off but simply had roses on the tables to indicate that they were for first class. Wifi was fast and easy to connect. The problem I really had with this senator lounge was the fact that the offerings weren’t different enough from the business lounge. Normally senator and business lounges are a far cry from each other, but when I hopped over to the business lounge, the offering was more or less the same, with barely noticeable differences. I would only be able to rate this senator lounge a 7, as it feels like a significant step down from other senator lounges across the Lufthansa network.
6/10

"I was rather disappointed"

Not Verified | Dilmun Lounge, Bahrain Airport This lounge is used by nearly all airlines, except Gulf Air (who have their own). Therefore it became quite busy late night when many international flights were scheduled to depart. The lounge faces aircraft in the air jetties and beyond towards the runway, although I could not see much at night. I was expecting this place to be extra special, especially going by their publicity. On entering, it looked inviting, with beautiful subdued colours and lighting. But looking around, the furniture appeared very ordinary, with some of the most uncomfortable seating. I never like sitting in one place in a lounge, especially if it's a long wait, and usually move around trying out other seating options. Apart from a few resting seats and a family room, all other furnishings in this lounge were exactly the same. I found it quite difficult to lean back and relax in these chairs. I was hot and tired when arriving and needed a shower - only a single shower room, which had not been cleaned properly after the previous user! I mentioned it to one of the staff, who was apologetic. On the dining front, there was a good selection of finger food and vegetation options as well, but the few hot food items looked unappetising. The drinks were plenty, including high end alcoholic brands. Overall, I was rather disappointed. I am not sure I can recommend this place, but then there is not much choice either. Hopefully, once the new terminal is opened, there should be more lounges and a better experience.
5/10

"it was perfectly adequate"

Not Verified | Business Lounge Frankfurt Terminal 1. I was politely welcomed and informed my flight was all good to go and on time, and how close my departure gate was. I observed was how bland this lounge looked. Although there were several types of furnishing, scattered all over the place, with no particular layout. However, the food and drinks areas were beautifully arranged and lit, making it enticing. Nice beers with description notes and a good selection of finger food, with a few options for hot food. The seating areas were unimpressive lacking in design. I would recommend this lounge for its food and beverages display, and for a short stay, it was perfectly adequate.
6/10

"fine for a short visit"

✅ Trip Verified | Business Lounge Terminal 2. As I hadn't been to this lounge for nearly two years, I was curious to see if there were any changes or improvements. I was there at breakfast time, and the food was bacon, tomato, scrambled eggs etc. The bacon was hard and dry. One of the coffee machines were broken. But I shouldn't really complain, as there were a few other drinks and food options. For me, the lounge is fine for a short visit. For the longer stays, there are a few resting seats and a conference room with computer facilities.
6/10

"variety of food is subpar"

✅ Trip Verified | The Lufthansa Senator Lounge in Stuttgart is one long room with excellent tarmac view. The lounge consists of two section which are divided by a 1.8m high partition wall: one section is the buffet with tables, the other section consists of old-style armchairs with power outlets. Variety of food is subpar. Nothing special. Fairly large selection of booze. All in all not one of the best Lufthansa lounges. Certainly a good alternative to the movie selection on a long haul flight. 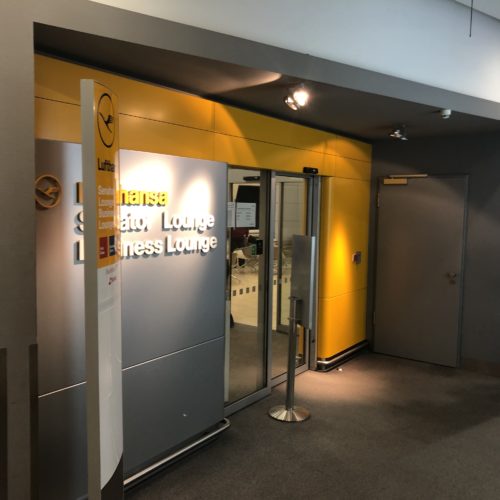 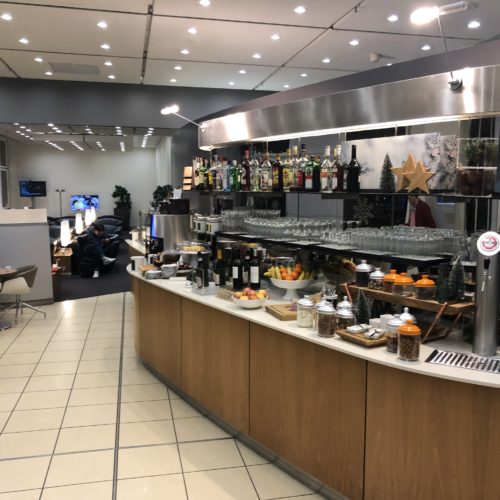 "lounge gets my thumbs up"

✅ Trip Verified | There was full English breakfast on offer, and some delicious pastries and croissants. The coffee was just right. There were sufficient seats and a variety of them. The decor was very classic, very contemporary. Luckily this lounge still has the Lufthansa yellow as opposed to their newer navy blue rebranding. If I had to fly intra Europe from Heathrow, I’d be happy to use this lounge again. If I’m flying long haul, I’d probably try the Singapore Airlines or United club as those are probably better. But for a short haul lounge, this lounge gets my thumbs up. I used this lounge simply as I couldn’t be bothered to walk to the satellite at Heathrow T2 until my flight was called for boarding.
8/10

✅ Trip Verified | Very nice Lounge, that is even bigger then some of the senator lounges in German airport. A very nice view over the airside. A Privilege of lounges outside home bases ist that the few flights are announced in the lounge and the passengers are requested to board on the right time with a direct access to the boarding gate. Very efficient. I like that.
10/10

✅ Trip Verified | The airport lounge in Kiev that Lufthansa use is surprisingly good. Comfortable, clean, good selection of drinks and snacks, polite staff. Smoking room is right inside the lounge, which is super convenient for smokers. Lounge is large and easily accessible. It's not airline specific, but any business class passenger can get an invitation to use it. I was impressed and very pleasantly surprised.
9/10

✅ Trip Verified | Delights to Go location: Instead of a lounge, the Delights to Go area is a self-service counter next to Gate G19 where two vending machines distribute snacks. After scanning the boarding pass, one can choose between three different snack boxes. The idea is to offer an option to passengers that do not have time to visit the lounge. Access rules: The usual suspects are allowed: Basically same as to a Business Class Lounge (M&M HON, SEN, FTL, *G, F, C). It was possible to go to the regular lounge before and then grab a snack at the Delights to Go area prior to my flight. As the name indicates, this is not a lounge but a quick option to pick up a snack box. There was an attendant who scanned my boarding pass and let me in. As Star Alliance Gold, I could have brought a companion. Delights to Go offerings: There are two identical snack box vending machines and two coffee machines on the left side and a service counter on the right side. While the coffee machines can be used without scanning a boarding pass, a snack box can only be retrieved from the vending machine by scanning the boarding pass. After scanning, I had a choice between three food bundles: - Balance: Goat cheese wrap, seeds with raisins, fresh apple, still water. - Classic: Tunasalad, Honey spiced almonds, fresh apple, still water. - Local: Meat Loaf Croissant, Brezel with sour cream flavour, fresh apple, still water. These choices vary and on a different occasion the local option was called Oktoberfest and contained a sausage salad, a bag of pretzels, a fresh apple and still water. This time I chose the Balance option. It took some 20 seconds until the box was dispensed. Lufthansa branded paper bags were available to carry the box. The wrap was quite tasty but I didn´t like the small apple too much. I would have preferred a packed fruit salad. It was a nice snack but I would not consider it a replacement for a lunch. In theory, only one snack box is given per boarding pass. Both machines are connected to each other and it was not possible to scan the same boarding pass at each machine. The machine was also smart enough to figure out that the actual printed boarding pass and the boarding pass on my phone are the same and it showed me that my boarding pass had already been used. But I did find a work-around: When I changed my seat in the Lufthansa App an updated boarding pass was shown on my phone. Even though my boarding sequence number remained the same, I could pull another box. It was also interesting to see that the machine apparently does not take booking class or status into consideration: The week before I was flying with my partner (different reservation, no status, economy class) and she also received a snack box. It seems like once you are in the Delights to Go area you can scan any Lufthansa boarding pass. In fact, there was a dad scanning boarding passes and getting snack boxes for his three children and his wife who were waiting outside. It would be interesting to see if boarding passes of other Star Alliance airlines or even of non Star Alliance airlines are accepted by the machine. After my return flight I wanted to try if the machine Also gives out a snack box for arriving passengers, but the agent refused to let me. Verdict: The location of the Delights to go area could be closer to the main security gates. If you have to go to the satellite or the international gates this means a detour. The taste and the quality of the food are quite good.
8/10

✅ Trip Verified | Surprising very nice lounge of Lufthansa at Washington Dulles. Best Lufthansa Senator Lounge standards, with direct access to the boarding gates. I really love it like this - just stay, enjoy and board when announced.
11 to 20 of 172 Reviews