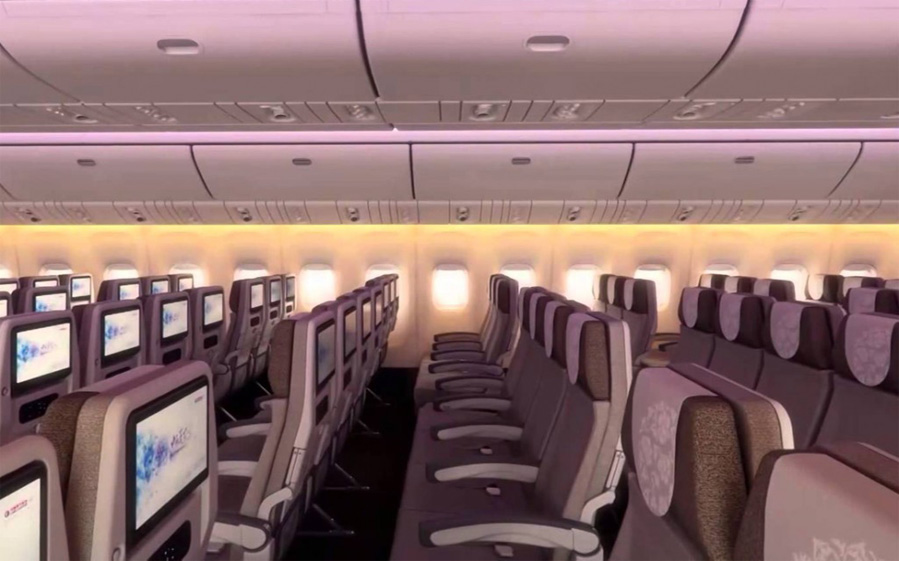 China Eastern Airlines has a large aircraft fleet, and long haul international flights are normally operated by their newer Boeing 777-300ER aircraft and Airbus A330 aircraft.

Shanghai Pudong International Airport has two main terminals, Terminal 1 and the newer Terminal 2 – walking time between the terminals is about 15 minutes. China Eastern Airlines operates from Terminal 1, as does its subsidiary, locally based airline, Shanghai Airlines.

Check in service is at a reasonable standard in Shanghai Pudong Airport, and there are many self-serve check-in facilities. Waiting times for check-in at Shanghai Hongqiao tend to be slowest for peak period domestic flights. If you need English language assistance at check-in, many staff have adequate language skills or they can call a supervisor.

China Eastern Airlines domestic First class lounge at Shanghai Hongqiao Airport is quite spacious, but at peak departure times you may find it hard to locate a free seat space. Lounge catering is supplied by an outside, Western hotel chain and the standards are quite good. WiFi is available, although speeds mirror many Chinese airport standards by being slow.

The international First and Business Class lounges at Shanghai Pudong Airport are quite limited, and will be replaced in the coming years with a new facility. They are made up of several lounge choices, each being quite small and lacking in facilities that you would expect at a major global hub. Not the place to relax for long periods, and don’t expect much in the way of business facilities or in-lounge catering options.

On international flights, China Eastern Airlines offers First class, Business and Economy class on some aircraft, whilst others will have just a Business Class and Economy Class cabin.

The new Boeing 777-300ER aircraft provides seat pod style flat bed seats, in a 1x2x1 layout. The seats are spacious, offer good privacy and there is a large IFE screen. A nice duvet and pillow is supplied. The onboard catering is considered satisfactory, and normally the Chinese menu is of a better standard than the Western meal options. A good choice of wines are available. An amenity kit is provided, slippers and nice pyjamas (it is advisable to select the largest size for comfort). Cabin staff service can be good, but there are variations and a lack in service consistency. Most cabin staff have some understanding of English, and staff language skills are improving year on year. The language skills are based around a standard set of phrases, and you may find that staff will not understand if you go off-script. The choice of reading materials is limited – you get English language Chinese newspapers offered, and maybe Time or Newsweek, but little other choices are available. The IFE system is reasonable on newer Boeing 777-300ER aircraft, and a choice of Western movies is offered, as are Western TV programmes. However, don’t expect much in the way of new releases and many movies are quite old.

The newer Boeing 777-300ER aircraft offer nice flat bed seat pods, arranged in a 1x2x1 layout. There are older angled-flat seats on Airbus A330 aircraft. A nice duvet and pillow are provided. Pyjamas are not provided, but you receive an amenity kit and slippers. The onboard catering is quite similar to First Class (apart from some presentation format difference), and you will probably find that Chinese menu standards are better than Western options. Cabin staff service is efficient through the meal services, and same comments apply to language skills. The IFE system is patchy, and you may find that the responsiveness is very slow. Choice of reading materials is limited – you will get English language Chinese newspapers offered, and maybe Time or Newsweek, but little other choice. The IFE system is reasonable on newer Boeing 777-300ER aircraft, and a choice of Western movies is offered, as are Western TV programmes. However, don’t expect much in the way of new releases and many movies are quite old.

China Eastern Airlines Economy class seats provide a reasonable comfort level, with an average seat pitch and legroom. For the Cabin Seat Layout plans, we suggest you refer to our Airline Seat Plans guide where you can view China Eastern Airlines aircraft cabin layouts. A blanket and pillow are provided, both meeting a reasonable standard. The Economy class onboard catering is considered satisfactory, with a choice of Chinese or Western meal options. Quantity of food supplied is okay, but don’t expect culinary delights on most routes. Chinese tea is served with the meal and you might have to repeatedly request from staff if you want to get a beer or wine served – and these are often served warm and not chilled. The cabin staff tend to be younger in this cabin (compared to First or Business) and most of them are enthusiastic and offer a pleasant demeanour. They are trained with standard English language phrases, and you may find that some questions you ask are met by puzzlement – persevere and they will normally get an English speaking member of staff to help. The IFE system is reasonable on newer Boeing 777-300ER aircraft, and a choice of Western movies is offered, as are Western TV programmes. However, don’t expect much in the way of new releases and many movies are quite old.

The majority of China Eastern Airlines domestic flights are operated by narrowbody Airbus A320/321 and Boeing 737 aircraft types, although some busier routes may use Airbus A330 aircraft. The onboard narrowbody product comprises First / Business Class seats configured 2×2, and standard Economy 3×3 seating. A proportion of these China Eastern aircraft are quite dated and worn inside the cabin, with well-used seats and cabin décor. In contrast to Air China, China Southern and Hainan Airlines, many of these domestic China Eastern Airlines aircraft seem rather tatty in appearance and presentation. A meal or snack is normally served in both cabins, subject to flight duration – shorter 60-90 mins flights and you are lucky if you receive even a beverage in First Class.

It is worth remembering that there are clear cultural differences amongst many Chinese travellers, and some of these may be disconcerting to western customers. This is an area that the Chinese government has been trying to address in recent years, and in 2013 the China National Tourism Administration published a 64-page Guidebook for Civilized Tourism (encouraging better manners). As far as air travel is concerned, you are likely to notice that queuing is often disorderly and when for example flight boarding is announced, there can often be a rapid stampede of travellers pushing and shoving to get through the gate quickly. Loud talking (almost shouting) is another trait you might find disconcerting both on the ground and onboard flights. Spitting remains an issue despite educational promotions to stop this. Despite airline’s best efforts to keep passengers seated after landing, you may also find a number of passengers standing up to retrieve luggage whilst still taxiing. We guess that bit by bit such practices will gradually improve in coming years, but don’t forget there are 1.4 billion potential Chinese travellers.

China Eastern Airlines is playing catch-up from a quality perspective when compared to China Southern Airlines and Air China (as one of the 3 Government owned airlines), and their new fleet additions on long haul routes offer a considerable improvement. You would not choose a Chinese airline if you must have standard western food and amenities during a flight, and it is also important that you don’t expect every member of staff to be able to chat to you in English (or other language). Staff are generally well trained and provide service in quite a regimented and disciplined manner, and remember, they often have to deal with very demanding Chinese customers. China Eastern Airlines is a good choice if you are planning a trip to China and want to fly into Shanghai, although their standards are currently not as good as China Southern Airlines or Hainan Airlines.