✅ Trip Verified | Waiting between flights from UK to Tel Aviv, night time facilities non existent, there are seats but if you are not aware of them you wouldn't find them tucked away behind the closed restaurant. Gate opens at 4.00 so why are the staff so aggressive at the start of the day? Why is it that everything that went through x-ray in Liverpool and sanctioned as OK was then removed in Vienna? Why having gone through x-ray did they still feel the need to body search? I have no issue with that, but the aggressive and overly intimate attention is not called for, without notification. I asked for a name to speak to and was refused yet there is a customer survey stating exactly my concerns. Be warned.
4/10

✅ Trip Verified | No seating. Poor optimisation of security. Overall a very poor experience which is a shame for a relatively small airport. I will not choose to use this airport in future.
4/10

✅ Trip Verified | Very poor seating options for passengers unless you spend money. Lots of space where they could have put seats, so it must be a deliberate policy. Good wifi. Expensive shops and foid options.
2/10

"no great choice of food"

✅ Trip Verified | It was some years when I last visited this great city, and when I arrived in the evening of 20/10 I could never believe the overall disappointing picture of this airport. You walk in and you are among crowds of coming or going passengers, a mixture of everything, total confusion, walk a mile for your luggage, no moving walkways. For our return flight (23/10) I realised that there is no great choice of food, no seating space apart from the gates, toilets were in a mess and the same total confusion.
3/10

✅ Trip Verified | A great city of Vienna has a great choice of the airports: you can use either Schwechat located near the city limits or Ivanka located 70 km from Vienna, actually in Bratislava, Slovak Republic. Some may think that going abroad to have a flight may be a strange idea. But VIE makes this choice have sense. Widely advertised CAT (City-Airport Train) where travel time is just 15 minutes turns out to be added to 30 minutes of waiting time which makes the total travel time 45 minutes. WiFi in the rail lounge contains no Internet (smart and funny). The price tag is 12 euro one way which seems too much for such a short trip. Also, the train leaves Vienna Mitte station which is somewhat far from Hauptbahnhof. The train is double-decker which seems quite strange: people with bulky luggage have to storm steep stairs up and down because neither upper or lower deck is levelled with station platforms. The airport is under renovation which means going outside to travel from check in desk to the airside lounge. The airport layout is confusing and out of logic, so it is split onto zones with individual security lanes each. Security lanes are not manned fully, so queues are despite not long, are extremely slow. Passport control is before security and fast enough. Duty-free is also before security, so your drinks over 100 ml will be confiscated (smart and funny again). After security, you get to a small compartment where bus gates are located. it has a toilet and a couple of vending machines. Bus boarding is also slow, the car (just one per the whole plane) gets overpacked and then arriving at the plane you stay on the staffed bus for an extra 15 minutes. Food options are limited, boring and overpriced. So if you fly somewhere from Vienna do yourself a favor, go via Bratislava Ivanka. You'll spend 5 Euro on the bus instead of 12 on the train, you'll spend the same time to reach the place. And Ivanka airport facility is simple, nice and easy to use.
5/10

"shocked to see the state of toilets"

Not Verified | I was absolutely shocked to see the state of toilets at Vienna airport both on arrival (5 October) and arrival (12 October). The toilets were all disguisting and some were so bad nobody used them. The smell of them was very unpleasant to put it mildly. They are clearly not cleaned on a regular basis. I wonder how an airport in a country like Austria can let this happen. I've been using this airport for over 10 years and I've been happy so far (at least with the toilets). When I landed at Heathrow, I used the toilets there too and they were absolutely sparkling clean and smelt good too.
2/10

✅ Trip Verified | Horrible airport workers attitude, yelling, sarcasm, treating people like they are stupid. I was planning to visiting the city and spend a few days, I completely changed my direction. The people in the airport are a reflection of what it looks like. The airport is disorganised, very dirty bathrooms, not enough seats, restaurants and shops unbelievably expensive.
1/10

"It is disorganized and chaotic"

Not Verified | In all my decades of air travel I have found this to be the worst airport I have used. It is disorganized and chaotic for those attempting to make a connecting flight here. There is no sign to help arrival passengers who need to make connecting flights. There is no information counter to obtain clarification about anything. Even the Austrian Airlines service desk was unoccupied at 8am on a weekday. Some hand baggage and passenger screening personnel are incompetent. They do not even attempt to tell passengers what to remove from bags before screening them This leads to secondary inspections for some passengers carry ons and extended delay in making a connection flight. The Austrian Airlines staff attitude of indifference to customer service adds to the problems of mismanagement of this airport. The list goes on. In future I will by pass this airport and Austrian Airlines.
2/10

Not Verified | What a terrible airport. Horribly organized. Not a place to sit at terminal D, unless I buy a coffee or pastry. No thank you. I will not be flying through here again. 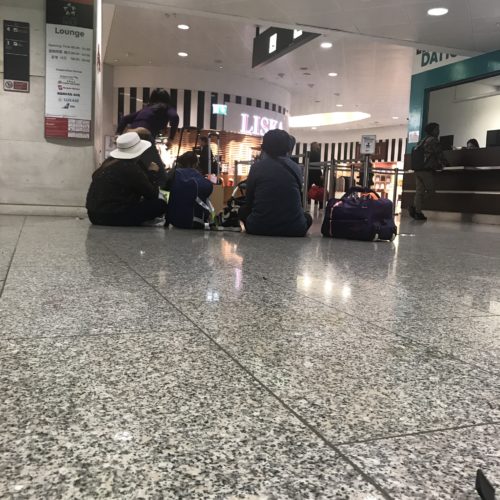 "The airport is chaotic"

✅ Trip Verified | I am traveling with my dad who is 87 years old and needed wheelchair service. Airport is crowded and chaotic with no sign of wheelchair service to be found. Went to information centre to ask for directions. Information center has no idea and I had to call for hello service with the phone next to it. The person over the phone instructed me to go to the next floor up despite me clarifying with him twice that I am on the 2nd floor near the Airline checkin and if I still need to go another level up. Went up then came down again to look for it and found it close to the information counter. Just as we wanted to enter the Airline wheelchair service counter we were blocked by a man telling me to use the self service counter to check in. I look at him and say I am here for the wheelchair service for my dad who is 87 years old. And he says loudly you need to pay for the service, are you willing to pay for it? All airlines provide this service for free! I managed to get the wheelchair and push my dad myself. At the security check the lady at the belt saw me pushing my dad and she straight away told me off that I could not simply take the wheelchair without requesting the service! Why did she assume that I had taken the wheelchair without requesting the service? I am actually helping by doing it myself. Obviously she had no clue that we could ask for the wheelchair service and do the pushing ourselves! In Summary (1) Majority of the Vienna airport staff do not know their job or how things work. (2) Their command of English is subpar (3) Their attitudes are condescending and lack of customer focus (4) The airport is chaotic and needs to be looked into in how to manage and improve the service flow. (5) Training needs to be provided to the staff.
21 to 30 of 243 Reviews