Not Verified | Queues everywhere! We arrived at the airport and had to check in as we had booked with an external company so couldn't check-in online. There were 3 check-in desks for our flight, ONE of which was open for the first half hour. One more desk was then opened and then one more after an hour queuing. We queued here for about 1 hour 45 minutes, just to check-in. Afterwards we found ourselves in the security queue which was another 20 minutes. Got through security with about an hour to spare before our flight was due to board. Got through, found what departure gate we had to go to. It wasn't far, however it took us almost an hour and a half again to get through the passport control. We were told by one of the girls working there that one line would be quicker than the other, boy was she wrong - she told us to go the queue where theres an actual human checking the passports, but it took forever - the lads checking passports looked like they couldn't give a damn. At this stage I'm in a panic thinking the boarding for my flight is finished - it's 11.45, flight due to leave at 11:55. I rush to the departure gate to find.......ANOTHER QUEUE!!! This queue was to show boarding pass/passport - fairly standard procedure. Once we got through this, we had to queue again! This time for the shuttle bus to take us to the plane. Arrived at the airport at around 9, and by the time we got on the plane it was 12:15 for an 11:55 flight? 3 solid hours of queuing, not easy for me, a 28 year old, imagine the poor kids/elderly people that have to go through all this too! They need to up their game in this airport, do away with the passport control in departures, it's not something that's done in all airports. It's an airport I will be avoiding - which is a shame as Venice is somewhere I would love to spend some time, but won't be doing so if this is the case all the time. Anything I have picked below as N/A is because of all the queues I had no time to look into any of it!!! Where you're supposed to find the time in 3 hours queuing good only knows!
8/10

"small but everything is working"

Not Verified | I always start my flight from this airport. It's small but everything is working. My last departure from VCE was in February with a flight to Doha. Check in was quick, security control was normal (yes maybe the staff are not the most friendly in the world but much better than CDG for example) and Passport control through the e-gate was fast. Nothing to say about the Shops. Luxury Italian brands are present, food is good but a little bit overpriced.
2/10

"Not a good experience"

✅ Trip Verified | Security were so rude and thought their role gave them a right to be condescending and gave them the right to treat people like dirt. Very little choice food wise and very expensive. Not a good experience - worst country to travel out of as Rome security were rude last year as well.
1/10

❎ Not Verified | People with chemical allergies: Avoid this airport at all costs - some idiot decided that after renovating the airport (which by the way looks awful now, really cold and windy) thought that it was a good idea to spray toxic (par)fumes in all the arrival/departure area and especially in the toilets. I am in pain with asthma now, please if you suffer from chemical sensitivity write to the airport to complain.
6/10

❎ Unverified | This airport is overcapacity presumably because of the current popularity. Chack in desks are on the main floor in various buildings as the airport kept expanding. You may experience long walks. Flight gate areas are overcrowded. Restaurant/shopping facilities are okay. Once you are past passport control there is only one snack bar and duty free. So, leave extra time for the whole process and buy what you need before passport control.
2/10

✅ Verified Review | The worst airport i've ever used. The car rental return facility is located very far from the terminal and not easy to find. You then have to carry your luggage a considerable distance, more than 1 km, to get to departure floor. You then find out that you have to leave them at the arrival floor! Fortunately, I registered on-line with my airline, other wise I would have to wait for a good hour to drop them off and get the boarding pass. It is now 11:30 am. You then have to get to the departure floor to go through security. You find with horror that the waiting line goes from one end of the terminal to the other and back. We finally go through security. It is now 12.40, pm. We then find that there is another line for passport verification. We are through at 13:30 pm. The officer barely look at the document. We finally reach the gate at 13:35. The boarding has just started, even if it was to start at 13:05. New line to check boarding passes then wait for the bus that brings passengers to the plane. We are in the plane 13:50. The plane takes off at 14:15. This airport is way over capacity. The process should be simplified - airport staff at baggage drop-off should check passenger documents as at other airports. Staff are helpful, but overwhelmed. Wifi doesn't work. Few restaurants, but anyway because of long waiting time in queue, not time to eat or to shop
8/10

❎ Unverified | We departed from Venice Airport on a Saturday at early afternoon, and so it was very busy. Long lines for security, but took only about 10 mins to reach checkpoint. Officials brisk and efficient, so minimal delay. As we were going to Amsterdam there was no need for passport control, but then a long wait until gate announced, but lots of seating and quick free wifi. Flight information displayed on small overhead screens, and gate only announced 60 mins before departure, so leaves some confusion as to which part of airport to wait in - better flight information needed. Ground staff at adjacent gate were carrying out a comprehensive check on size of cabin bags, with some very unhappy passengers who were clearly trying it on. Unfortunately this procedure was not applied at our gate, with the result that the lockers on our aircraft were chock full, and some bags had to go in the hold. Why don't airlines and ground staff apply their own rules?
2/10

❎ Unverified | We were happy to have passed check-in and security under 40 min so we could relax and grab a bite for lunch before our flight to Montreal, then we were just shocked to see what was waitting on the other side! Just horrible. Totally disorganized airport. Wait for passport control is around 2h with a 300m line and no clear indications. So including check-in and security, that's close to 3h on your feet. There is no priority line for children and although my daughter is 10, that's a long time just waiting! Just an overall horrible customer experience. 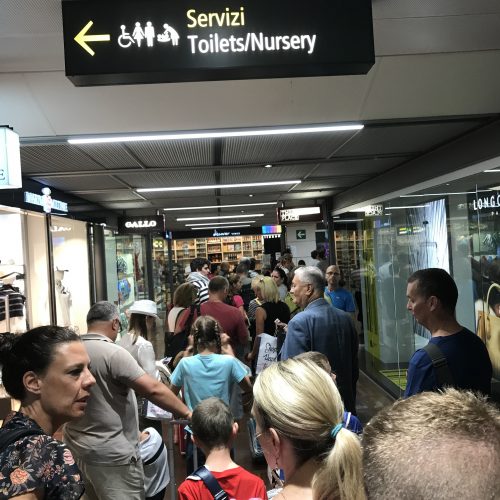 ✅ Verified Review | Venice Marco Polo Airport - In these days of extreme terrorist actions throughout the world and specific attacks at international airports we were amazed when a fellow passenger at our allotted departure gate found an unattended piece of luggage and was told by the boarding staff to pick the item up and take it to the police upstairs. The passenger, quite correctly, refused to do so and told them to take some action. The request was ignored and the item remained unattended for some time until another passenger again complained to a different airport employee but this was also received with the reply "Just pick it up and take the escalator to the next level where you will find the police kiosk". Needless to say this passenger also refused to do this and after several minutes a very reluctant airport employee called someone we assumed was security staff and the item was removed. Now we all knew we had already passed security etc but this item of luggage could have been placed there by anyone and contained anything so to ask passengers to approach, never mind pick up and carry is disgraceful and reflects poorly on this airports security policy.
3/10

✅ Verified Review | No jet bridge available so we arrived on a remote stand and then an announcement said that they could not find any steps to offload us onto the bus. Eventually we arrived at the immigration queues which were chaotic but followed a few others from the flight into a line only to be told as we were about 6 from the front that we had to go to a massive queue the other side of this area as that had 4 automatic passport gates. This queue was taking forever but the queue we were in previously was empty, and to add insult to injury we saw about 50 people arrive and immediately get ushered into the one we had been thrown out of. The staff there are useless and do not listen to reasonable arguments. Eventually we got through but had missed a water transport connection as a result. In addition this airports toilet facilities are far from hygienic, their announcements and some signs are not clear. Needs big improvements.
21 to 30 of 113 Reviews