"the worst service ever"

Not Verified | I have been on holiday so many times, but never have I encountered such rude airport staff in my life! Me and my partner missed our flight after spending a week away in Tenerife. On our way back, we checked in at 7pm, as our flight was 21:55pm. When checking in they told us that our flight was delayed by 1 hour 15 minutes. I can also put Thomas Cook to blame for part of my complaint, as the lady who checked us in had the worst service ever. No apology for our delayed flight either. We were sat around for hours, checking the board constantly, waiting for the gate to be displayed. Ours was the only Thomas Cook flight that night, so it was clearly shown on the board at all times. Finally it said our plane would board at gate 24, when we made our way over we sat amongst everyone waiting. We lined up at boarding, only to be told we had missed our flight and they were calling out for us for 25 minutes. Rubbish! Apparently it was gate 28 the flight left from, however at gate 24, on the screen it stated Thomas Cook, London Gatwick. I am yet to contact Thomas Cook but I am mainly writing this review as the way we were treated after missing our flight is appaling! We were laughed at by several members of staff. I was in distraught as we had no where to stay and it was gone midnight so everything was shut. We spoke to airport staff and even someone who worked for TUI. We were not spoken to with consideration and made us out like we were stupid, bearing in mind you could see we were frustrated and upset. Aside from us missing our flight, if we were spoken to in a better manner I would not be writing this. By far the worst experience ever. It’s put me off going back to tenerife. Rudest people ever. Only one lady who actually helped us, and she worked for a taxi company. Disgusted is a far nicer word than I can think of at this point in time. Would give 0/10 if I could.
10/10

Not Verified | As always, I found the service here very good, and the staff helpful. But, my review,today, is for the special assistance service. This was my first time of using this service, and, I was very pleasantly suprised as to how helpful it was. The staff were pleasant, and I was assisted from booking in, to boarding the aircraft, with no fuss. A truly excellent service.
4/10

"my gripe is lack of information"

✅ Trip Verified | Dreadful 19 hour delay, caused by the weather, but my gripe is lack of information, and no provisions supplied for a delay of that length given by the airport, all the shops shut apart from one which couldn’t cope and run out of almost everything. Our vouchers when we got them for food couldn’t be used for sometime as they had problems with the WiFi. Regardless of if it was our travel agent Thomas Cook lack of information supplied to the airport staff I don’t feel they were helpful enough and were actually quite dismissive when myself and other passengers asked for help. The toilets became very dirty and ran out of toilet paper, I can’t believe there is no plan for such emergency situations where so many flights are cancelled.
7/10

✅ Trip Verified | Arrival all ok, biometric passport readers in use, work well but as none are standard it can take some time to get through. Fingerprint is also required. Odd part was no immigration on departure. Bags a little slow to be delivered but overall a good experience. Departure, great space and facilities at check in hall, shops restaurants etc, security loud but efficient, after security huge duty free shops, and in fairness good choice of eating and drinking, just not enough seating area. Gates had very few seats so everyone stays in the cafeteria seat hanging on until flights called so it’s very difficult to find anywhere to sit with your drink and food, and given the limited choice on flights these days the airport facilities are in great demand prior to flights, just doesn’t seem the airport can adapt.
8/10

"A tale of two halves"

✅ Trip Verified | This review is for Tenerife South Reina Sofia airport. A tale of two halves. Arrival experience wasn't great. They insist on sending people through complicated automated passport readers (including thumb print) which seem to fail with every other person and need around three employees monitoring them. However once through the experience is OK. Departures completely different and most pleasurable. The range of shops and eating places is good and the security was well manned, pleasant personnel, and all lanes open. UK airports should take note of this.
1/10

"he was screaming at me again"

❎ Not Verified | We got off the plane and headed for passport control. With a biometric passports we chose the automated checks. There was a slightly different system to what I’ve come across before in that you also place you finger on a pad that records your fingerprint. This is then used at another set of gates manned by a passport policeman. At the said gate you place your finger on the pad then proceed through the gate. As far as I’m aware there were no visible instructions in English. When I got there what I didn’t realise is that the gates hadn’t closed after the previous person had passed through, I placed my finger on the pad and walked through the gate to find the policeman screaming at me at the top of his voice "get behind the door woman". I had no idea what I had done wrong so went back, put my finger on the pad and stepped through the gate (which still hadn’t closed) and he was screaming at me again "get behind the door woman". I did not know what to do. I looked behind me and the gates had now closed so now I was stuck like a rabbit in the headlights with this man screaming at me. Eventually the system must have caught up and verified my fingertip and I was allowed through. My initial reaction was anger but by the time we got to the luggage hall I was in bits. Normally a confidant person I cannot believe how much this has affected me. I stood there in the middle of the airport and cried. I would gladly have got a plane straight back home. Other travellers actually came up to me and said that the way I had been treated was disgusting but what can I do. At this moment in time I don’t feel like ever travelling abroad again and I seriously doubt that I will ever come to Tenerife again but who knows. This experience has definitely knocked the stuffing out of me.
2/10

"I have never felt so humiliated"

✅ Trip Verified | I have never felt so humiliated or had my dignity so fully removed as I did on my way home from Tenerife. I am in a wheelchair and with my family being young I hate complete strangers pushing me preferring my husband or father to do it. I was refused this at the airport with them insisting they took me through and yes they say it’s quicker but I’d prefer to be treated like any other person and wait to go through. It’s a vital service for people who don’t have someone with them to help but there were ten of us so I wasn’t short of assistance from family and they were so busy it took 45 minutes to get someone to take me through when I could have done this without their assistance thus freeing the staff up to help people who needed them.
3/10

"No warnings were given"

❎ Not Verified | Returning on 29th December from a Thomson "Dream" cruise, return flight to Luton, I had my wallet stolen during the rush of retrieving two suitcases from the coach, no Thomson staff present, I first noticed wallet missing as we were waiting in line to check-in. Later during police interview a further two men arrived from two further Thomson cruise coaches, this time for flights to Manchester and then a further coach for a flight to Glasgow. All three of us were bumped/jostled by a woman at the time of suitcase retrieval. No warnings were given by Thomson of problems at the airport but clearly coaches are being targeted by pickpockets, Thomson staff are not to be seen on the return coach journey. Local police had pictures of suspected females but too few staff to stop it.
8/10

✅ Verified Review | I would like to thank Air Europa check-in personnel for their professional work. They were polite and warm at all times. Very good a/c temperature, lots of natural light and large and clear signs to move around the airport. It was very difficult to find a portable electronic devise power plug. Very nice 'barraquito' coffee. 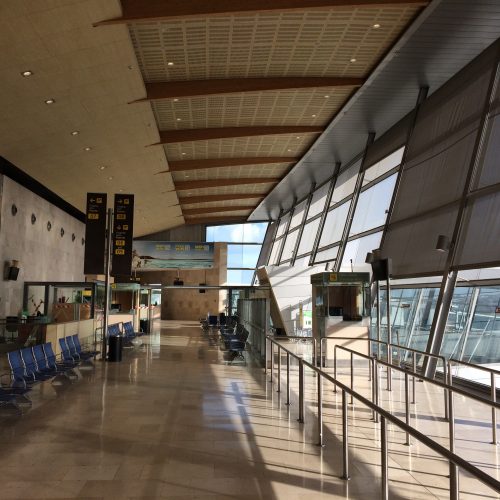 ✅ Verified Review | A dirty airport with aggressive security staff that pushed me across airport security as they wanted to close. Very rude and unacceptable behaviour. It's not that I'm slow, I was just trying to get my laptop out of its bag but not quick enough for security. The seating was disgusting and was full of food left by by passengers. A nice island though.
31 to 40 of 60 Reviews