✅ Trip Verified | Make absolutely certain that you've enough time for transiting flights - plus a healthy margin for error. Don't rely, as I did, on the assurances of check-in staff at your initial departure point, that 45 mins would be plenty of time, or that the first and second flights arrived and departed from the same terminal. They didn't. My first flight was late, the second flight was in a different terminal, and to complicate matters, the next flight requires security checks to be done at the next gate. Barely caught the flight. Mercifully there were no temptations to stop and look in a shop, as most of them were closed. Singapore Airlines all the way through on one ticket, by the way.
9/10

"it was a good experience with Changi"

✅ Trip Verified | Overall it was a good experience with Changi. Not all shops were open yet but you still can had a good shopping experience in it. The only issue spotted was staff handling boarding weren't talking professionally to passengers. I understood that one could easily get exhausted and angry when he/she had to explain again and again only rear rows were boarding especially the airline didn't print group number on the boarding pass. But one could also easily resolve it by writing the boarding rows on an A4 paper. Also the queueing time at check-in is much longer than pre-covid.
2/10

✅ Trip Verified | Most businesses and amenities were closed at Terminal 3. Those that were open appeared to be poorly staffed and under stocked, leading to confusion and crowds. Baggage delays were experienced on arrival, and poor information was given by staff on departure.
10/10

"staff were welcoming and friendly"

✅ Trip Verified | It's really nice to see that Changi is almost restored to its former self after this pandemic. Airport was wonderfully clean and spacious as it usually is. Not all dining options are open yet, but there is still plenty of choice available regardless. I had to overnight and I found a transit lounge but they had no beds available. Despite this, I did have somewhere quiet and comfortable, and was able to get something nice to eat. Kudos to the staff who were welcoming and friendly. I would definitely stay there again. Price has increased significantly, but of course this is due to the pandemic. Lots to see, lots to do at Changi. It deserves to be voted as one of the best airports in the world.
3/10

"little by way of organisation"

✅ Trip Verified | Let's talk about the boarding procedure at Changi Airport Terminal 3. Users of Changi will know the security for flights at Changi is typically at the individual Departure Gate. Unlike at other airports where it tends to be before entering the Terminal (either as a transit passenger or a passenger departing the country). At Terminal 3 they've decided to do all the security for 4 gates, you are then in this little pig pen with 3 other flights, potentially 1500 people, it's not big enough. The lines for the different flights cross each other, and there is little by way of organisation. No one seemed to be in charge, when I politely mentioned it didn't seem very organised I was met with a blank stare. I didn't expect this at Changi Airport. I have been in other airports in the South East Asian region which were chaotic, and where the queuing system had broken down, with people pushing into lines ahead of others who had waited patiently, on one occasion barely making my flight. Changi, though, is a byword for excellence. Who is in charge there? What was the motivation for cramming 4 flights into a pig pen? 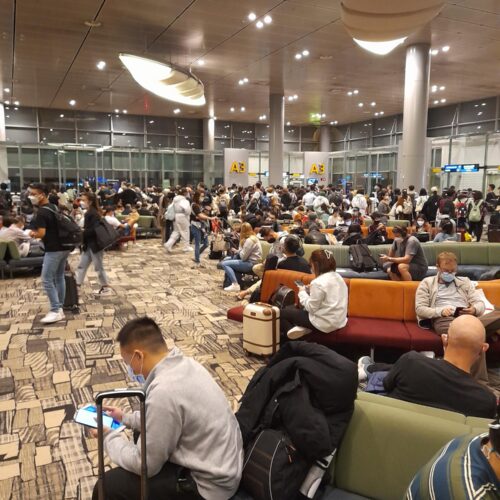 "airport is big and beautiful with great services"

Not Verified | This airport is big and beautiful with great services. A lot of seating areas with beds for you to take a good sleep between flights. The restrooms are everywhere with big sign for you to see clearly. WiFi is fast and easy to connect with no register required. Computers everywhere for you to use if you need one. Inside this airport is just like a garden and amusement park combined. Great food, great view with many entertainments all over.
7/10

✅ Trip Verified | The Singapore Changi Airport is very good. There are many trees, entry and exit very quickly without any difficulty. But I do not appreciate the airport's wifi it was very bad. 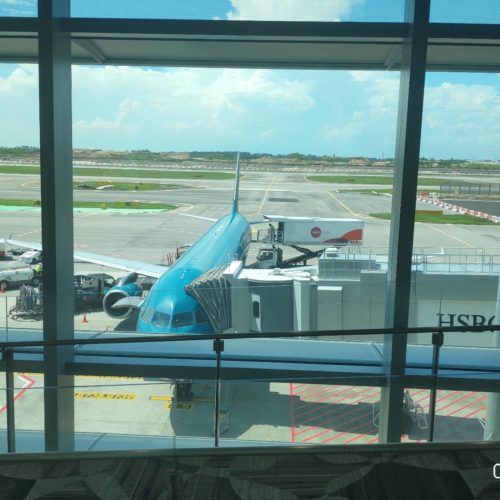 ✅ Trip Verified | A bad experience transiting through Changi airport. Airport is great with all the shops and cozy places to eat. Despite it all, my last two times in transit through Changi airport I'll never forget the rude service from immigration staff. I just gently touched the autogate door and the person in charge standing in front warned me that if I broke it I would have to pay for it. Second time also in transit, when it was my turn to check my passport the immigration staff complaints that my passport cover is so big. He needs to take my passport out of my cover. If unwilling to do just let me know. It is just an super easy thing to do!
10/10

"The one and only Changi!"

Not Verified | The one and only Changi! This airport creates the rules for all the others. Perfect decoration, perfect smoking lounges(actually gardens!), even cinema and the famous waterfalls! Even the baggage pick up room is fantastic with the hanging gardens.
5/10

"This airport is very overrated"

✅ Trip Verified | I was flying on LOT Polish Airlines from Singapore to Warsaw. At the very beginning I visited Jewel which in my opinion should be in the airside for the transit passangers. When I finally decided to get to the airside it turned out that they couldn't scan my electronic boarding pass and I had to wait in an incredibly long queue, which was a huge inconvenience. The airport staff were really helpful though. They explained that we have to wait in the line, because they can’t scan our boarding pass, because they don’t have this airline in their system, which in my opinion is nothing but pathetic. If the airport serves an airline, it should be in their system. This airport is very overrated and 'likes to fly, but forgets how to walk' - it’s spectacular, but doesn’t offer basic airport services like scanning electronic boarding passes.
1 to 10 of 402 Reviews