I arrived from Rio GIG on board TAM at Guarulhos terminal 1 at 16.20 to connect to SAA, STD 18.40 at terminal 3. At passport control there were 6 counters open out of 21 for the range of departure gates assigned to our SAA flight and a number of other long haul flights with medium to large planes. This is probably the most busy time at Guarulhos. We and about 200 other pax for this SAA flight, as well as another 1500 pax for other long haul flights departing from the same range of gates queued for almost two hours at passport control and hence almost missed our flight which was no 'hot connex' at all. All those flights were delayed by 30 minutes or more because of that. Staff couldn't care less. Never ever had such a bad experience at any airport.
7/10

Arrival, terminal looks clean but aging. you can tell right away that this airport has seen better days. The smell of old airport lingers. It's also a bit dark. Signage are OK. Free wifi. Carousel are old fashioned and TV monitor are aging as well. Washrooms facility in the baggage claim. Clean but again old and tiny. Since thre's only 2 of us this time, we opted to take the Airporter. We paid about BRL42 (USD 10). GRU is the farthest airport to town and it will take about 40-1 hour depending on traffic and taxi will cost about BRL120-150 (USD 30-45). THe airporter stops on the major hotel in Sao Paulo and then along Paulista. We stayed at Renaissance and the stop is just outside the hotel so it's very very convenient. Departure, our flight was at 1020PM which is the busiest time at GRU airport as most flight to North America and some Europe departs at that time so the airport was quite busy. Hard to find the check in area for our flight as we did not find any monitor. GRU also utilizes the Mobile Apps Scan and Go so you can have your boarding pass on your phone and you just need to scan it. Check in was a breeze and then we head to the security area. The thing I hate the most in GRU airport is the electrical outlet. They do not have the International standard socket so you will need to buy an adapter/converter at the store so you can charge your phone. I find it also weird that very few airport staff speaks English. The terminal is serving the North America and other International flights and yet it was a struggle to order a simple coffee at Starbucks! Again same set up as in GIG, all departure gates has stanchions and signage for your boarding zone so people line up and not scattered around waiting to board. Good PA system. Once your inside the secured area by the gate, there are many options for food and drinks and the prices are reasonable and even cheaper except again for souvenirs shops. They are horrible. Shooter glass was selling for $15USD.
7/10

Flew CNF-GRU-JFK and DFW-GRU-CNF. Long transit times as I had two different reservations for the international and domestic flights and had to be on the safe side. It was my second time in international transit at GRU since T3 opened. The airport does feel less crowded than before. The walk from T1 to T3 is a long one, but in my experience the shuttles are often no faster, they just spare the walk. I noticed some inconsistencies in the signage arriving at T3 through the tunnel. The overal experience on departure to JFK was a good one, only real problem were the LONG lines for exit immigration control, but I suppose this is the Federal's Police fault, not the airport´s. The lounge used by AA is nothing special, but I understand they are in the process of adding their own Admiral's Club. Upon returning, no major hassles but the bags tagged Priority were the last ones to arrive. I`ve contacted the airport and they replied saying it´s the airline that´s responsible for baggage handling.
8/10 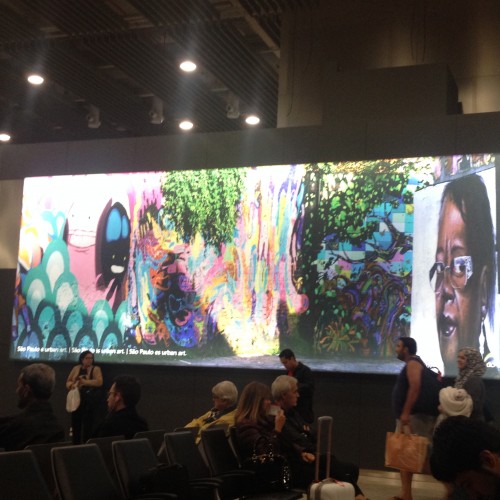 Terminal 3 of the Sao Paulo Guarulhos airport is a huge improvement to the prior international terminals 1 and 2. The check in area is huge with high ceilings and is very well lit with natural light. Security and immigration work fine. Once you pass security and immigration there is plenty of room restaurants and shops. Again the whole building has a lot of natural light and space. The airline lounges are comfortable and the way to the gates is well signalled. The improvement over the old facilities is so great that it is even difficult to describe it.
10/10

Departure experience just as good as my arrival experience. Flew GRU to SCL on TAM Business Class - checked in early. Absolutely no queues. Check in took no more than 3 minutes. Nobody at immigration either. Fast efficient transit to departures. Enjoyed the LANTAM Executive Lounge. Lounge is about 4-5 times larger than the previous one in Terminal 2. Everything spotless lovely showers reasonable selection of food and drinks. TV screens with English programs comfortable seating. My gate was the furthest from the lounge. Reasonable walk but had travelators to make it easier. Definitely more shops and food outlets than Terminal 2 - not sure about the pricing as I did not buy anything. Also more seating at the departure gates too. Incredible improvement - well done - finally!
8/10

The new terminal 3 has made a massive difference as this replaces the horrendous and out dated experience of arriving at Terminals 1 and 2. Better facilities lighter and more airy - just much better overall and shows what much-needed investment can deliver.
10/10

What a difference a year makes. Terminal 3 in Guarulhos has transported the main International terminal from the 1950's to the current era. Fantastic improvement from 12 months ago. Upon arrival you are greeted by a wide arrival concourse with moving walkways rest rooms at regular intervals clear signage in both Portuguese and English high ceilings clean fresh look. Immigration took 4 minutes and most of that was talking to the immigration officer about the remarkable transformation. After that you are greeted by an unbelievably spacious luggage claim area. Bags still took a long time to arrive but this is normal for me. You also have a reduced immigration card to fill in. Certainly makes a difference after the long haul from Australia. Guarulhos Terminal 3 could be any modern airport in the world as compared to the run down shambles that used to greet you upon arrival. Absolutely no complaints at all. I believe Terminals 1 & 2 have seen little if any change.
na

Used Terminals 1 and 2 so did not get to experience the new Terminal 3. Airport at least apart from T3 is older - not the best facilities. Poor selection of eateries especially once you pass security. Connecting from an international to domestic flight you really need to find your own way to the transit counter (not easy to find). As with all Brazilian airports when connecting from domestic to international even if your bags are transferred you need to leave the security area and check-in with your international airline. Contrary to what one earlier review states there are lots of ATMs in the airport. Signs in English and attendants speaking English are not as common as they should be but they are definitely present. There is Wi-Fi it appears you need to register and pay for it. I didn't try. No problems in Immigration baggage pick-up or customs. The fact that the airline I used in T2 (Delta) is apparently not among those international airlines moving to T3 saddens me. I used T1 for Gol domestic flights. Certainly not remodelled but it seems less crowded than in the past perhaps because of the opening of T3.
na

This airport is easily the worst I've been to. The toilets are disgusting (if they work at all) there is no English signage anywhere neither does anybody speak any English for an international airport I feel they should make the effort. Not a single ATM anywhere so if you have a lay over make sure you have local cash because neither foreign exchange kiosks take cards and even if they did their commission is ludicrous. Wifi what wifi?
11 to 20 of 70 Reviews