What a shame Santorini airport was such a shambles. Despite arriving 3 hours before the flght time, didn't get though to the departure lounge until 5 minutes before being called to the actual gate. Santorini's weather was extremely hot and we queued outside the airport for half an hour only to find that we were in the wrong queue. Queued again to check in, with virtually no airport staff. Once checked in, then you have to queue to check in your hold luggage. Stood longer at that queue than the check in desk. The staff were obviously balancing which desk to man with so few staff. After that, we were told to join a 3rd queue, again outside the airport because of queue length, for security checks. Toilets dirty, food and drink choices not good and typically expensive. Frankly, it's the worst airport I've ever been to in 40 odd years of international travel. Such a shame as it's a beautiful island
1/10

Santorini is the worst airport I have ever seen. It brings a huge disgrace to such a beautiful island. AC not working, dirty and smelly toilets, crowded and people lying down on the stairs. I am sure they could change something about this place that is meant to be an "airport".
1/10

This is the fourth year of travel to Santorini which is a fantastic place to holiday. However, the airport to put it bluntly is awful and going downhill year by year. The facilities are poor and the place is dirty. On leaving this year, once our luggage was checked in, we made our way through into the departure area and then upstairs instead of going to the tavernas up the road which is the usual process at this airport due to its lack of size. I could not face staying in the heat with few toilet facilities at the tavernas and knew that there were toilet facilities upstairs and air con. This was wrong - all the toilets upstairs were closed off. There were 2 female toilets downstairs which were in a disgusting state. There were no male facilities. The only other toilet facilities were after passport control just before boarding the flight. I would visit Santorini again however have decided against it at this point due to the condition of this airport. I don't think I can face it. On a plus, the staff at the food counter were pleasant and worked hard in difficult circumstances. All other staff were polite and were also working under pressure. The airport building however is not fit for purpose
1/10

"staff seemed to ignore the situation"

Utterly disgraceful situation at Santorini (Thira) airport last night. Flight arrivals delayed by mild cross winds meant that hundreds of departing travellers from 7 or 8 flights were crammed into tiny waiting area for several hours. Before passing through security we received no warning of the delay and the lack of facilities (or breathing space) ahead. The crush was so dense that when flights restarted people struggled to reach passport control. Very lucky there were no major health problems such as fainting or panic attacks and no fights breaking out despite the chaos. Staff all seemed to ignore the situation at best - or even to be as obstructive as possible. A disgrace to Greece and to all airlines using this wretched excuse for an airport. 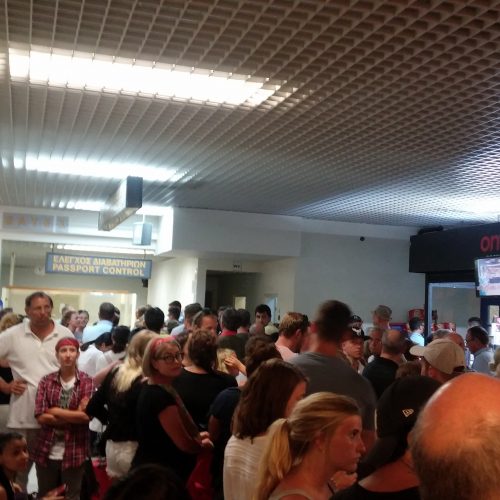 Arrival at Santorini Airport was ok as we had only hand luggage and were out in 2 minutes. However on departure when we entered filth and grime everywhere. Chairs, walls, doors all super dirty with empty cans and bottles everywhere. Looked like it had not been cleaned for years. Toilets disgusting. No doubt the worst airport I have ever been. Santorini is a wonderful place and does not deserve such a disgusting airport.
1/10

Santorini is the most abysmal, unreal airport experience I have ever had. I will never use it again and advise anyone to get there and back via Athens. Agree with all previous reviews. Queues outside in hot sun for hours for absolutely no good reason. No staff member cares or is available to help. Every flight left there late with major problems for anyone connecting to an international flight.
1/10

"queue for hours outside"

This wonderful island is stunningly beautiful. It has so much luxury accommodation that must generate enormous amounts of income from tourism. The local people are so hospitable and genuine., how then is the airport so shocking and ran by people who are totally ignorant. Be prepared to queue for hours outside in intense heat with no information when your flight is delayed.
1/10

"a disgrace to a beautiful island"

Arrived at Santorini Airport to find the queue for security out the door and around the side of the airport. Took almost 2 hours to get in the door only to find 1 security gate open. A group of older women who were in front of us proceeded to skip half the queue. I alerted a female staff member who informed me "it is not her problem" and to "ignore them". To make matters worse, my flight was to leave at 11:15pm and at 11:05pm I was still in the queue with about 50 people ahead. A male staff member seemed to be the only person with a bit of sense. He organised the insane queue, and gathered all passengers all in a pleasent manner. Overall, I have never experienced worse treatment in all of my travels. Such a disgrace to a beautiful island.
1/10

Santorini airport is chaotic. Our arrival and the bus transfer from the plane was ok, but the number of toilets in the baggage area was not. Only 2 for women - no hand soap, no paper towels nor drying devices available. Leaving two weeks later we arrived 2 hours prior to departure. In other airports this should leave adequate time for relaxing / shopping before boarding. But in the end there was absolutely no time for such extravagances. We queued outside the building in the cold, strong evening wind to go inside in small groups to have our luggage weighed and registered. 2 desks were open for this procedure, our travel reps collected the passports handing them to the persons at the desk. Then each passenger had to carry the checked-in luggage to another belt, supervised by 1 man, where the luggage was scanned. To queue for the security check we had to go outside the building again. This meant we had to cross through the queue of new passengers waiting to go in and having their luggage weighed etc. We queued again in the cold wind for security check. As we were waiting in the queue for security check, we noticed a board above one of the gates announcing our plane was boarding. We hurried naturally through the massive crowd after security check to get to the gate. Make sure you are ready for 2 hours of chaos before you book any holidays in the islands of wonderful Santorini.
1/10

"the most sub-standard airport"

It's ironic that Santorini, a beacon of opulence and luxury, has the most sub-standard airport I've ever been to. The staff were rude, facilities disgusting (the toilets were worse than a campsite and stunk out the airport), and organisation bad even for greek standards. We were forced to wait in line for security (which locals just jumped over and walked through), for 40 minutes because the airport was 'full' - they had however failed to open any of the waiting areas. What transpired was a large group of people crammed into a tiny area, with the smell of sewerage lingering through. Not a great way to end your trip.
51 to 60 of 84 Reviews