Not Verified | If you are switching airlines, save yourself some time and not a this airport. You have to create an account it take 3 days for a member to verify your account before you can submit an affidavit of travel. It took so long I missed my other flights, I was stuck at an airport in Argentina because they required this before I was able to board. The country is so behind, why does it take 3 days to verify an account, like they say cheaper isn’t always better, the price looked good but it was not worth it. I had to pay for another airline. If your traveling international please find a connecting airline otherwise these South American countries require lots of information
1/10

✅ Trip Verified | Horrible and most inefficient experience on several different occasions. The longest lines for immigration, customs, and security I’ve experienced. Very bad/non-existent signage in airport. Staff cannot answer questions or they give wrong answers. The new terminals being built now are miles apart and no train transportation. Get ready to walk and walk. 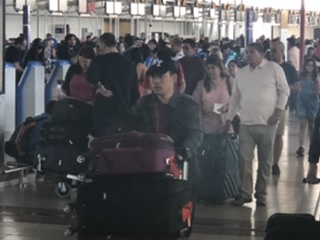 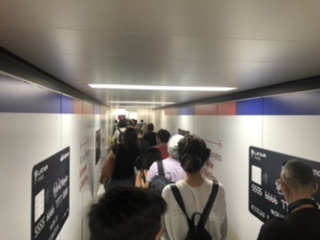 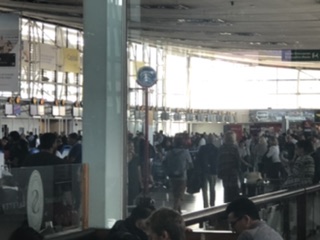 Not Verified | Heads up to anyone with a short connection through Santiago. On arrival, you will be required to walk (or use a few of the moving sidewalks) approximately a mile to the transit checkpoint, at which point you are spit out into the main terminal. If you are unlucky, as we were, you will then walk another mile back to the connecting gate which may have been next to the gate you arrived at. Extraordinarily inefficient, and a good way to miss your next flight. On the positive side, the bathrooms are extremely clean and the whitest brightest I've seen in an airport. The piped in music is a good idea too. The food court is fairly large but prices are quite high. No outlets for free charging at the seats.
1/10

✅ Trip Verified | Horrible airport, it is very uncomfortable, the security and immigration staff is very rude and unfriendly, it doesn't have good wifi connectivity, there are not enough restaurants.
9/10

✅ Trip Verified | I recently used SCL for transit (to Easter Island) and for arriving to and departing from Santiago. Hassle free experience. Both international and domestic terminals are in one structure, at two ends. The terminal has lots of eating places, clean bathrooms, and shops. Lots of souvenir buying opportunities. ATM machines allowed me to use my US bank issued ATM card to withdraw Chilean pesos - a 5 peso fee was charged. Good signage in English and Spanish and airport staff are very helpful. Customs and immigration were smooth. Security check was a bit too thorough. When exiting one is confronted by a sea of men touting taxi services. I used Uber to secure a ride into town. A modern Holiday Inn is located just outside the terminal to which you can walk to.
2/10

"the airport was slow"

✅ Trip Verified | We had a layover in Santiago airport to get to Easter Island. Our flight landed at 6 am and the airport was slow. We had to get through immigration first and went to the window that appeared on the queuing screen. When we go to that window, that officer didn't even look at us or take our passport right away because he was too buy checking out his Facebook and clicking "like" on different pictures. He made us stand there and wait for almost 10 minutes like idiots while all the passengers were long gone! When he was finally done he basically threw our passport on the counter and never took his eyes off of his phone. He gave us a horrible impression and experience of the Chilean airport. Is checking social media even allowed when there are passengers in front of their window? If he was too busy looking at his social media, why did he send people to his counter? I really would like someone to address this problem.
1/10

"This place is pretty terrible"

❌ Not Verified | This place is pretty terrible. Flying international straight up sucks, the airlines are not helpful and often unavailable. We had a flight that came in early so we wanted to check in early to our next flight, no can do, the airline didn't show up for 4 hours. So we had to wait around and couldn't go through security. Once you get through security, expect to pay stupid amounts of money for basic things, like water, coffee, etc. Don't expect to be able to take those drinks onto the plane. The airlines won't allow you to carry them on. I look forward to never using this airport again. Domestic flights are slightly better. Everything will be in Spanish (obviously) so speak it or have a really good idea of what you're doing and where you need to be. Only good thing: security is pretty quick and reasonable. Most of the time you won't even have to take off your shoes.
3/10

"airport is very badly laid out"

✅ Trip Verified | I did both international and domestic arrivals and departures. International arrivals were ok - the airport is very badly laid out but has lots of signs in Spanish and English and immigration was fast. Luggage collection is crowded and the customs entry is confusing - they x-ray everything but pay very little attention to it. Airport taxis seemed honest and well-organised but expensive ($28,000 to Las Condes) but if you don't use the official booths, you will be accosted by hoards of aggressive taxi drivers at the exit. Departure is much worse. The check-in area is crowded and confusing, although staff were helpful and most of the time, check-in was fast. Emigration and security can be very slow (took me 50 minutes one time) but could also be fast. Consider arriving more than 2 hours ahead. After security, you go through the most crowded and labyrinthine duty free shop that I've ever seen (decent alcohol prices but terrible chocolate prices and the staff are terrible - allow a lot of time). There is not enough space airside and passengers like to queue up half an hour before boarding but there's nowhere for the queues to go, so they block corridors. Wifi was barely usable on every visit. This is a terrible airport in most respects but they could fix a lot of problems by expanding the terminal and hiring more staff.
1/10

"worst airport I have ever experienced"

✅ Trip Verified | This is the worst airport I have ever experienced. It took 2 hours 30 minutes from getting off the plane to exiting the terminal and I have travelled to over 50 countries and had over 20 flights to over 13 countries in the last year. It was 50 minutes though customs and 1 hour and 40 minutes through baggage claim.
1/10

✅ Verified Review | Horrible experience at Santiago, possibly the worst I have ever had. Already on the two legs to arrive here I was having a really bad time with LATAM being very disorganised and unhelpful. This was stunning enough in this day and age I have flown with them in the past and was no issues but this time the level of incompetence was mind blowing and very frustrating. Arriving at the airport it was very confusing there were a few hundred people in a massive queue for transit. there was no clear signage and every now and then someone would yell out from the counter something that those in the back of the queue couldn't hear. Eventually I worked out that the queue was to get a boarding pass for the next leg. On my previous two legs LATAM couldn't get it together to give me so I had to queue in the confusion for 2 hours while people were freaking out, missing planes, yelling, people were jumping the queue and others were yelling at them etc. There was only a couple of young staff who seemed frazzled and confused as the rest of us. Total chaos. Eventually getting through the tight security screening area which was overcrowded and the staff were pushy and rude with cleaners pushing their way through. I went up to the transit lounge to find the airport progressively overcrowded, eventually finding out that my next plane was over two hours late and lots of other planes late. The gates were way overcrowded at some areas was hard to even walk through to get to the next gate. The signs for the gates are confusing in themselves and with no staff around to ask advice I had to ask shop keepers. All LATAM staff were swamped by hoards of angry people, some raising their voices. When it seemed like it couldn't get worse, more planes of people arrived. Staff in the airport were generally unfriendly but if you pushed them hard enough they might give basic info then turn away. The food was awful, all the tables were full of trash and all the garbage bins overflowing. Most gates had standing room only. I eventually found a gate where I could find a relatively uncrowded spot to sit on the floor while bored and frustrated people stared at me. 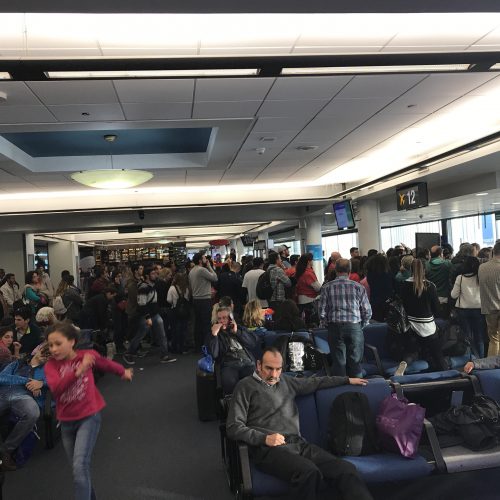 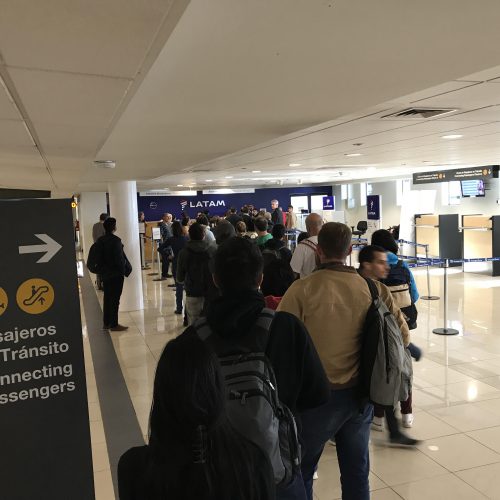 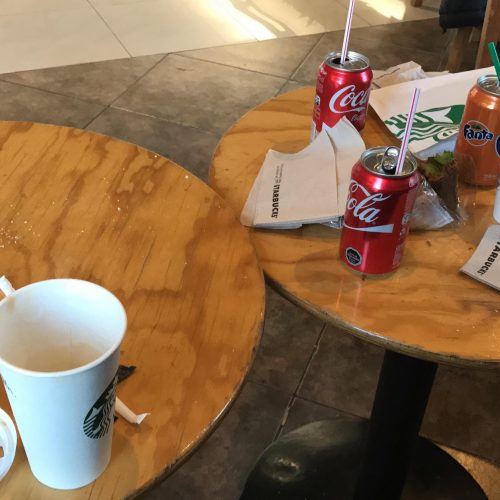