❎ Not Verified | Due to rain, the ground operations stopped working causing an hour delay on top of the already existing half an hour which was because of the total lack of organization. Staff only chat with each other and are imitating work.
8/10

✅ Trip Verified | A total surprise, having read reports about the airport, we were surprised. On arrival our flight was met by 3 coaches for the very short drive to the terminal building and then a very short well signed walk to Passport control. The Passport control was fully manned with all desks open, then though the door to the baggage reclaim and we found the bags were on the carousel as we walked up to it. After finding the sign for the Pisamover which is a few minutes walk from the terminal, we were in the city centre within 30 minutes of landing. Departure after our weekend stay in Pisa, we used the Pisamover from the city centre to the airport, and again the route was well signed and had staff who were happy to help with questions. We did notice on our arrival queues at Security and had planned to get there early. On arrival at security early the staff were friendly, and explained that we were early and more than welcome to go though security. We decided to do this rather than leave it to the last minute, and we were offered the free use of the fast track lane by the staff checking tickets. The staff at security were polite and friendly. Once passed though security there are a range of shops and cafes which are slighty expensive but good value for money. Again passport control was fully manned and all desks open. Boarding was slick and quick and take off was on time.
1/10

Not Verified | The passport control queue (on departure back to England) at this airport was absolutely appalling. We arrived with plenty of time and went straight to the departure gate as soon as it appeared on the screen. Upon arrival here, there was a long queue, with only 1 passport checkpoint open. The room and queuing system was small and people kept coming up the escalators/stairs, despite there not being any room. After about 45 minutes of queuing, people started to panic that they were going to miss their flights. A second and third checkpoint was opened for a little while (although these were shut again), but there was no apparent order as to who got checked first. This caused chaos and panic and people started pushing, shoving and shouting. I am normally fine in crowded situations, but even I started to panic at this point. I was so squashed in the crowd that I couldn't even move to find my phone to let my mum (who had got through a little earlier than me), know that I was stuck. People were starting to shout and get agitated. There was absolutely no recognition that another counter should have been open, and at points it felt as though the police were working even slower than usual. It was an absolute joke and I would recommend everyone to stay away from this airport, save the hassle and fly directly to Florence!
1/10

Not Verified | This airport is hell on earth ... it’s like a human experiment to see how many ways they can break you! Firstly the intense heat secondly the insane and terrible queuing system ensures that every part of your transit is torturous. Save the hassle fly to Florence and pay more.
2/10

Not Verified | Must be the worst airport in the world. Massively overcrowded, no seating, horrible delays. I am not generally an alarmist but as other users stated it is a massive safety risk. It is incredible that this airport is allowed to operate and the airlines using it are making themselves as liable by exposing its passengers to this risk.
2/10

Not Verified | I use Pisa airport 4 or 6 times a year. Leaving from the upstairs departure lounge gate number 19 20 21 22. 9 times out of ten there are departure delays. There is a serious overcrowding issue caused by these delays. If there was any kind of event, fire or security breach the resulting panic and crushing would be devastating. In the past I have written to Easyjet and the Italian airport authorities. There has been no attempt to control this situation. It’s a disgrace. There needs to be some sort of crowd control, make the area infront of the passport control into a holding area. 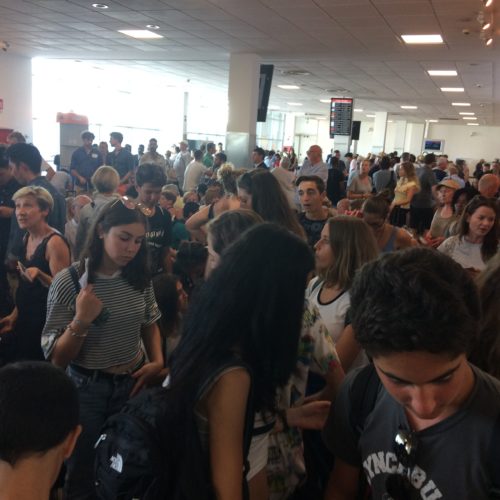 "this airport left us speechless"

✅ Trip Verified | Possibly the worst airport in the world, we are frequent travellers and have travelled across the globe but this airport left us speechless. It didn’t help our flight was delayed by over 3 hours with a 2 year old and a member requiring special assistance but the worst bit was the lack of seating in waiting areas and rude staff that were trying to take advantage of our already inadequate food compensation vouchers. It felt like a disaster evacuation zone. WiFi didn’t work, queues at check in and security horrendous. Avoid and pay more to fly out of another airport!
9/10

Not Verified | I was concerned by the poor reviews but my (our) experience was fine. Arrival was smooth, passport check brisk (in contrast to return at Stansted). Departure, the budget airline gates slightly out of the way, very short queue for Ryanair bag drop. Security slightly disorganised and no fast track, trays too small, but no big problem. Adequate shopping and cafes beyond security. Seating at gate (22) left many standing and then the usual Ryanair practice of being checked through gate only to stand for many minutes in sloping corridor.
1/10

❌ Not Verified | Avoid if at all possible. Reading some of the other reviews sounded familiar to our experience. Very disorganised, not enough information, very poor English spoken and some of them just rude. We too experienced the danger of queuing on the stairs. Had been called to go to boarding area but check in desks were unmanned. People were going up escalator with nowhere to go and I was sure an accident was going to happen as people were shouting move on please as they came off escalator! Eventually a member of staff came from somewhere and just turned it off. By this time people were queuing on escalator and stairs. Sometime later two security men sauntered in and opened the check in desk. When waiting to get on plane, fast track people were going through but in the end we were just in one big queue together again on stairs. Bearing in mind this was a hand luggage only flight this was madness and proved very difficult for some passengers with heavy bags. Other problems, not enough seats, poor food, overpriced. Just stay away if you can!
11 to 20 of 80 Reviews