Absolutely worst crowd management I've seen in more than 50 airports. Staff absolutely not trained to handle such numbers and really inefficient waiting time. More than an hour for security and no business class line. Bangkok Airport isn't the best but for sure it's doing better than that. 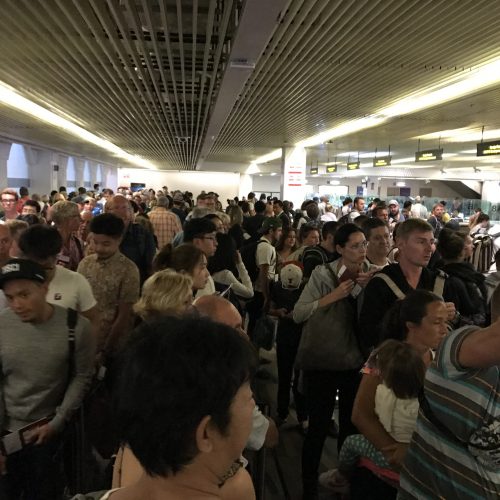 Phuket International is undertaking a so called upgrade and the end result is a catastrophe. The domestic airport arrival is complete chaos. Very difficult to get a cab. Touts and self declared cabs all over the place. Minibuses from hotels mixed with private limos. Extremely stressful and hostile environment. The departure is of the same level. This airport, unlike Bangkok, does a pre-scan in order to get inside the airport. This creates a long queue with under age security staff in charge of the whole process! Plan at least 30 minutes to clear this bottle neck. The checkin area dates back from the 1960s. Dirty and messy place. Once the check in is processed, there is very limited choice of food and shops upstairs.
3/10

"have been completely ignored by the three members of staff"

I am travelling from Phuket to London Heathrow via Bangkok today, flying business class. We checked in at the airport to find the business class lounge for Thai Airways is closed and a 'temporary' lounge set up. Basically, a cordonned off area of the large lounge. Service has been terrible. We had ordered a coffee, which was so tiny we drank it in three mouthfuls! My husband ordered a chicken sandwich which consisted of a strip of fake chicken and a pile of lettuce. Inedible. We have now been sitting here for an hour surrounded be empty coffee cups and dirty plates, and have been completely ignored by the three members of staff, who have spent the time chatting, eating their breakfast and walking past us. Terrible experience compared to Heathrow business class lounge, where the service was fantastic. Champagne, cocktails and delicious food all available to help yourself to. For once, UK has got it right!
8/10

"It was clear that there has been a rethink"

I reviewed the new Phuket airport in October 2016 and found it to be a disorganised mess with a near 2 hour queue to clear immigration for the 60 minute hop to KL. I flew from Phuket to London yesterday and there could not have been a greater contrast. The baggage scanning is now undertaken before you enter the terminal (a bit like the old terminal) and there was barely a queue for any of the security points at the entrance to the terminal. 5 minutes later I was inside and had the choice of two check-in desks at Bangkok Airways with no queues. Breezed into immigration and was directed to a counter almost immediately from where I cleared hand baggage security a couple of minutes later. In a decent airside lounge a couple of minutes later. From arrival to a cup of coffee took about 15 minutes. This was at 08.30 hrs on a Tuesday to catch the 10.20 flight up to Bangkok. It was clear that there has been a rethink and that the immigration counters are fully staffed and operational - or were at least yesterday - which was not the case last October. I arrived into Phuket as I normally do having cleared immigration in Bangkok so I cannot comment on the arrivals process other than to say it can be a long walk if you gate in the old terminal. But credit where it is due, the improved experience was light years from what it was in October and my scathing review as a consequence. Well done to all concerned and keep it up.
1/10

"no management and nobody cares"

Arrival processing at Phuket Airport took 3 hours. Departure took 3 hours and I just barely made my flight despite arriving 3 hours before departure. This airport has no management and nobody cares. We stood in line outside for an hour for the first security check, and then 2 hours to clear customs. There were people jumping the queues and no one to stop them. The situation got tense as many people were 45 to 60 minutes late to board their flights. I don't know whether I will ever go back to Phuket again. It's a shame to have a nice vacation spoiled by this level of airport management incompetence.
1/10

✅ Verified Review | Worst travel experience I had for many years at Phuket Airport. Crazy long queues on passport control both inbound and outbound - spent at least one hour in queue both arrival and departure. Additional time to enter the building itself as x-ray machines at the entrance with staff clearly not understanding what they do. Plan minimum 90 mins to pass all formalities on departure and get yourself mentally ready for 60 min queue on arrival.
3/10

"not really a tourist-friendly airport"

✅ Verified Review | Like many other reviewers of this airport, I was very disappointed at the time required to depart from this airport. As arrival was quickly accomplished, we never expected to experience such a long period that was required on departure. Luckily we happened to arrive a little early and so still could make our flight. The line to proceed through an initial baggage scan that took place outside the terminal entrance doors, extended beyond the covered portion of the airport. It took an hour to finally arrive at the X-ray machine. Then, with staff perhaps unable to properly understand the signals of the X-ray equipment, I was forced to spend an extra 15 minutes there while a security officer rummaged through my suitcase looking for a non-existent battery despite my repeatedly stating that I had no battery inside. After the officer removed many items, I had to go back and have a re-scan after which my luggage was declared OK. Of course my packing was a mess at this point and they let me put it back in by myself. I realize they have to be safe but as I had no problem with any other security equipment at other airports, I am placing the blame on experience with the equipment. Once inside, we got processed quite quickly by the airline to obtain our boarding pass (we were traveling business so less of a line-up), but then had to join a line for immigration that extended outside the immigration area, almost reaching the end wall of the terminal. When we reached inside the actual immigration area we noticed that, despite there being the option of 2 officers per kiosk, it appeared there was only one officer working per kiosk. So they did have the ability to speed things up if they wanted and staff were available. Hence a little over another hour was spent going through immigration and the inside security check. In summary, we spent well over 2 hours in some form of line just to get inside the terminal. This is a new terminal that is apparently the second busiest in Thailand yet is managed as if it were a small market airport. Not really a tourist-friendly airport.
1/10

"the worst new airport in the world"

No doubt the worst new airport in the world. Endless queuing to get in, at check in, to go through immigration, to go through security. Totally understaffed. We needed 3 hours from arrival to the gate and we had priority check in. Count at least 4 hours. Planes are systematically delayed because passengers are all blocked in the new wonderul luxury airport. What a mess!
8/10

"my personal experience is positive"

✅ Verified Review | After having read all negative reviews related to the new Phuket international Airport, I would like to break a lance in favor of this stylish terminal. My personal experience with this airport is positive. Nevertheless, my this experience refers to a business class trip with an in-advance booked transportation to and from the hotel; therefore, I can not judge, if for economy class travelers, other experiences can be made. I travel quite a lot and as consequence of this, I really do not bear queues. Arriving at the Phuket International terminal is comfortable: clear signs let the passenger quickly reach the immigration area, where in spite of the missing of a fast track lane for business class travelers, I just waited for about 15 min before absolving all formalities related to immigration. A quick walk to the baggage claim area, and my luggage was already there waiting for me. At this point I just had to walk few more steps to reach the taxi area, where I found a representative of the hotel waiting for me. The departing experience was even more comfortable, because I could profit of the fast track lane at immigration and boarding with zero waiting time. Boarding started on time. As nice frame rounding the service, I would like to mention the architecture of the airport that I like.
3/10

Very long queues. Both arrival and departure. Departure was critical. It was a Saturday morning, and two huge queues to go through security to enter the terminal. Same again after, for passport control. Ensure you come more than 2 hours before your flight, whatever the destination.
31 to 40 of 103 Reviews