✅ Trip Verified | Great experience at arrival. Very friendly staff welcoming all the way. Quick check of Thailand Pass with no waiting time, as smooth through immigration. The bags already on belt when we came to arrival hall.
5/10

Not Verified | I had a shock when I landed in Phuket Airport. Was looking so much forward for this trip, but started not the best way. Just for having the Italian passport, but living in London for 4 years and haven’t been back home in Italy for over 2 months, I’ve been so much discriminated and treated badly. I haven’t been given the chance either to explain, some policemen came shouting at me and so rude attitude. They didn’t wanted to let me talk or explain something, then after being taken to the medical center for check up like being told "we don’t care what you want to say or where you live, this is because you have Italian passport”. Our country never treat Asian citizens this way. The police men used bad words toward me, shouting and so much attitude, I haven’t seen never in my life. Security staff very rude, using loud tone while speaking. Still in shock. This is not the correct behavior.
1/10

"this is not the way to treat tourist"

Not Verified | Phuket Airport is purely money minded, no one is helpful infact they are very rude. They ask for money for direct immigration, one policemen said give me 200 baht I will give you a direct and quicker immigration. I will never suggest anyone to go from Phuket International Airport. One policemen used bad words towards us as we did not have sufficient money in our pocket, it was in our luggage. Later we converted INR into Thai Baht, this is not the way to treat tourists.
1/10

"The worst experience at this airport"

✅ Trip Verified | The worst experience at this airport, just because this is a truly money minded airport by unethical means due to following reasons: 1) Visa on arrival counter with just two staff members and three airlines scheduled to land around the same time. Huge queues, they need only cash proof of minimum level per person to issue visa. 2) After one hour of Visa on Arrival, huge immigration line as half the counters at peak time not working, some ground officials asked us for 100 Thai Baht/person for a quicker immigration with empty counters and having to save some time in very long queues at immigration counters a lot of people were opting for that. 3) The police staff were not bothered to attend or solve any query. 4) If someone is low of Thai baht, and he has a Forex card with currency, there in no ATM to withdraw, so you leave without any option, and have to bribe them to give visa. 5) There is a currency exchange counter which only accepts cash, So in a nut shell if you are short of Cash, you have to wait some hours and bribe them to give you VISA.
3/10

"a free-for-all of pushing and line jumping"

Not Verified | The immigration queues were over 2.5 hours long and complete chaos as the lines had overflowed the marked lanes due to the arrival of so many large planes (several from Russia) within the space of 15 minutes. This resulted in a free-for-all of pushing and line jumping as tired travellers, many with children showed their true colours. We joined the very end of the queue, resigned to losing time from our holiday but were immediately approached by a lady in a brown uniform who informed us we could pay 100Baht each and use the VIP lane. We immediately agreed and she escorted us there and we went through immigration in two minutes. Nobody asked us for the 100Baht either. It's clear there's a major problem at the airport which is over capacity at times - our plane had to wait 20 minutes for a stand to be available even though we arrived on time. However the Phuket Immigration Office was reported in the Phuket News website on Feb 13 as denying there were any problems. Quoting them to be "impossible" as all 38 counters were open. That was not the case when we landed. The 100Baht charge is unofficial and a backhander as we subsequently learned. There is an official VIP service who meet you at the door of the plane and escort you through immigration but it's 1200Baht each and has to be pre-booked.
1/10

Not Verified | The queues to the passport control were ridiculously long. It took 1.5 h to get the through the control. At the security check they took my power bank because it was dangerous (apparently), however, my wife's power bank was ok and we had exactly the same one. I've had that power bank for about 30 travels (4 of them in Thailand) and this was the first time that there was a problem. The staff couldn't explain why I couldn't have the power bank onboard and just laugh about it. By far one of the worst airport regarding personal I've been on.
2/10

Not Verified | The entire experience was stressful, as staff were very unhelpful and unclear on direction. Staff were very rude and we found ourselves going in circles because we could not find one staff member in the entire airport to help us. Our flight was from Phuket to Bangkok, which should have been a simple flight. We were very disappointed with this airport's departure organization. Also, I highly recommend that you do not go to "Daddy's Box" cafe inside of this airport. There were two girls working in the cafe who had terrible service and not the slightest ounce of customer service. The cafe has misleading signs advertising what their prices and offers were. I ordered a panini, the lady automatically put cheese on the panini, and then charged me because cheese is extra, however it did not say on their advertised poster menu that cheese was extra, she also did not give me the option to not have the cheese! They also advertised free water with anything on the menu. When I asked for the water, they said you have to purchase fries for the water. What a joke! Very misleading menus and signs posted outside the cafe, scams you for what you really get. Not even that tasty of food. Very very displeased with our whole experience at this aiport. I am used to rushed and/or rude airport staff, but this was by far the worst traveling experience.
3/10

Not Verified | What a circus. Poor and confusing signage from the moment you get off the plane and into the terminal. Good luck finding maps and directions to international departures. My 2 small children and I waited with our luggage for near 10 minutes for what appears to be the only lift to departures only to be pushed aside by 5 airport staff (who turned up after we did) who could have easily taken the escalator or stairs. 3 points awarded for functional and clean toilets, the food choice in the international terminal, and the free WiFi that has allowed me to share my story of this place. 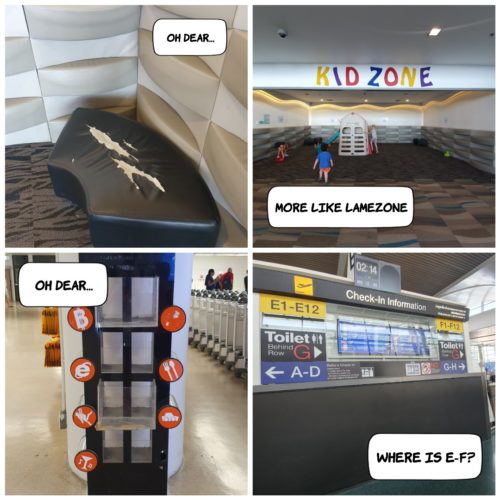 "the worst and most ridiculous we have ever had"

Not Verified | Our experience at Phuket International airport was by far the worst and most ridiculous we have ever had having been to more than 50 airports! It started with placing a national flight to Bangkok on the International Terminal, seemingly oblivious to the fact that Bangkok is the capital of Thailand. After initial confusion, we made it to the check-in where we found a queue of approximately 40 metres. After an acceptable waiting time at the security check, we tried to make our way to the gate - at least we thought so. The airport was seemingly not capable of implementing a normal, embarrassingly simple gate-system but forced hundreds of people into one (!) exit to dozens of planes. My mom almost fainted after being forced to stand with hundreds of other people in the queue for more than an hour. Even the most frugal, least organised and oldest military airport in Myanmar or India offered a far better experience than Phuket International Airport.
4/10

✅ Trip Verified | Not too many direct flights to this airport from other countries so presumably fairly common to travel via Bangkok to and from the airport. Firstly however, when arriving, we arrived via domestic from Bangkok but needed to walk through the airport to international to retrieve our bags - despite there being our flight number on a baggage collection area in domestic. The only way we found out was a man walking around calling out various cities of origin. He had a clipboard with our names on it then directed us to the other terminal. As a result, our pre-booked taxi was at the wrong terminal and we had to walk back to domestic to find them, just happened to cross paths with them as they came get to international terminal to find us. Secondly, when leaving, we were heading to Bangkok first, so one would assume we would leave via domestic and then international from Bangkok, but were instead told to walk to international to leave from there. Also on departure, we needed to clear immigration in Phuket, but had misplaced a departure card. Most airports provide a table with spare departure cards and pens so that they can be filled in there within the immigration area. But a staff member told us to go all the way back to where we checked in to get one instead. When I said that was crazy they didn’t have the those cards available in that area, the staff member wanted to argue with me about it. So we needed to ask a closed counter for a card then another counter for a pen before we could go back to the immigration area. Security check from there was also quite rude when directing to queues. Queue lengths were ok on this particular occasion. And facilities are reasonably clean.
1 to 10 of 103 Reviews