"I have seen no cleaning staff"

Not Verified | The terminal B bathrooms are dirty. The carpets and chairs in terminal B are dirty. I have seen no cleaning staff and have been here more than an hour. 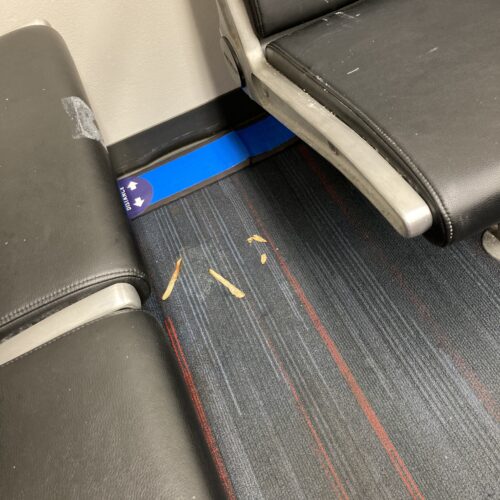 "This airport is so disgusting!"

✅ Trip Verified | This airport is so disgusting! It's filthy dirty. The ladies room by our arrival gate in Terminal E had toilet paper on the floor coming into and out of which was viewable from the concourse. Trash littered the gate areas and terminal walkways. The inside of the entire airport needs a complete makeover. The City of Philadelphia needs to spend some serious money and get this airport up to standards! This is definitely another embarrassment to the City of Philadelphia, in addition to their increasing murder rate!
1/10

"The worst, rudest airport I have ever been to"

Not Verified | The worst, rudest airport I have ever been to. TSA said my ticket was invalid then said it was the machine when someone else verified it was valid. Then while everyone else passed through, I was asked 3 times "are your pockets empty", I had my hat and belt buckle searched and that was the good part. We see an earlier flight so we get put on standby. If we get on cool, if not cool. The employees were clueless and the process was in complete disarray. "Those without a seat assigned board on 7". Hey we're on standby without a seat assignment. "You need you wait over there" ok sorry mam. "Final call! If you're boarding flight x you need to board now" hey mam were on standby. "Wait over there until called". I've been through and lived in Chicago/O'hare, Paterson/Newark airport and a few others and by far Philadelphia employees are mostly rude and clueless. I suggest using Newark or Trenton unless you want to be ripped off and treated poorly.
1/10

"I have never seen such a dirty airport"

Not Verified | I’ve traveled quite a bit and been to many airports. I must say, I have never seen such a dirty airport. The women's bathrooms were disgusting, the smell was intolerable. The carpet in airport was dirty as well as the floors. I’m really hoping someone reads this review and hires a cleaning crew in order to keep travelers safe. During these times of covid safety, cleanliness should be a top priority.
1/10

"it increasingly gets worse"

✅ Trip Verified | I’m shocked. I’ve been flying out of Philadelphia airport for 3 years now about 3-4 times a year and it increasingly gets worse. Walking out of Terminal C to baggage claim is now home to homeless people. I’m sad they can’t get warmth outside but to be in the airport is not okay. All the bathrooms in and out of the airport are disgusting. It’s like they only clean once a day for thousands of travelers. Not to mention the lack of customer service - it’s time to start teaching hospitality! And be careful with your luggage at baggage claim. They never have the right track marked with your arriving flight. With homeless around, I’m sorry to say your bags could be stolen when you’re waiting around track F for 45 minutes to then be notified on the loud speaker your bags were at track B the entire time. Get some help Philly.
1/10

"Shame on the city of Philadelphia"

"update the terminals so we can stay connected"

Not Verified | Very frustrating that 1/2 of the seating have power connections and only 1/2 of those are plugged in or even work! No power towers either! Welcome to the 21st century, update the terminals so we can stay connected or continue to work while we wait for our next flight.
10/10

"the people at this airport helped me out"

Not Verified | I have to say the people at this airport helped me out on my last travel. When I was recently here it was still pretty warm out so I was wearing my vans flip flops when I was traveling and my regular shoes were already in checked luggage. Anyway when I went to take off my flip flops in the security line I accidentally ripped the top part holding the right flip together. That meant the only way I could have walk was to walk barefoot with my right foot and carry the flip flop. Right when I was about to do that walking away from security after I got though they said they didn’t want me to have to walk through barefoot so they called someone to push me to where my flight was in a wheelchair so instead of my foot touching the ground it was on the footrest of the wheelchair.
1/10

"Horrible in every way"

✅ Trip Verified | Horrible in every way. Only 3 officers working with 300 people waiting, unbelievable bad organizational skills there, we missed our connection flight , waited 1 hour to get thru the officer window for a transit flight. They had 27 windows and all empty but those 3 officers handling 300 people at the same time. Just hire more, make them work, we pay for their salary. The information desk was super rude and mean and not helpful. Super mean. The worst airport ever, shame.
1/10

"Not a pleasant airport experience"

Not Verified | I'm really disappointed in the lack of assistance the staff of Adelaide Airport offered to me - as well as the staff of Virgin Airlines. I foolishly left a rolled up piece of native Australian Artwork on a seat outside of Gate 16 - A beautiful souvenir that I bought in Darwin and one that I was really excited to hang in my home as a memory of my trip. I was a bit flustered while getting to the gate - as many are in airports, and as a consequence I left my souvenir on the seat. I realised this on the flight and when I landed in Melbourne, I first asked The Virgin Airlines staff to help me - which they refused, telling me its not their issue and to contact Lost and found. I immediately contacted lost and found, only to be told that it will either be stolen or handed in. Even though I described to them exactly where it would be - after only an hour in transit - the women refused to send someone to check if it was there, claiming that is 'not part of their policy'. Really, how difficult is it to just check if somethings there or not? Its a darn shame that I left it there, but im also really saddened by the lack of support that Adelaide Airport and Virgin airline Staff offered me. Not a pleasant airport experience at Adelaide Airport.
1 to 10 of 205 Reviews