"experienced a problem getting to the trains"

✅ Verified Review | New arrival hall at Oslo Airport is spacious and airy and is fine except for one thing. I experienced a problem getting to the trains. I am obliged to travel further by NSB and have to purchase a ticket using a machine. On arrival at Oslo Airport I followed the signs to the trains where I encountered 4 very long queues to the 4 visible ticket machines. After a while a lady informed the travelers waiting in the queues that there were more machines behind the statue. Indeed, hidden away round a corner, out of sight and unindicated, were several more, with no queue. It would be very helpful indeed if these machines were indicated by signs so that unsuspecting travelers could find them. (I could have missed my train connection had I not need informed).
1/10

"would have expected a better passport control"

✅ Verified Review | I expected better from what is supposed to be a well-run country. We are a family of 4. My elderly parents and I British and my wife Indonesian. We flew Gatwick - Tromso, transiting through Oslo. On arrival at Oslo passport control, I was surprised that for a big airport there were only 4 passport counters. 1 for European & Norway, 1 automated and 2 for non-European passports, the queues were long and chaotic. I sent my parents through the European counter while I joined the international line with my Indonesian wife. Norwegian Air Shuttle had allowed us just over an hour to transit. The European line moved relatively quickly but ours was very slow. Then it stopped moving altogether. Meanwhile the European counter had few people in line and the officer at the counter in charge of automated clearances often had nothing to do. The passport assistance staff in yellow shirts were advising people, time to my Tromso flight was running out I became concerned about the time so called one of them for help. The first one heard my concern but just walked away, 10 minutes later it was already boarding time so I called another who said I just had to wait. Another 10 minutes and I pleaded for help as I knew my parents would be worried and would not want to join the Tromso flight without us. This person allowed us into the European line but it was another 10 minutes before we reached the front. When we finally cleared Oslo Immigration 20 minutes after the boarding time for our next flight, the departure information showed the gate for that flight was closing. I told my wife to hurry, she has arthritis and it turned out the Domestic Terminal A was some way off, no moving walkways or anything we could use to hurry. I raced ahead of my struggling wife to try and stop the flight departing. When I did get there 5 minutes after the departure time the gate was closed but the aircraft still connected to the bridge. I shouted at an official to stop the plane, he waved at the pilot who got someone off to come and let us on. My wife caught up but she was in pain! We were on the flight with my parents but were very stressed, they had tried to hold up the flight for us and though they would have to fly without us! I would have expected a better passport control from a country like Norway. My elderly parents and wife should not have had to go though that.
1/10

❎ Unverified | The worst airport experience I have ever had. I am a well travelled woman and Oslo was absolutely terrible. Passport control was shambolic. Staff abysmal. Really very dissapointed and nearly missed my flight. I will never fly from this airport again.
9/10

✅ Verified Review | With the addition of the new terminal, check-in counters and layout have greatly improved. Fast track is a nice option for the Business or Gold Star traveler. Duty free is roomy and has a good selection of merchandise. Local transportation is well connected with bus and train services.
1/10

✅ Verified Review | Desperate scenes of human misery and degradation at Oslo airport this morning. 35 minute queue for passport control at departures. Appalling heat, passengers climbing over each other to try and get to their flight in time. The elderly, children, business types, no one escapes the brutality of this hellish scene. Why? "It's summer" was as near as I got to an explanation from airport staff. Lots of places have summer, few are as utterly shambolic as this place.
2/10

❎ Unverified | A shocker. Waited on the tarmac because there was only one set of stairs to the passport area. Freezing cold. Totally inadequate. Travelled a lot. This is up there with the worst. One wonders how anyone would want to be a tourist here. 90 minutes and still not through customs.
1/10

"extremely inefficient, below standard set up"

❎ Unverified | The worst airport by far that I've encountered. Our SAS flight was 20 minutes delayed and we had a 30 min connection for our SAS flight to Heathrow. We were told that we had to line up in the atrocious queue of 200+ people for passport control. The information staff were nice enough but did not do anything to help with our query. We were told that we could only be helped by SAS service counter which was after the passport control. Our luggage is on the flight to Heathrow as I speak, we are still standing in this queue and it has been over 30 minutes. I will never travel via Oslo airport again and would not recommend to anyone else unless they wish to miss their flight and be stuck in queues for an extended period of time. Considering a lot of customers transfer flights, Oslo has an extremely inefficient, below standard set up and no information or announcements regarding transferring of flights. I have been to crowded airports before and had to wait in long queues but this is without a doubt the worst experience ever. Extremely disappointed, angry and unsafisfied and will never be travelling through here again. 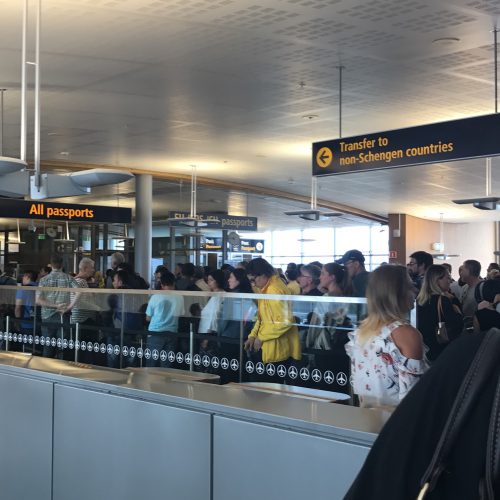 ✅ Verified Review | Slowest check in I have ever had to unfortunately experience in my life. The staff are really sweet, polite, and try hard to get everything moving (those in yellow jackets). However, there seems to be no system for the check in process. They keep having to redirect the line for window to window. How hard is it for check in? Only one booth was fast the rest was a disaster. Besides my rant, the airport is indeed clean, well equipped and nice. Food selection was diverse and shopping area was also very well designed. 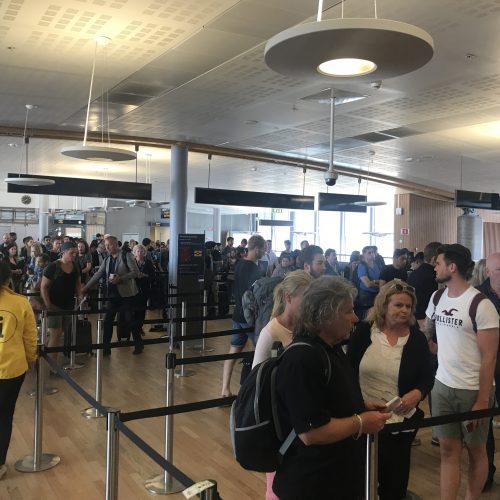 Excessive, chaotic delay at passport control in departure area of Oslo Airport. No information, stressful and uncomfortable. Families with children were finding it particularly difficult. Unclear what cause of this excessive delay was. Necessitated flight leaving an hour late. Very unsatisfactory for a major international airport. Obviously poor management and insufficient staff.
31 to 40 of 141 Reviews