✅ Trip Verified | International layover - international transit queue was slower than customs. Security check required but never left secure zone of the airport. Had a lady behind me, have her sealed duty free purchases taken. She purchased from her last location and was given no opportunity to access her checked bags. Based upon experience and other reviews. It's a nice airport, friendly staff, with absurd and antiquated policies blindly followed by staff. Do not recommend.
3/10

✅ Trip Verified | Staff are friendly, facilities clean, but was quite annoyed that when I deboarded and went through the transit area security checkpoint, 3 bottles of perfume I bought in the departure terminal of LAX immediately prior to the flight to Fiji were confiscated and destroyed because they were just over 100mls (even after I showed them the receipt proving I had just bought them in LAX). The most annoying part, apart from wasting my money and no longer having a gift to bring back to my daughter, was that immediately after you leave this transit lounge security checkpoint, you proceed straight into a shop that sells bottles of perfume that are over 100mls, meaning that you will need to take those bottles in your carry-on back for your next flight anyway, so what is the point of destroying my bottles? Not impressed. Airport security team needs to be sat down to explain how they justify such an absurd policy.
10/10

✅ Trip Verified | I found very good customer service by each and every worker at the airport whom we dealt with. Wifi facilities were excellent with no interruptions. Overall it passes the required tests 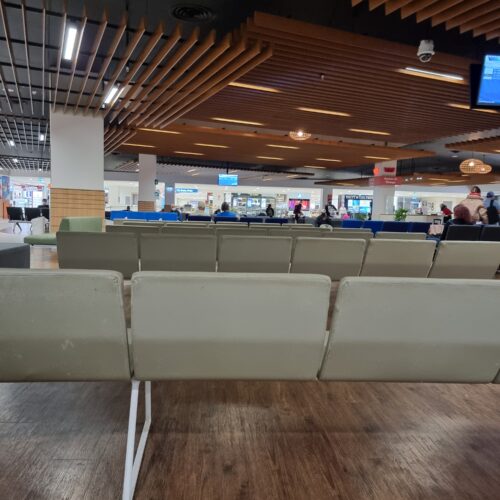 "Airport itself is fine"

✅ Trip Verified | Airport itself is fine. Simple. Easy to get around and not too large. There is a Tapoo shop and Burger King check-in side. Once through security there is a couple more eating places and 2 bigger duty free shops as well as a WHSmith. There is a very weird rule that you have to carry your Toiletries in a ziplock bag for check-in. This is OK except they want to charge you for one. It seems a very pointless rule for rules sake. But then after you've gone through the gate things get strange. Water and stuff you've bought in the departure lounge also has to be under the 100ml or in a duty free bag. They check all your bags and so I had a small bottle of unopened water just for the flight and had to throw it. The shops should tell you this or everything should be put in a duty-free bag. (tho that's a bit useless for water) It's a weird rule, and completely pointless since no other countries do it. It ruins all the rest of the experience if the airport. The staff also can't tell you why they are doing it.
8/10

"It was very slow"

✅ Trip Verified | Nadi airport was very busy when we arrived. We had to use steps to exit the plane and then walk a way. Three international flights landed so immigration was very crowded. Many people with children and elderly having to line up for some time. It was very slow. Some passengers must have had issues as some were with agents for a long time. Shame these are not dealt with separately. Bags were already there by the time we got through. Then we headed towards car rental to get our SIM card. F$49 card saw our whole trip through. (digicel). Departing was ok. Note there are only two options to eat landslde but far more airside. Also if you buy water airside they will bag it so it is ready as you board the flight as your bags get searched before boarding.
4/10

"airport doesn't have a lot of the "Bula!" spirit"

✅ Trip Verified | Nadi is a fine airport in some ways, and an airport in need of even more significant improvements in other ways. After flying in and out twice, I'm glad to see this small airport mostly modernized (at least the lobby and check-in areas), and looking very beautiful. This is a reflection of the success of Fiji's tourism industry, and the welcoming face that Fiji wants to portray for tourists. Check-in was not a challenge at all. Going through customs and immigration, leaving the airport briefly, then going back through security pre-gate were no problem. The signage to shuttle buses, taxis and public buses could still stand to be improved, but the airport was so small that I found where I was going. A bus pass can be bought for $5 (Fijian dollars), and a bus can be taken into central Nadi for less than ($2 USD). Connecting to your next flight should be no issue, as, like I said, going through customs is no problem (as long as you don't have anything significant to declare). Now, there are some cons. First of all, there's only one gift shop thingy I can remember post-security, and their prices are as high or higher on some products than you'd pay in the USA, Australia, or New Zealand. They have a monopoly! Second, staff in said gift shop don't seem to care if you fall over dead, as long as they get their money, as that's obvious in their attitudes. Third, security personnel have this stupid policy where they check carry-on bags AT the gate as planes are being boarded, without warning. They don't want any "unauthorized" liquids to be brought on, which means that even your carry-on-friendly toiletries better be in Ziploc bags (thankfully, mine were), and they'll confiscate your $4.00+ drink bottle that you bought in that unfriendly gift shop for "security reasons." Yeah, I echo the sentiments of some other travelers who have posted in saying, "That's stupid!" Fourth, their Wi-Fi ranges from pathetic to non-existing. In all, I'd far rather fly into and out of Nadi than a lot of major hub airports in the USA, but for an otherwise very welcoming Fijian people and culture, this airport doesn't have a lot of the "Bula!" spirit.
1/10

Not Verified | The custom security was ridiculous! Traps everywhere! Started with the custom security who was asking for the little zip bag for small items, where we only had a lipstick. The security was very “nice” to advise the bag cost 50 cents from the shop next to the checkpoint. When we went there to buy, we were told there was a minimum spend of $5. Walked around the shop, nothing is $5. Then we bought the cheapest item of $7.95, plus the 50 cents, plus 2.5% transaction fee, ended up spending almost $10. No other country’s security actually have this kind of requirement. Fiji is the place for tourism to be 'shaved' by the locals. Be careful!
3/10

"the worst airport I have travelled through"

Not Verified | Arriving into Nadi airport was no problem at all however departing was quite ridiculous with the rules they have in place and procedures. Before checking in, we were stopped by a security agent at her post, who wanted to see our passports and ask us some TSA questions which is fine! However she asked if I had an itinerary for the both of us which I had luckily printed but didn’t expect for it to be needed at that time as all you usually need to check in to any airport is a passport and she wasn’t even a check in agent. So that was a hassle and waste of time? Check in process was fine once we were done with the security agent. However going through security screening was annoying! They had pulled me aside for a small hand sanitiser I had in my bag and a roll on. I’ve travelled through so many airports where it is okay to have these items not in a bag as well as a lip balm. But these guys just seemed bored and wanted to make it a big deal. Luckily there was a little toiletry bag attached to my suitcase that they put it in but it was very unnecessary and wasted my time. I’ve also read that they won’t let you take duty free products through from another country even if it’s in those security bags provided in other countries? This is the only airport I know that does this and it is ridiculous! This is the worst airport I have travelled through.
4/10

❎ Not Verified | We were flying back to Sydney and spent time in the shops and food hall. We realised as soon as we had entered the “bula” warmth had disappeared and I felt like I was back home. The food was good but staff were indifferent and had no pleasantness. I then spent quite a bit of time walking around the shops and although we were approached constantly by perfume staff when I finally made purchases in the general shops there was no greeting or conversation at all. Where do they get their staff? The holiday was truly over then and I felt like a nuisance who was there just to get the purchase over with. These staff members looked bored and disinterested and talked amongst themselves-very disappointing end to the trip.
2/10

✅ Trip Verified | Don't pack a plastic knife in your cabin luggage. Nor a fork. I had some unbreakable ones that I've traveled with for years all over the world. They confiscated them. Legal in the US and in the other 50 countries I've visited. Not here. Terrible.
1 to 10 of 42 Reviews