✅ Trip Verified | Half of the airport is still closed - now that vacation starts it was quite full and social distancing was impossible. Munich Airport seems to save money where it can while charging fees whenever possible. Even a baggage trolley costs money - it was not even cleaned and had the filthy masks from previous passengers hanging on the handle.
1/10

"none or limited hygiene measures due to COVID-19"

Not Verified | Pretty much an average airport. Despite very low traffic, going through security was an ordeal as the process seemed very inefficient and disorganised. Staff simply do not speak any English. Most importantly, none or limited hygiene measures due to COVID-19. Cramped seats, dirty toilets and rather poor ambience with very little lighting. Compared to Zürich or Tokyo Haneda this airport is shambolic. T1 is barely a 1 star. "Terminal 1 has nothing to offer"

✅ Trip Verified | I had a transfer connection between two Star Alliance airlines and it was terrible. I arrived in Terminal 2 and the connecting flight was from Terminal 1. Actually there must have been a transfer, but it didn't work out. At the airport nobody knows about this transfer and there are no signs. The information on the airport's website is contradictory and there are no exact times. So I had to walk. I had to walk from one end of terminal 2 to the other end of terminal 1, more than 2500 meters. The transfer desk was closed. After I had to go through the security check in Terminal 1 and the passport control, the lounge was closed. Of course nobody told me that. So I had to go through the passport control again to get into the other lounge. More walking. And then again through the passport control before boarding. This is not a 5 star experience. The change is miserable. Terminal 1 has nothing to offer.
1/10

"no separate bus for business class"

✅ Trip Verified | My partner and I were connecting via Munich as part of our summer vacation in Turkey. We specifically booked business class for our transatlantic flights and the connecting flights from/to Munich in order to maintain social distancing during our trip. Our experience at Munich airport was dangerous: Munich airport heavily relies on buses to deplane. Unfortunately, there was no separate bus for business class and we had to be in the same full bus with the travellers that were sitting in economy class. The bus was packed and business class and economy class were mixed.
1/10

✅ Trip Verified | Munich airport is still using buses to transport passengers from the airplane to the terminal. Not sure if there were more buses but since everybody was getting on the first bus this was full. No coordination whatsoever. Waiting time for my luggage delivery was not acceptable.
3/10

"Eurowings check in was probably the slowest"

✅ Trip Verified | Eurowings check in was probably the slowest I have experienced in 30 years Of regular travel. Eurowings put too many people on the plane without tickets and lose their luggage. The plane could not take off until this excess luggage was removed and as it was raining they decided that the employees could not work and a full plane sat on the tarmac. "airport is slow and inefficient"

Not Verified | Even with only a dozen flights per day - and terminal 1 closed entirely - the airport is not capable to deliver the bags in a timely manner. The airport is slow and inefficient. 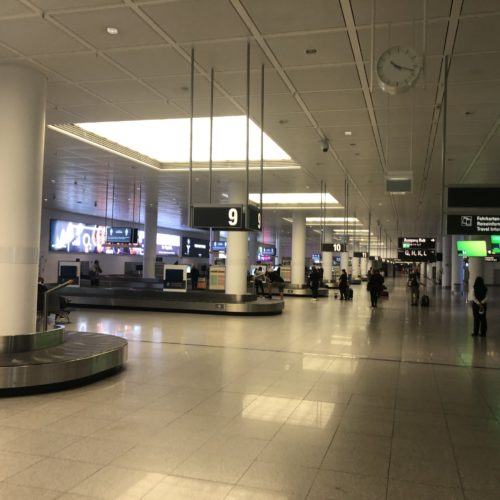 ✅ Trip Verified | Poorest Tax Refund Service! I believe most travellers don't know what to expect when it comes to Tax Refunding in airports. We were asking our way around the airport, though some answered politely, most others had the nastiest attitude ever. We were given confusing direction on Vat Refund in Terminal 2, and when we tried to get a refund at the office near H30, the officer's impolite attitude and unkind way of speaking made us felt disgusted. He kept cutting us off when we tried to explain or ask a question though we try to communicate with him in a calm manner. After a few sentences, he threatened us to leave otherwise he will call the cops. And then there was the end of the conversation. All within 2 mins, and there was not even a line behind us. Not only we felt frustrated and angry because of the unnecessary treatment, but we also lost our money back as well. The police are no help either.
1/10

"Nowhere can hand sanitizer be found"

✅ Trip Verified | This airport is incredible. While everybody else around the world and in Europe is afraid about the spread of the corona virus, Munich airport has undertaken no preventive measurements. Nowhere can hand sanitizer be found. Worst part: we had to take a bus to get from the plane to the terminal and vice versa. The bus was completely full and we felt like cattle. After the rainy weather, we were also wet.
1 to 10 of 263 Reviews