"Not enough staff for the demand of clients"

Not Verified | The security lines are poorly organized. Not enough staff for the demand of clients, only 4 officials were designated for us citizens, out of 24 cabins only 4 operating. Missed my connecting flight. No one cared, no connecting officials designated to connecting flights what a shame! Wonder if the governor knows where his money is assigned to. 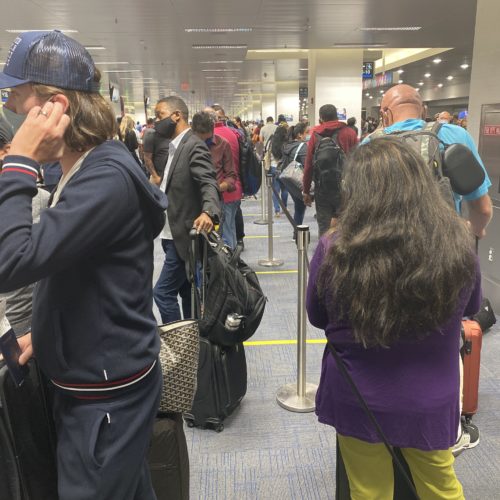 ✅ Trip Verified | Although airport is airy and modern, it’s plagued with the same issues at all US airports slow security lines and long walks from security to terminals, the biggest problem is from when you drop off your car to the security line is between 15-25 minutes depending on the gate, lots of walking, escalators, tram etc.
2/10

"MIA is just not acceptable"

✅ Trip Verified | Landed home to the USA after 10 hour flight in from Europe because of the COVID-19 pandemic. Yes, I admit the stress and concerns of social distancing is high but my airport observations despite the travel tensions are true. Kudos to the information booth attendant in terminal 1. However, brace yourselves for the lax unprofessional TSA team. Only once before, serving jury duty, had I ever felt like I was being processed for incarceration - like a bad movie scene. I flew into MIA once before 11 years ago and it was bad. It's worse. I only flew in to avoid JFK but MIA is just not acceptable.
1/10

Not Verified | Horrible experience. 11 hours flight, then 3 hours queuing to an unpolite policeman. Children and ald people in the same queue. Lost our driver, who was not able to wait more than 1 hour. Something which does not happen at least in Northern Europe, UK or Middle Europe.
1/10

Not Verified | Horrific experience at Miami airport. Massive lineups at customs and immigration. Then had to go through security to transit. Took 2 hours. Very poorly organised. If u ever feel like a cattle experience Miami where to come and experience it!
1/10

Not Verified | This airport has the worst international transfer set up I have ever experienced. After waiting in lines for about 40 minutes to get through customs, you have to literally exit the airport. There is no signage for connection flights, you just have to go the baggage claim. From baggage claim you have to collect your checked baggage. Again no signage. You then have to go completely back through security. Anything you bought at your last airport, duty free, any liquids will be thrown out. Again zero signage giving you a heads up that you might want to check anything you've bought while stuck at your last airports. So heads up, this airport is terrible. Avoid it if possible for international transfer. My opinion of JFK just went way up!
5/10

"the airport is always too cold"

Not Verified | Been here several times over the last 3 years and the airport is always too cold. So cold that I have heard many complaints and everyone is wearing heavy jackets. What is up with that? You have to go outside in February to warm up! Doesn’t make any sense and is miserable to be here.
3/10

✅ Trip Verified | After a 9 hour flight from the UK, we arrived in Miami. What a shambles! We queued with hundreds of other people for 2 hours to get through the Visa check. It seemed as if everybody went for their break at the same time! Good planning (not). The line just did not move. We were shouted into a queue to take our photo and fingerprints on a machine and then shouted at again to get into yet another queue with hundreds of people waiting to see a Customs Officer. We were told to present a copy of the photo we already had taken at the machine. He did exactly the same thing as we had already done and took yet another photo but, this time taking fingerprints of both hands. What an absolute joke this airport is. The rudeness of one of the officials astounded us. He must have been an ex serviceman or police officer in a former life. He was aggressive and treated everybody as if they were 10 years old. He shouted at anybody that did not get in the correct line. It is really not acceptable to have these sort of people working in this environment. This has put us off visiting Miami/Florida again. Look at the other reviews, it says it all!
2/10

"Not professional at all"

Not Verified | Arrived from Barcelona and cleared customs with sufficient time to get aboard an earlier departure flight to my next destination. The Departures sign board indicated the gate as D 9 (if memory serves), so we quickly followed the signs towards corridor D. But guess what, even though one hallway was clearly marked with a D (and an arrow) it had a barrier across the entrance and a big floor sign: No Admittance. So back we went to the main corridor, where we saw directional arrows for Gates D-E etc, so down that corridor we race, looking for an American Rebooking desk. None in sight, anywhere, despite this being a major American hub. Stopped at one gate that was staffed and asked where the rebooking desk was, and was told it was something like D-37 or D-3, and then the agent volunteered that one might be a little closer, so off in that direction we ran. When we finally got there, we were told that the doors had already been closed (never mind that it would have been about a 15 minute walk to get there anyway). So we resigned ourselves to an interminable wait down near D-1, where a bottled beer was "only" $10.50, not counting tax and a "suggested tip of $1.50." When it finally was near time for the departure for the later flight, suddenly there was a flurry of activity at the adjacent gates, when apparently four American flights were to depart within 15 minutes of one another from gates D-1 to D-5. And since there seemed to be only one PA, the assembled passengers became understandably restless when the gate attendant announced "we are now boarding Groups 1 and 2" without bothering to state the destination or flight number. Confusing? You bet. Especially when said announcement was drowned out by another PA telling "passenger XXX, please report to the gate." Final boarding began when five wheelchairs were rolled to the plane, followed very quickly by anyone who simply showed his/her boarding pass and walked aboard. There was only one American gate agent on duty, apparently all the others were still dealing with the adjacent flights. Not professional at all.
1/10

"They are useless, and do not even attempt to improve"

✅ Trip Verified | I had a connection in Miami last week, and not a lot of time before landing from Spain and needing to transfer, so I was in a rush to get to my connecting gate. I used mobile pass and went through and asked the person which queue to get into, and she said 35 or 36. I went to 36, and the officer at the desk said I was in the wrong line. I asked him which line was the correct one and pointed at the woman behind us (she was maybe 10 feet behind me) and said "she told me to go to this line" and he just waived randomly to the other 35 lines and said "back there". He did not even bother looking up from his cell phone. So, I went back to the woman who had told me originally that it was line 35 or 36, and she said, "oh, I meant 34 or 35." (We were standing right in front of lines 34, 35, and 36.) She seriously could not have been less concerned that she's giving out misinformation. The officer in line 36 also could not be bothered to simply say the queue right next to him was the correct one. Seriously. They are useless, and do not even attempt to improve. They should all be fired for their attitudes and giving out incorrect information. This is not the first time I've had a terrible experience flying through Miami and I avoid it whenever possible.
1 to 10 of 372 Reviews