"pulled the mask up, he scowled at me"

✅ Trip Verified | My fiancee and I flew in from Cape Town and had a 2-hour layover at this airport prior to taking our next flight to our first bush camp in Kanana. So we strolled outside to do some souvenir shopping and get some refreshments at the cafe just outside the airport. On the way there, I stopped at the smoker's hut and had a cigarette. Obviously I pulled my mask down in order to smoke. When I finished, I threw my cigarette butt away in the provided trash can, and adjusted a few items in my backpack .. about 10 seconds had passed b/w my throwing away my cigarette butt and that's when Maun airport police officer approached me. He rudely asked "Why are you not wearing your mask?" I replied, "I just finished a cigarette." He even more rudely said to me "And that is your defense?" I replied "Well, it is my reason." I pulled the mask up, he scowled at me. I expect this sort of behavior when I go to the post office, or to renew my driver's license, but I would imagine the city of Maun, the airport, and definitely the many bush camps in the region largely benefit from tourism that comes to the area and those tourists do have a choice. One disgruntled man's actions will harm an entire region and people, and that would be a shame. 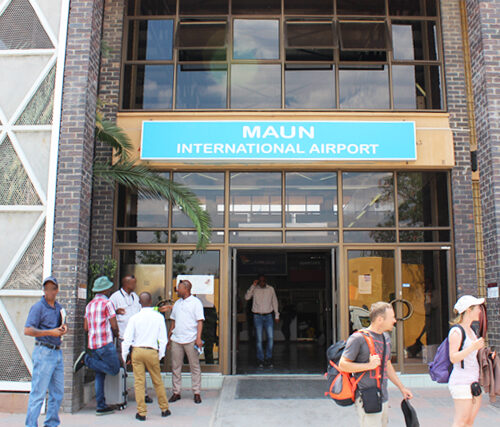 "dated and seriously needs some upgrading"

✅ Trip Verified | I arrived at Maun on a flight from Cape Town. Maun airport is a relatively simple and small airport with almost no conveniences and no air conditioning. We had to walk from the plane to the entrance of the airport, although the distance was short. Just before entering the door, we were stopped and asked where we were coming from and several passengers had to produce their Yellow Fever vaccination records. No one had given us immigration forms on the plane and thus we had to complete these in the small, hot area just before the immigration desks. At the time I was there, only one officer was processing passports, so there was some delay. However, the lady immigration officer was pleasant and processed me promptly. From there I went to the baggage claim area and while there used the restroom, it was not pleasant. I collected my baggage without much ado and simply walked past the customs inspector, who ignored me, and was then in the main terminal area. A few steps past that and I was at the desk of Mack Air, the airline I was to use to fly to my safari lodge. The Mack Air people processed me promptly and the next stop was a luggage scan before entering the pre-boarding holding area. The security folks used a scanner but also insisted on opening my small bag and having a look-see. My feeling is that the scanner is not really very good. The pre-boarding area is simply a non-airconditioned room, hot and without much in the way of creature comforts. Although Mack Air gave me a bottle of water, I could see no facilities for purchasing drinks or anything else. My impression is that Maun Airport, though an international airport, is dated and seriously needs some upgrading. At the time I arrived, another flight was arriving and it appeared that this was the time of day when almost everything happens at the airport. Still, it is stretched to capacity and seriously needs some upgrade as it handles most of the transiting traffic between international carriers and the smaller shuttle airlines (such as Mack Air) that move passengers to and from the various safari lodges in the Okavango Delta. Thus, whether one recommends Maun Airport or not, it is a necessity if one is going to the Delta and its only plus is the friendliness of its staff.
3/10

Both sets of ladies toilets that I used during our recently transit through Maun (early November 2009) were horrible. Several sinks were broken/hanging off the wall some toilet mechanisms would not flush taps were out of order and facilities for the disposal for feminine waste had clearly not been functional for years (although the toilets were kept as clean as their poor state of repair would allow). I know that Botswana is currently having a particularly hard time given the global downturn but maintenance of these facilities must have been neglected for a very long time to get into their current state. Botwana has unequivocally positioned itself at the high end of the tourist market: if so then it must be prepared to deliver service and facilities commensurate with this market niche. This applies not just to the camps but also to airports which are the gateway (and first introduction) to the country. Given the parlous state of the diamond market and the beleagured US economy (from which it apparently attracts the majority of its tourists) Botswana should be placing even greater emphasis on delivering quality facilities and service to attract visitors from the diminished pool of tourists who have the money to be able to afford to visit which is undoubtedly a costly travel destination. Otherwise the airport is fine for a small regional airport in the developing world and thankfully the air conditioning works well! The use of golf carts to transport passengers and luggage to and from the planes is also an excellent idea both in terms of passenger safety and comfort.
3/10

Travelled twice from/to Jo'burg. Very small airport used mainly and maybe only to reach Okawango Delta. A couple of flight per day to South Africa and Gaborone twice a week to Namibia. However it is usually quite busy because all small airplanes leaves from here to all airstrips in Okawango. Security control also for internal flights with these small planes!. One "gate" you walk to the airplane. There are no facilities inside only one toilet and no food and shops one check-in desk that open 2 hours before flight but the queue is reasonable. It is a safe airport quite clean but not the place where you'd like to spend more time than necessary! Nice shop and honest food just in front of the airport.