❎ Unverified | Marseille MP2 is a very poor airport. Waiting for a flight to Gatwick on 4 September, the gate was announced and we queued for passport control. Only one booth was manned and the officials were more interested in chatting to each other than checking passports so it took a good 15 minutes to get through the queue. When we got to the booth, we were told that the gate wasn't ready, even though it had been announced before. The staff gave no information, were very rude and unhelpful, and as they didn't make any announcements, the Gatwick passengers kept queuing and blocking passengers going to other destinations. First the staff told us to wait next to the booths but after 5 minutes there were too many people, the queue was chaos and nobody could move. There was still no information, no apologies for the delay, and the staff claimed they had no updates from the airline. This was ridiculous - a quick look at the easyJet app showed there was a 30 minute delay - why couldn't the staff look it up? In the end, the staff told us to go back to the waiting area, where we waited for 30 minutes before the gate was reannounced and we had to queue again. Marseille is a great city with an amazing coastline, vibrant streets and friendly people. The shambolic organisation and indifferent staff aren't worthy of it.
9/10

❎ Unverified | Good airport: I frequently use Marseille airport to join and to come from Paris CDG airport. Queuing time is optimised, airport is clean and all facilities can be found in public area and in international area. Air France check in is automatized in order to gain time and it works well.
4/10

✅ Verified Review | I rarely complain but grin and bear it. However this airport, in particular MP2, has a huge problem. We regularly use Marseille airport to travel to and from the UK. Arrival is fine, if cheap and cheerful. Departure from MP2 is an absolute nightmare. Huge queues for check in at easyJet and other airlines are usually snaking out of the doors. When you finally reach check-in, you have to lift your luggage on and off the scales, back onto the trolley, then take the luggage through to another conveyor belt, showing your passport and boarding pass again and therefore doubling check-in time. Then you have to go back outside through all the queues to get rid of that trolley. Passing through security is okay. Waiting around is very boring with little choice of facilities in the terminal. The real fun starts when your flight is finally called and you are allowed to queue for passport control, realising that there is no way one customs official can check 280 passports in the 20 minutes before your gate closes. Very strange management which leaves people vaulting over barriers to catch their flight. Ah yes. And if your flight should be delayed, you will have to stand at the departure gate. In the heat. For hours. Simply exhausting.
7/10

"arriving is a no frills experience"

✅ Verified Review | This is a review of Marseille Airport with specific reference to arrival and departure at the budget MP2 terminal. I will begin with arrivals as there is little to say. You walk directly off the plane and onto the track which is not everyone's favourite, but no disaster. As with the rest of this terminal, arriving is a no frills experience. Your passport is checked, baggage delivery is fairly simple and all connecting coaches to the city centre are directly outside. Onto departures. Flying with easyJet means that it is rarely advantageous to be too early. Bag drop is not typically opened until two hours before departure. If you find yourself a little too early, best best is to hang around the main terminals rather than MP2 as there are much more amenities on offer to kill the time. Once check in is opened you pass through reasonably briskly, though perhaps not breakneck speed. Staff are generally courteous, and if not perhaps just a little hurried as there isn't a lot of them. The departure lounge has a number of seats available, and wasn't too busy for our flight. There is a small duty free and shop, and the area is aur conditioned. The toilets are upstairs and there is further seating, which isn't really highlighted so it was deserted. Once called through to boarding there is a small wait to ready the plane. There is not a lot of seating in this area so it's a bit of a gamble as to whether you get to sit down, but it wasn't for much longer than twenty minutes.
3/10

"departing from Marseille is the worst"

✅ Verified Review | While I am half French and love Provence, departing from Marseille is the worst. Each year I travel to Provence and while the area is lovely, Marseille's airport needs to be seriously improved ASAP. While cosmetic issues (how many years does it take to plant trees and build steps out in the front?) are rampant, signage poor (hall what? terminal? lets get a better system people!), poor selection of shops (finally a Starbucks but perhaps some more options?), my main concern is security. Each time I depart, the process is appaling. No staff to guide and tame the wild animals, security staff who make rude hand gestures to signal you to pass through, who dont respect people's belongings, and dont even carefully monitor bags! Security equipment is out dated as well. I am posting this in hope that it will result in some significant improvements.
1/10

What a dump. I honestly asked if this was a temporary building. This is France's second city and they build this. The check in, you take your own bag once it has been tagged. There is no air conditioning. You have to zig zag through probably 200 metres to get to a tiny passport queue which then takes ages. The gates. They are meta lined pens that look like a prison. No toilets no water no vending machines. Sitting here now. Awful. 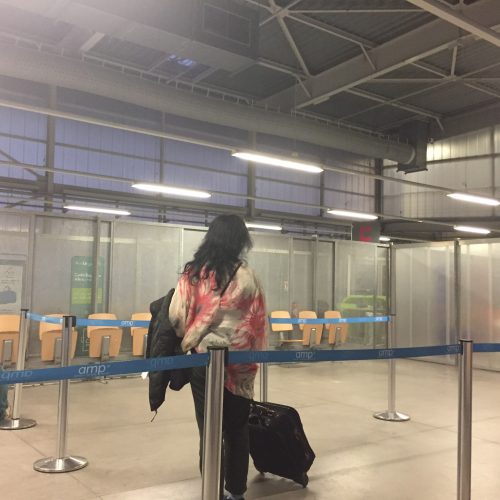 "the passport staff were appalling"

✅ Verified Review | Arrival in to Marseille was fine. Our arrival gate was a long walk away from passport and baggage area but I always expect this when flying with Ryanair - so no real surprise there. The horror came on departure day. After a lovely week on our first cruise, we arrived at the airport very early for our flight (over 5 hours early - due to there being no facilities at all at Marseille Port we decided to just jump in to a taxi straight after disembarking the ship) but it was just a terrible experience. I've been through a lot of airports on my travels and this was the worst. The 'desks' seem to open when they please with no notification anywhere and miserable staff. We queued up for 20 mins to drop our suitcase at the 'all flights' desk only to get there and be told to queue back up in half an hour as they weren't accepting bags for our flight yet. So we sat back down at the one single, very overpriced café and waited, then queued up for another 20 mins, only to find that all the lady did was put a tag on our bag. We then had to take it to another queue, wait another 20 mins and put it on to a conveyorbelt. Then came the next queue for security. Through security we decided to get a drink and a sandwich (poor choice and very expensive again for the quality - possibly made worse by our already bad moods). We then waited for information on our flight, which took an age. We had noticed the passport control but were told not to queue before our flight info showed as we wouldn't be allowed through and there was absolutely no facilities on the other side anyway. So we waited and waited. When our flight info did show we joined the queue - roughly half an hour before the 'gate close' time on our boarding passes, which had already concerned us - and this queue literally didn't move for about 35 minutes. The passport staff were appalling. The airport staff didn't care until the actual take off time of a flight and would then call people forward. Absolutely horrendous. We were so worried until a few people who had experienced this before talked to us and explained that the flight wouldn't take off as the whole plane was in this queue. They were right - our flight took off about an hour late. Both my partner and I have said we will avoid this airport in the future. It was such a bad ending to a wonderful holiday. If you can fly out of anywhere else, then do! Oh - a positive: the wifi was relatively fast and free.
7/10

"very clean and the queues are quick"

The airport is nice, very clean and the queues are quick. The bathrooms are good and it is easy to know where to go as there are many directions signs and the seating is good. When I arrived, I had a long distance to walk and our passports were checked at border control, even though we were coming from Lisbon.
1/10

"what a sad end to a wonderful week"

What a sad end to a wonderful week in Provence having to depart from this terrible airport. My wife, who has hip problems, had to stand for 20 minutes whilst two officials took their time in processing a queue of around 200 passengers. The solution to the un-acceptably long queues at the passport control is to have holding areas after passport control instead of leaving it to the point when passengers are boarding - can management not see this? The facilities in general are very poor. If we ever visit this part of France again it will certainly not be via this airport. Poor show Marseille.
1/10

✅ Verified Review | I have never seen such a poor terminal except Yangon's domestic terminal in Burma - that's how bad it is. Specifically: The building is like a warehouse with inadequate seating, poor design and cramped spaces for passengers. Metal barriers snake back and forth towards security and baggage drop. Signage is by hanging a metal sign on hooks instead of digital display. Toilets (only upstairs) were unclean and broken. No men's toilets had any seats. Disgusting! Snack points were expensive. I paid 10 euros for four tiny coffees in small paper cups. Waiting areas by the departure gate were too small and cramped. This airport is a disgrace to the region and a terrible introduction to Southern France. Avoid it if you can.
21 to 30 of 74 Reviews