✅ Trip Verified | I’m a frequent flyer with several airlines I live in Manchester and I have to agree that it is the worst airport in the world. Security today was 2hrs (priority fast track). Many stressed people missing flights! People crying and 1 minor scuffle. I made my flight my seconds but hundreds not so lucky! This is 2022 Manchester Airport simply not good enough! In fact a complete disgrace. 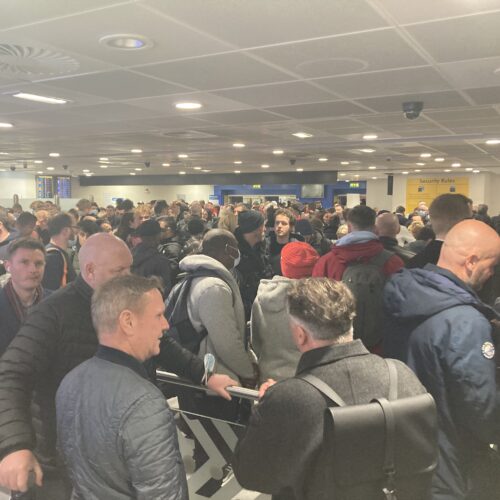 "shambles of a 3rd world airport"

Not Verified | This airport is shambolic. I have been in many, many airports in cities around the world and this is comfortably the worst one. Organization is dreadful, airport is well outdated and grubby. One of the worst aspects is queueing for security on departure where you are constantly being barked at by staff and immigration / passport on arrival. Its such a shame that people in NW England have little alternative than to use this shambles of a 3rd world airport.
1/10

✅ Trip Verified | Flight to Austria was scheduled to take off at 06.55 so arrived at the airport three hours before flight. Was shocked to see the queues at check-in/bag drop had filled the terminal area and were two hundred metres down the air bridge. It took two hours to get to the self-bag drop machines which refused to output the required tags for luggage, staff member printed all off separately and got us on our way. Wait, no we then had the joy of a one and a half hour queue for the ski drop scanner - apparently Manchester Airport has only one working scanner and this kept failing - at this point we were already thirty minutes late for take off and had yet to go through Security - another massive queue. Went straight down the fast track (without passes) and told the chap at the end that we were already late for the plane, after a detailed review of our boarding passes he let us through, even though we were then at the front of the queue, it still took a further twenty minutes to get through. Boarded the plane an hour after it should have taken off to find it waiting for the luggage to be loaded and other passengers to get through security. As an encore to this fiasco, we found that some of our luggage had been put on the wrong plane, honestly you could not make this stuff up. Manchester Airports response? "We had an unexpected number of passengers". I mean, it's not like the flights were scheduled and booked weeks ago is it. It was the same story on the return flight a week later. We took off three hours late from Innsbruck as the plane originally delayed in, yes you guessed it, Manchester! We landed two and a 1/2 hours late and it then took a further two and a half hours to offload the luggage from the plane. I feel sorry for the staff who have to deal with very frustrated passengers, this is not their fault. Management is non-existent they just keep booking the planes in even though they don't have enough trained check in staff, baggage handlers, security or border control staff. To add insult to injury you have to pay £5 to "drop off" passengers at this airport, even though you are stationary for circa sixty seconds, a total rip off.
1/10

"level of incompetence is unbelievable"

Not Verified | Appalling experience this morning - five hours after getting up at 4am on site, we were still on the tarmac. Queueing several hundred yards on the skywalk outside Terminal 2, no check in desks open as the baggage system had failed. When given our boarding cards, finally at the front of the queue, we had to go to a machine to weigh bags and print labels ourselves. Try figuring out how to attach an airline label when your brain is not working - another long queue to get the bags on the couple of functional conveyor belts apparently for the whole terminal. Security a complete nightmare, another very lengthy queue, the usual removal of boots as expected but even my little wooly cardigan had to go in a tray. My hand luggage was taken for inspection but nothing unacceptable was found, don’t know what that was about. Now half an hour to takeoff and no gate on the screen, but another flight with the same airline and destination was taking off at the same time from the C gates - adjacent to security, so we went there although no catering or duty free. Our gate was displayed twenty minutes before takeoff - a B gate - last call was promptly announced, so we had to sprint back to security and out the other side, through duty free etcetera, a further significant distance, to find seated passengers and yet more waiting for a bus to the plane. The plane took off nearly two hours late, as apparently our bags had been loaded on the flight which left from the C gate and vice versa. The level of incompetence attaching to these organisations is unbelievable. Anything but Manchester Airport
1/10

"it was disorganised and chaotic"

Not Verified | I have registered with the sole aim of posting a terrible review about this airport. I had to wait nearly an hour in a passport control queue on arrival, it was disorganised and chaotic. The staff were unhelpful and didn't appear to care. What really annoys me is looking at the web and finding that Manchester has been getting terrible reviews for years. Whoever owns it clearly doesn't seem to care what the public think as long as they are making money. Its not that hard to go and visit a decent airport and work out what you need to change is it? I will be trying my utmost to avoid this awful facility in the future.
4/10

"confusing signage upon arrival at Terminal 1"

✅ Trip Verified | My comment is specifically around the confusing signage upon arrival at Terminal 1 departures. I arrived at the T1 Meet and Greet car park and entered the building from there. There was no clear sign pointing where to go for Terminal 1 departures, just a lift with a very confusing list of options. I had no idea where to go which is very stressful for anyone who may have been held up and be in a rush to check in. I wondered if it was just me being stupid but as I hung around trying different lifts / different floors, the people I encountered along the way were also clueless as to where they had to go. Eventually I found my way but lost lots of time in the process. Why is there not a clear sign for Terminal 1 departures / check- in desks as you go into that entrance?! This would be so easy to fix - such an easy win to improve the customer experience and the airport's reputation.
1/10

"I had forgotten how unbelievably awful Manchester airport was"

Not Verified | Grounded for 2 years of Covid, I had forgotten how unbelievably awful Manchester airport was. Obviously determined to retain its spot amongst the worst airports in the world and despite it apparently building a new terminal it remains the shambolic stressful mess of old. Staff training appears to focus on shouting at passengers, who are herded up and down alleys like livestock. Security experience is third world, crowded and chaotic. Premises are dowdy, stuffy and grim. Has no one in charge ever gone to see a modern airport? If you can avoid this airport you will be doing yourself a favour!
2/10

"Worst airport I have traveled from in recent years"

✅ Trip Verified | Long security delays, had paid for fast track but equipment failures still caused long delay. Totally disorganised, walked forever to get to the gate. Lack of catering. Worst airport I have traveled from in recent years.
4/10

✅ Trip Verified | Departure of Manchester airport - very little mask wearing including by airport staff (probably less than 50%). Felt very unsafe. Arrival back into Manchester airport - suppose to arrive into Terminal 1. When we arrived, we were in a very small baggage collection area, baggage on floor getting in the way (this was not our luggage and I did hear this was from the day before). Took a long time to get baggage and then the security doors jammed. We were all stuck in this small area for about half an hour. No communication from any staff. Therefore running very late to get our transfer so when a tech man came and got the doors open, we were then released and found we were not in Terminal 1 and in fact we’re in the closed Terminal 3. Then had to go walk over to Terminal man1 arrivals to meet our transfer, another 10 minutes or so as have to leave one terminal walk outside and then get into the other terminal. None of this was communicated. Luckily our transfer did not charge us for the delay but this would no doubt cost them more money. Communication very poor. Dirty airport.
1/10

Not Verified | Worst airport I’ve been to for a long time. Hugely inefficient, stupid layout for check-in, no seats to rest or anything, just an empty 3rd world hall. Even more stupid is the security checks. Long lines, antique equipment and lots and lots of manual labour.
21 to 30 of 1297 Reviews