✅ Trip Verified | Complete chaos at security. First they didn't provide enough security staff, then they sell you a fast track ticket so you can bypass the queue which was caused by the airport management themselves by not employing enough screening officers. De facto sanctioning their own mismanagement.
2/10

"took forever to get through security"

✅ Trip Verified | What a shambles; it took forever to get through security because only 3 lines were open. Limited staff working in the airport. Our flight was delayed and we received no information- according to the airline, there was insufficient staff to allocate the plane a parking spot to embark; then not enough staff to process the embarkation of the flight. We took off 3 hour late and zero information was posted on the departure board. It’s not a surprise that travelling will increase, so get more staff.
1/10

"2.5hrs from landing to collecting our bags"

Not Verified | Landed at 3pm and sat on the runway till 3.55pm because there was no staff to bring the steps over. The staff on board the flight explained its every visit to MCR now. Got through passport control in a breeze then waited 1.5 hrs for the bags to reach the belt. Another flight had been waiting almost 4 hrs to collect their bags. No staff to ask questions to no staff to explain what's going on and strangely no staff at the declare/nothing to declare, all in all approximately 2.5hrs from landing to collecting our bags.
1/10

✅ Trip Verified | Worst airport I've ever experienced, and that's after 20+ years of travelling the world. Absolute disgrace. Queued for for nearly 2.5 hrs with (2) children to get airside through security. Ashamed to say at the end of it had to cut the Q and get bolshy to get the situation solved. Luckily our flight was held 60mins, we made it with minutes to spare. According to crew we left 30+ people behind in the terminal. Staff are clearly demoralised, not their fault. But this has to stop. It's like a 3rd world country. Probably 1500+ people crammed into a tiny space trying to use 2 available security carousels. It would be funny if it wasn't so embarrassing and costly. Never again via Manchester. The whole organisation should be ashamed of itself. 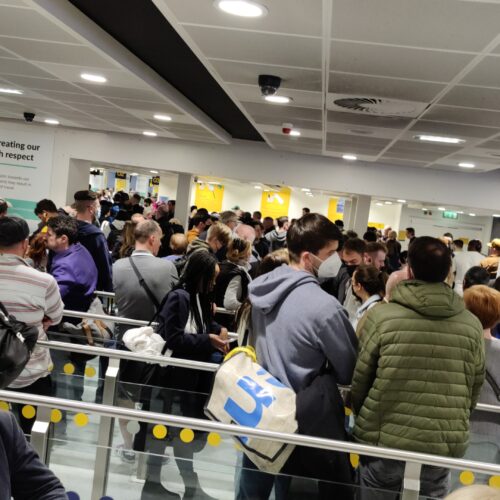 ✅ Trip Verified | You pay for fast track only to find everyone else pushes into that queue. Waiting time for security is horrendous. The only positive is the staff who were very pleasant but were under a lot of pressure. Some passengers were extremely rude to staff who don’t deserve it. Please employ more staff for a better customer experience. Manchester airport you are letting yourself down.
2/10

Not Verified | Absolutely appalling. Stood in queues for two hours to get airside. I travel all over the world for my work, predominantly Africa and Asia and I can genuinely say this is repeatedly the worst managed airport I have experienced.
1/10

Not Verified | Absolutely horrible airport now. Last time we used it it was so easy. Ignorant staff and no organisation whatsoever. Horrible security staff. He had no consideration for customers. People missed their flights. I understand there may be staffing issues due to recent events but there is no need for customers to be treated so appallingly.
1/10

"not be using this airport any more"

✅ Trip Verified | I will not be using this airport any more. Its complete chaos, not sure who the CEO is but he/she needs to go! Cues for check in where so long they were leading into the walkway from Terminal 1 to terminal 2. The travellators in the connection walk-way not working either on the way there or the way back. Cues for security were out the door! Even with fast track it took far to long. Unfortunately, each time I have used this airport I tell myself I will never use it again. but this time has to be the last straw. Read a release on my holiday saying they had more people arrive at the airport then expected. How is this possible, and then then a simple "sorry" for the delays with security. I personally don't think this is good enough and will show with my feet by using a different airport next time I fly. Dropping someone off costs £5, you have to pay for a trolley for your baggage! Don't fall into the trap of thinking it is convenient to where you live. Its badly run and not a good start to any journey, be it for business or pleasure.
1/10

Not Verified | This is the worst airport in the world. I am reasonably well travelled and have never experienced anything like it. The airport security staff all need to go on customer service skills training. They are rude and ignorant, barking orders. On my last ordeal I was reduced to tears. I have a pacemaker so was advised by my consultant to not go through the scanner. I showed my pacemaker card to a female security guard who let me through and then used a paddle to pat me down. Not satisfied with that she then frisked me. She then said she would need to swab me. Then in full view of everybody asked me to lift my jumper whilst she put the swab down the front of my jeans. I felt violated.
1/10

"finally reached the front after 90 minutes"

Not Verified | 5 March departing for Cape Verde with Tui we were in a line waiting for check that went back as far as T1 from T2. We finally reached the front after 90 minutes, to find there were no face to face check in staff only Self Check in with very few members if staff to help One staff member took our passports from us and ran off somewhere with them, we could not see him and it was very worrying. He had gone to put them through a scanner but did not tell us that was what he was doing. Security wasn`t as bad to get through, however they are shunting trays containing personal valuable possessions out of the security scanner and onto the conveyor belt at a rate of knots, and those possessions are exposed because they are not letting the people through the scanner fast enough to keep up with the baggage check - very worrying. 17 March return journey from Cape Verde with Tui, flight not showing on internet search. Even the Tui rep could not get any information. We were told that it would be delayed by at least two hours due to problems at Manchester Airport. Through social media we did find out that it was due to staff problems trying to deal with volume of passengers. When we finally boarded, Tui announced that Manchester Airport had been unable to load new stocks of foods and beverages, so there was extremely limited availability for a 6 hour flight. Would I use Manchester airport again ? Absolutely no.
11 to 20 of 1297 Reviews