Not Verified | I was here in July. Super hot in airport. Do they not have air conditioning? If you do, make it cooler. I was sweating. Very limited seating at gates. Prepare to sit on the floor or stand. Electronic passport system didn’t work and no one around to assist. To get to gates you gave to walk thru a duty free shop maze. No signage where to catch an Uber. Uber says go to kiss and leave lot. No signage for that. Overall a hot, crowded, poorly run airport.
1/10

"worst airport I have ever encountered"

Not Verified | We departed from Terminal 2 and this is the worst airport I have ever encountered. There were limited shops and eateries and the prices were very price. In addition there was not seating at the gates, so when you flight is delayed for an hour or two all you could do was sit on the floor. Horrible airport
4/10

"staff who helped us were fantastic"

✅ Trip Verified | I confess we need help with the check-in kiosk as we had never used one before and the two-stage process to get boarding passes and then luggage tags was confusing. Surely this could be simplified and ask the questions about tags without so much fuss? Same with the bag drop, but purely because of our lack of experience. The staff who helped us were fantastic, as were the security and passport officers. How much more pleasant when people ask, instead of order, smile and engage with passengers like adults. When it came to boarding however things turned downhill rapidly. The staff checking board passes and passports were fine, except they sent us down way too early. As this was a remote stand we needed a bus transfer. The wait area at the bottom of the stairs was small and already pretty full of business class px and families. By the time everyone had tried to cram into the available space it was getting pretty dire, hot, cramped and little air. I times fifteen minutes wait and we had already been down a while. Not good, in fact dangerous.
3/10

✅ Trip Verified | Upon arrival at 23h I have absolutely no complains, border passport control was an acceptable time and baggage reclaim ready to be collected. On departure, on the other hand, all had gone alright until departure time when delays after delays happened without taking into consideration passengers. First boarding started already late to a remote plane position. I really can not understand how an airline that charges much over the average compared to its pairs send their passengers via bus. The seating area designed to passengers on that flight was not enough for 1/8 of people about to board. Once inside the bus and completely overcrowded, buses took over 10-20 minutes to leave gates and if not enough once it did and finally got to the plane another 10-20 minutes to let passengers out of the bus to board the plane. All under heat wave days with temperatures over 30 degrees. Delays happen and are easily understandable as long they keep respect towards their customers. Very disappointed with the way it's been dealt
1/10

"Avoid this airport at all cost"

✅ Trip Verified | Avoid this airport at all cost. This is by far the worst airport I’ve ever flown through. I’ve flown internationally plenty of times, and I consider myself to be pretty flexible. I've never seen anything like this. We waited in line at passport control for 4.5 hours, dealing with the rudest airport staff I've dealt with in a long time. This resulted in us, along with hundreds of others, missing flights. Security is rude as well, and they are not willing to accommodate sensitive film that cannot go through x-rays. We flew TAP Air Portugal, and the airline is great, but the fact that you have to connect through Lisbon is not worth it. Beautiful city, terrible airport.
1/10

"an excuse for extortion"

✅ Trip Verified | I was told by TAP check-in agent not to stress, I had lots of time before a flight with my dog to Nice. But x-raying the dog's crate was slow and inefficient. When the agent left me, I rushed to the gate, but was told I was 5 minutes late! 20 minutes before flight time, they refused to let me on. And I had to fight to get my dog taken off! Then I couldn't find where they took her. I met 2 Swedish ladies going to Stockholm looking for their 3 dogs for the same reason. They were told to take their time and then missed their flight too. So disorganized! But TAP forced me to pay for another ticket, next morning. Then the whole bad experience started again, bumbling over x-raying the crate, even allowing an extra hour it was clear they were going to make me miss my flight I made a scandal in the check-in area and a TAP employee, on her own initiative, took me where I needed to go and pulled strings to get me and my dog on the flight in the nick of time. Never again! I made a complaint to TAP and Lisbon airport, but neither ever answered. I expect it was to force an extra payment, just after the lockdowns and airlines were hurting. But that's not an excuse for extortion. 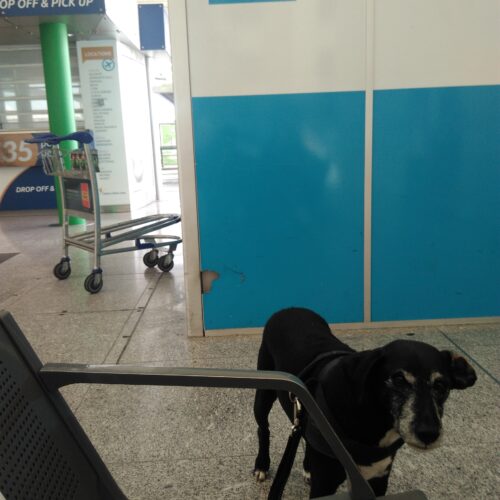 ✅ Trip Verified | The worst airport experience I've had (as of June 2022). Upon arrival, it took 2 hours to get through passport control. The passport control officer didn't even ask for a negative COVID test result even though it's required to enter Portugal. He stamped my passport without asking any questions and let me through. Yes, I waited 2 hours for that. On departure, I had to take out all the liquid in my carry-on luggage, toothpaste, mouthwash, etc, all in 2 oz travel container and my luggage still needs to be inspected. The security officer unpacked all my stuff. I had to repack my luggage. Everything was disorganized and the signs are confusing! Third world countries have better airport operation than Lisbon. My advise is not to have carry-on luggage so that it's easier to stand in line for hours on end and not have to pull around anything while trying to figure out the mess.
1/10

"the worst airport I have seen"

✅ Trip Verified | Lisbon Airport is the worst airport I have seen. They threat people like sheep, place them for same flight in the one place, separated by ribbon and policemen. It does not matter it's too crowded and no place to sit, you have to stay in that place. And if next place is totally empty they do not allow you go and sit or be there. Specifically today in gate 44 they collect few hundred of passengers to US, most of them were standing more that hour, and same time next gate 44A for future Toronto flight was totally empty. Woman employee came and asked some people who were sitting next gate just leave and go to their crowded gate to stay. And she was extremely rude, even she did call police for these passengers. Very unprofessional, unfriendly and rude. Never saw anything like that in any other airport. Don't mention about huge lines everywhere in airport. 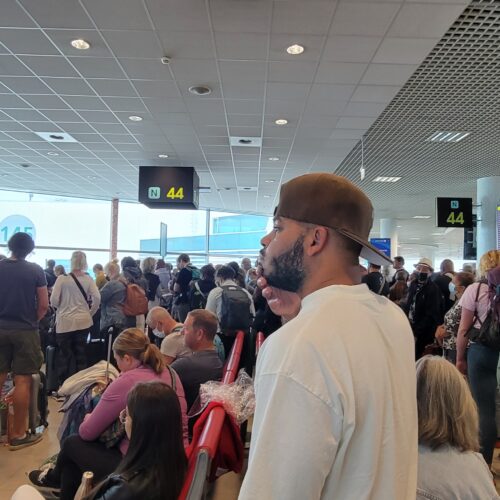 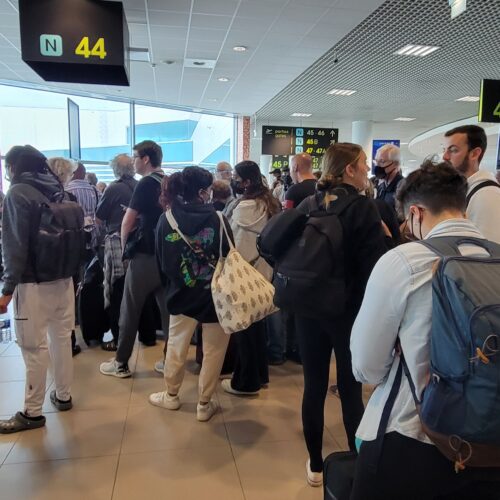 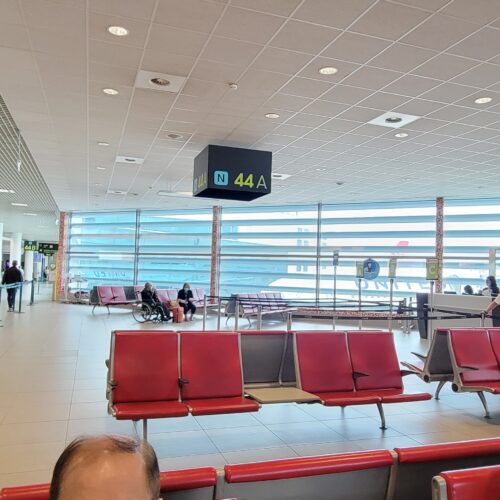 ✅ Trip Verified | Traveled through Lisbon on my way to Spain and was there on 05/21 and again on 05/29 for my return flight. A horrible experience that matches what other reviews on here indicate. The airport itself appears to be a more modern design with facilities that should be able meet the needs of travelers. The management and organization of this airport made it an absolutely unpleasant experience. On my way to Spain, we had over two hours to transfer flights and like many others, we ended up stuck in the line for passport control. There was insufficient signage and no staff anywhere to answer general questions. There were two people working in the booths. There were hundreds of people waiting to get through, many people aware that they were going to miss their flights if they were required to stay in this line. There was one staff member that appeared at one point and did take some people out of the line and allowed them to move up front, but this was not the experience of the majority. I did ask if we could be moved up and was told no, because we had 20 minutes yet before boarding would start on this flight. Mind you, I would have expected to have time to use the bathroom and perhaps buy a bottle of water and a snack. As it happened, we did get through and make our flight but had no time to spare. On our return flight on 05/29, we had an equally terrible experience. There was no room for the crowds in the airport that afternoon and evening. There was no one we could ask about what gate we might need to be at. The dining areas were jam packed and it was difficult to find anywhere to sit. During our 4 hour delay, I tried to ask a question at the TAP kiosk, however the line was so long I left and tried coming back three times. Granted, not the airport's' fault, but the given it is Portugal's largest commercial airline, you would hope they would have adequate staffing to help meet the needs of visitors. The wi-fi at the airport was weak or not working. The electronic check-in kiosks I tried to use were out of order. The announcements for gates only gave updates on the most current flights, so anyone wanting to know where they needed to be for their flight was out of luck if their flight was not leaving in less than an hour. The management of the cues while boarding was totally inadequate, with lines of people backed into dining areas of nearby restaurants and filing into nearby corridors. There was even a lengthy wait to get into the men's room when we arrived, which is something I have never seen at any airport. The overall experience was a total turnoff, which is a huge disappointment since I have been wanting to spend some time in Portugal with friends and would want to know how to best travel there without having to go through Lisbon.
1/10

Not Verified | This is the worst airport we have ever travelled from. We had already checked in on line so went straight through to security which was the best thing about the airport. Once through security and the usual duty free area we expected a departure lounge. No such thing. You walk straight into a area with departure gates. The area was jammed with people. Nowhere to sit, everyone desperately looking for the opportunity to jump onto a seat when someone moved. Jammed in with people queuing to board or nowhere else to stand. The couple of eateries had seating areas which were full and no-one moved once they had ate because there was nowhere to move to. Long queues for food. Unfortunately we had a flight delay which made for an even longer uncomfortable wait. When the flight was called which was EZY2370 chaos again no direction from staff, 2 flight queues with passengers mixed together because no-one knew where they should be. No signs for priority boarding. All in all a very frustrating and potentially unsafe experience. Why is Lisbon airport allowed to have such large passenger numbers when there are no acceptable facilities or capacity for them. Have we learnt nothing in this post covid age about keeping passengers safe and well. It certainly didn't feel that way on 19/5/2022. We won't be visiting Lisbon airport again.
1 to 10 of 295 Reviews