✅ Trip Verified | American Airlines kiosk not work and unacceptable personal for need and slow service in the baggage drop off, security check point is slow and rude personal for family members including kids.
2/10

"We almost missed our flight due to this"

✅ Trip Verified | My laptop with my 3 cell phones were sent to the back for an additional security check. The second scan didn't produce anything wrong. We almost missed our flight due to this additional scan that was caused by what? It was unnecessary! Maybe the security scan machines are defective and/or need additional cleaning/rebooting?
5/10

"the TSA checkpoint was confusing and frustrating"

Not Verified | Going through the TSA checkpoint was confusing and frustrating. The TSA agents kept giving me conflicting instructions. Take off your shoes, you can put your shoes back on if you walked through the K9 area, put your shoes on to walk through the metal detector. It made absolutely no sense and when I acknowledged it I just received blank stares from them. The conveyor belt stopped working because someone’s bag jammed it because the TSA agents failed to tell the person to put their bag in a tray. I watched them watch the person put the bag loose on the conveyor belt and then fail to give them correct instructions. Then as they were trying to fix the jammed conveyor belt a TSA agent came over to where I was and said that it had stopped working because a tray was still in the tray dispenser. I don’t believe this had anything to do with what the problem was, and there were trays sitting in other tray dispensers, but they decided it was the one in front of me that was the problem and gave me stern look. Again, that makes no sense, my tray didn’t jam it. They need to improve their system and communicate better with each other and with people who are traveling because we are not mind readers. I see this happen a lot with incompetent employees, they can easily blame the customer for a problem. In this case it really seemed like the TSA agents were causing problems for themselves. What would a person gain by not following instructions and delaying their travel time at the airport? I felt frustrated enough to write this review, and felt completely validated to see other negative reviews.
1/10

"the worst airport I’ve ever been through"

✅ Trip Verified | This is the worst airport I’ve ever been through. I travel here several times a month for work and have never not had my flight delayed or cancelled. 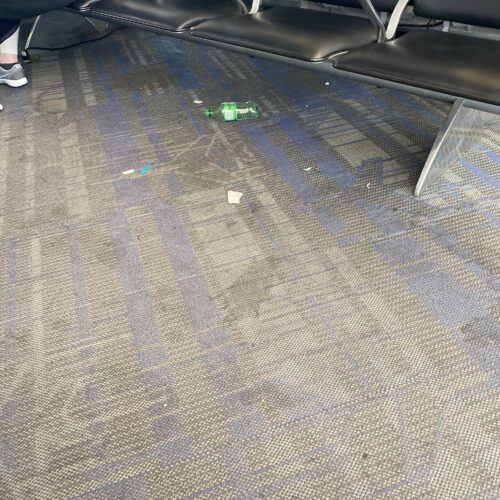 "There are no signs anywhere"

Not Verified | Long term parking is ridiculous. You park on International or Domestic side which both lead you to terminal 3 D Gates. We almost missed our flight for departure because the security gate was not open and had no other way to get to gate C. We had all 3 teams to get there. When arriving try to find the Tram but you can only take a shuttle. I asked several people where to get to long term parking and not one person could answer other than leading me to Public parking. Never mentioned a tram. So we wonder around again looking for a way to get to Terminal 3 because we arrived in terminal 1. There are no signs anywhere but on the last elevator by the front door. All the TSA agents were absolutely rude when asked any questions. Not only by us but by anyone around I saw asking them how to get to a location. Get better signage, better way to longer term parking and friendlier staff.
3/10

"Any future trips to Vegas, I'll fly else where and drive in"

✅ Trip Verified | Arrival uneventful with exception of extremely long walk to bag claim. Departure gate c/d TSA security rude when an item was out of spec with rules. Just say "sir you can take the bottle and dump it and re-screen, or leave the bottle", all of his attitude wasn't called for. I don't stereotype but this falls right in line with what I would have guessed. I re-screened and passed. Looked at the TSA agent and told him to have a really great day. TSA body scans kids. I know, because they tried to scan mine. Just because shes tall doesn't make her older. Seating areas look like the 1980's. Charging ports in that area are few and far between. The prison gray, white and black color exude such warmth and welcome. Any future trips to Vegas, I'll fly else where and drive in. 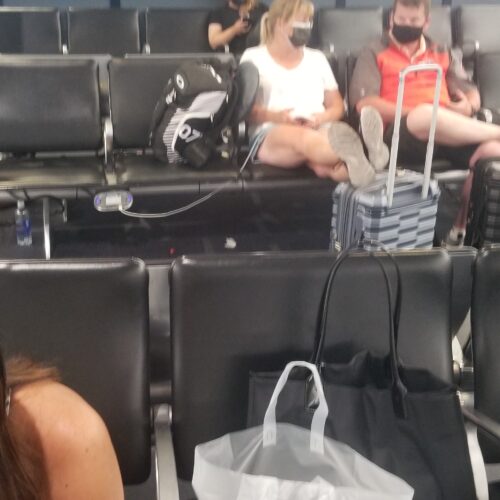 "She rudely told me to move on"

Not Verified | Arriving at the Terminal 1 passenger pickup this morning from the cell phone lot, I exited my vehicle and walked to my trunk to open it up. I was immediately approached by the ‘traffic person’ before I even got it open. She rudely told me to move on. I said my friend was approaching but she again told me I needed to move. My friend was approaching my car but this rude woman told me to point her out because she didn’t believe me. There were only three or four people who had finished crossing the walkway. There was no line of cars waiting for anything, in fact there were very few cars there at all, but this woman was determined to make me leave. That’s when my friend stopped with her luggage to put into the trunk. I had been stopped less than two minutes. The woman didn’t leave us even then but continued to be as unpleasant as she could. My friend and I are both in our mid seventies and I hate to think how someone with a disability would be treated. If this is the way you represent Las Vegas to the world we deserve the very worst criticism of all. The attitude of these people should at least attempt to be hospitable if not helpful.
2/10

"This an obtuse way to treat people"

Not Verified | Get more rental car trams / buses. This an obtuse way to treat people. I have never waited this long to get on a rental car bus either arrival or departure. Absolutely ridiculous! Makes me not want to ever come back here, get it together. 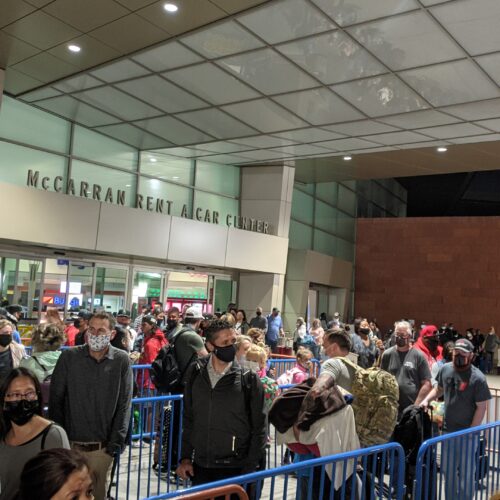 ✅ Trip Verified | When we started our trip in Savannah, GA we had ask for assistance. When we arrived in Las Vegas there was someone waiting at the door with a wheelchair. This employee was excellent! He took us from one terminal to where we were to pickup our luggage. Waited with us for the luggage then took us out side and hailed a cab for us. He also gave us his card so when we return to leave we can call on the way to the airport and they will be waiting for us to get us to the plane. Even though we were basic economy we were treated like VIP’s by American Airlines.
3/10

✅ Trip Verified | For such a newly improved airport, McCarran sure is trash! This is the worst practically new airport I've seen anywhere in the world. I don't know what the casino revenues collected in Vegas, or even the airport itself, are going toward, but it sure isn't toward having a meaningfully modern, efficient airport, despite the many years and dollars spent on revitalization. For the pros - 1) Baggage claim was actually efficient. 2) Signage inside the airport was ample. That's about it. As for the cons? 1) There is no efficient means to take a rideshare or taxi, as the wait for either can be over an hour. It took me 40 minutes and I felt lucky compared to the people around me. 2) There's no effective means of public transportation to the Strip and this is considering that the airport is practically on the Strip! Not even a monorail. 3) The terminals have mostly new, though very depressing and uninviting, architecture and design. 4) The terminals were poorly lit, in both the late evening and early morning. 5) I saw a tiny handful of anyone working in the airport who smiled, or who otherwise just didn't look angry. 6) Airline (baggage claim) and security personnel were almost entirely ill-mannered and officious. Not just "having a stressful morning and need coffee," but flat-out rude. 7) Apparently this airport doesn't believe in automated check-in and baggage machines, even though they're chock full of them, Alaska, Frontier, Southwest, etc. weren't operating theirs, and required their passengers to stand in long lines (of course, if you checked in in advance and have no baggage to claim, this isn't a problem for you). 8) LAS is just a really dirty airport overall, plain and simple. 9) Practically nothing was open in the airport at either 9pm or 6am, I guess this isn't a huge deal to me only because we're still in the midst of a pandemic. I understand that LAS has to interact with a never-ending array of passengers who don't even understand clear airport signage or etiquette, but I would respectfully suggest that LAS look to Salt Lake City (stunning new airport with overall great service) or even Phoenix (which is above-average but not great) as examples of how to operate a respectable airport.
11 to 20 of 119 Reviews