"rudest staff I have ever encountered"

✅ Trip Verified | The rudest staff I have ever encountered at an airport. They must do a roaring trade in Power packs. I too was advised that my power pack needed to be in my hand luggage. Then when my hand luggage was checked I was told I could not take it as they could not read the capacity on it. I offered to look details up etc but nothing I said was of any interest to them. This is the first time that I have encountered this at any airport with the same power pack. Again as others, I explained that I had been allowed to take it on the same airline to arrive in Krabi. There was no previous warning of this. When we suggested that we destroy the power pack (rather than hand over to them) I was told this was not possible. For such a small airport, in such a lovely place, this is such a strange rule and very unfair as it left me without the ability to re-charge my phone. As stated previously, even when we complained, I was told that I could not take the persons name, and could not complain to anyone! The other staff just looked on giving us dirty looks! To be honest their attitude was disgusting and the supervisor we spoke to, just shrugged and put a piece of paper in front of us saying that all Power packs should be in hand luggage, then pointed to the small print of the capacity needed to be visible! Pretty useless advise if you are not advised in advance by the airport or the airline we were travelling with.
1/10

"Staff were extremely rude and dismissive"

Not Verified | As expected Krabi is a small airport. We had no issues with the arrival, however the departure was a whole other story. Staff were extremely rude and dismissive from the start! They wouldn’t attempt to communicate and explain why I could not bring a power bank (even though I brought it into Krabi via Bangkok) just kept showing me a card to read. Annoyingly the wattage was no longer viable and they just kept saying ‘no prove’ even though they could clearly see the power pack was very small and was nowhere near the wattage limit. I even pulled up the official product website to show them to which they just laughed and said 'no'. I wouldn’t be so annoyed if there was signage showing they aren’t allow or if staff had attempted to communicate why it wasn’t allowed rather then just laugh and put it in the bin.
1/10

"most rude staff ever"

✅ Trip Verified | Absolutely the worst aiport in whole Thailand. The most rude staff ever. Especially ladies who check lauggage at the gates. Try to avoid it as much as it's possible.
1/10

"have no sense of customer service"

Not Verified | This is the worst airport I’ve been to and I travel often. The staff are completely rude and have no sense of customer service. When you try to speak with them it’s like talking to a wall. They took my portable cell phone charger with no reason. They assumed it was over 32000mvh which a monkey could tell that it isn’t that powerful. They also let another person keep theirs, so they are quite biased and not consistent. I have a lot of friends traveling to and through Thailand and I’m advising them all to avoid this airport completely. They should either completely shut down or hire competent staff members. If I could give negative stars I would. 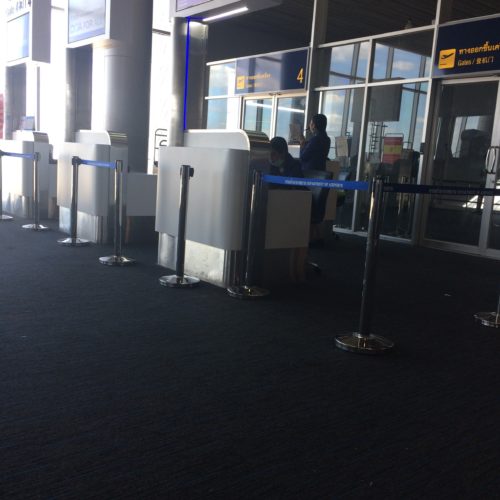 "have never had such a bad experience"

Not Verified | The staff are extremely unfriendly from the beginning, they treat you with no respect and bad manners, I have never had such a bad experience with all of the staff of an airline before. They are disorganised and they do not understand English.
1/10

Not Verified | The worst airport ever. An International airport with some employees that don't speak English, they are rude and do not allow water for a baby and baby food also thrown. My power bank which they didn't make an effort to check or to know the capacity after years of usage and travel all over the world with no problem suddenly got thrown by a lousy airport like Krabi.
3/10

✅ Trip Verified | When I read the reviews, I’m not surprised at all cause almost everyone experienced bad service here. Firstly, I was already upset that they threw away things that other airports are okay with. But that was still ok for me Secondly, when I reached the passport checking counter, the officer in charge was asking for my Arrival card. My fault that I can’t remember I got that when I first arrived cause it was with my friend. When I told the officer that I didnt get that she replied rudely to me and laughed with her other officers that were there. After that, my friend came and passed to me my arrival card and I told the officer can she please not be rude and talk nicely. She rudely put down my passport and asked me to check to other counter. The lady at the next counter was so professional towards me even though it was my fault for forgetting the arrival ticket and even asked if I’m okay and wished me safe flight. That was really professional and I respect her calm and kindness.
1/10

"Power banks they throw them away"

✅ Trip Verified | Krabi Airport is the worst airport. Things which are allowed as a cabin baggage at all the major international airports are not allowed here at a small domestic airport eg. Power banks. They throw them away.
1/10

✅ Trip Verified | Very disappointed in the quality of this service. Discrimination against female rights. I’ve never been treated this way in my entire life. Was made to queue back in the line after already passing customs. The staff did not let us back through but let 1 other man through with the same situation. I have nothing more than utter disappointment for this airport. This is the first time this has ever happened to or another member in my party.
1 to 10 of 27 Reviews