Not Verified | I used CCU recently both for arrival and departure in the last week and have noticed a significant detoriation in both arrival and departure areas between 2016 and 2018. Staff are back to being rude like the olden days. It seems rude and unfriendly staff is the trademark of this airport, portraying an extremely bad face for our dear city. Didi has done a great job of building a world class airport. Now only if the people working here would learn a little bit about how to treat people rather than steal from them before 15 hr flights, CCU would be a great airport. At least one can hope. PS: Only airport that does not allow passengers to carry a lighter, even though it is allowed by the IATA.
5/10

"has been a noticeable deterioration"

✅ Trip Verified | I had the chance to use the international section of the airport four times this month - twice for arrival and twice for departure. Since I have used this airport many times I have to admit there has been a noticeable deterioration in the quality of the travel experience it offers. There were more passengers at the arrival and departure immigration queues and the officials continue to examine documents with exaggerated attention causing delays. Landing cards, required to be filled out for foreigners, are hard to find in the arrival lounge. There was no beer available at any of the food and beverage outlets. The in-line baggage checking system was down for maintenance requiring everyone to put their bags through an X-Ray machine before taking it to the airline counter. Some new shops and eating places have opened - the offerings and ambience are uninviting. The business class lounge is small but comfortable and the snacks are primarily meant for the Indian palate. Internet was available, elsewhere in the terminal the procedure to access wi-fi is simply impossible to follow. - I gave up. The terminal is clean, the signage clear, and the toilets, though they look dated and inelegant, worked and were reasonably clean. A relatively small and easy airport to use, it succeeds in delivering its basic functions. No place to linger and would be terrible if one got stranded.
5/10

"my experience this time was less thrilling"

✅ Verified Review | I used the airport to visit the city during its biggest festival - Durga Pujo. Arrival at 2.20 am in the morning made the exit through immigration fast. However, the separate line for Business Class passengers has been done away with (presumably because there are very few such passengers using this airport) which meant standing in a long line with everyone else. Fortunately, that was the only in-bound flight to arrive at that unearthly hour and thus one plane load of people had to be processed. A counter has disembarkation forms that need to be filled out and presented with the passport for presentation to the officer. Interestingly, after the passport is stamped and you step through to go to the luggage claim area, another officer takes your passport to check if it has been appropriately stamped! The duty free shop just before the terminal exit has been expanded with more items. Using the airport to depart was unpleasant. Being the festive season, I had expected a larger than usual crowd. But the immigration lines for passport check and security frisking were exceedingly long, with no separate counter or lane for Business Class passengers. It took over 35 minutes to reach the passport control desk. At least they have done away with stamping the tags on carry on baggage after security. The terminal has a shop - Bishwa Bangla - that carries traditional handicrafts of the region and a superb place to pick up authentic craft souvenirs - which I have done in the past. Alas, tonight the shop was closed. I would have thought that with the larger than usual traffic footfall, this is when the shop should have been open giving departing tourists the chance to pick up local mementoes of their memories. The lounge, shared with several airlines, had a large spread of Bengali dishes, in keeping with the festival season. It was crowded. However, the bar closed very early - no serving of alcohol because of religious reasons. The bartender was kind enough to offer me two bottles of beer as he was closing down the bar. No newspapers in the lounge, only copies of a single issue of a business magazine. Cathay Dragon check-in was smooth and the ground staff was exceedingly friendly. I used the lounge bathroom - it was clean but smelly. Having used the airport countless times and usually very positive about it, my experience this time was less thrilling. The doing away with separate lanes for Business/First Class passengers, which was a perk that I particularly valued and which made using the airport a breeze, is a major disappointment. 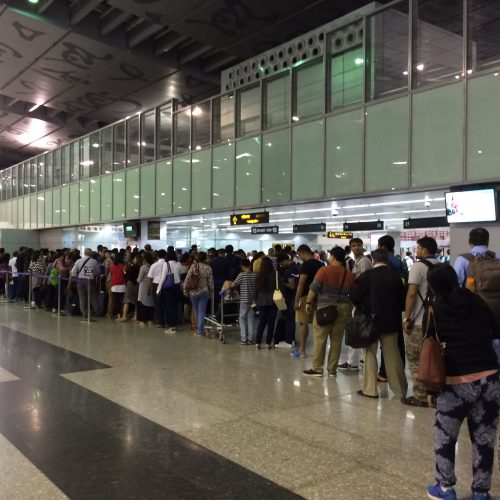 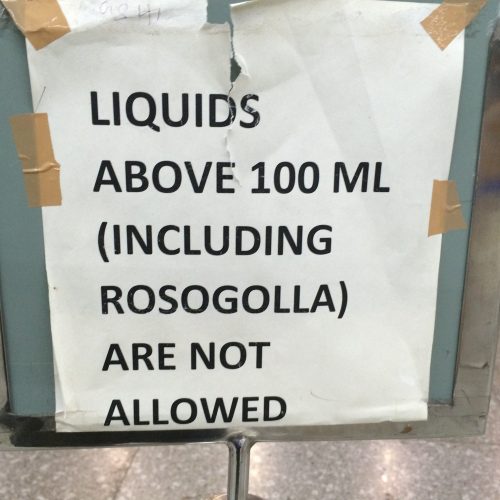 "quality of staff is deplorable"

✅ Verified Review | Pathetic airport. First off, the quality of staff is deplorable. They lack any sophistication and training and are crude in the way they handle passengers. The toilets are few and ill-maintained. And though it is classified as a silent airport, the airline staff make it a point to make blaring announcements and calls to passengers that do not show up at the boarding terminal on time. Such an atrocious nuisance!
1/10

"No bathrooms at the waiting arena"

✅ Verified Review | No bathrooms at the waiting arena at departures section which is terrible. The closest bathroom is a good 10 to 15 minutes walk! No adequate seating facility at waiting arena 3C. Terrible experience of having to wait 4hrs as a single traveller. Many travellers have medical conditions or natural biological necessity to use a restroom!
5/10

"Airport is pretty sound in its amenities"

✅ Verified Review | The Airport is pretty sound in its amenities. The airport has no public transport options after 8.30 pm and before 7 am. You have the only option of booking cabs which charge a hefty amount for short distances also. Between 7 am to 8.30 pm you have a number of AC buses which can take you to all the corners of the city. Inside the airport it has a very spacious look with a very high ceiling on which Bengali scriptures are written in huge letters. Overall there are a very limited shopping options with Flurys cake shop, some other confectionery and fast food stalls and a restaurant. Access to departures is only through Elevator or stairs but I could not find any automated stairways. Direct flights to your destination are generally not available but are available via Dubai, Hong Kong, Bangkok, New Delhi and Mumbai. One of the striking features of the airport is its parking facility which is underground and very spacious. The Airport is capable of hosting all classes of flights except the A380. Etihad mainly operates through its B-777 family and Air India operates through its A321 and B787 and other fleet members. The largest aircraft which I have seen in operation is the B747-400 of Air India, I guess that some other airlines may also use this. It is a nice place to hang out if you have a music player and your personal headphones. It is mostly a silent airport with not too much commotion of passengers.
3/10

✅ Verified Review | Infrastructure at Kolkata airport is just a one time factor, but most important is the efficiency which the responsibility of the airport. What is the point if it still takes "1.5" hrs for immigration. This would not be acceptable at any other airport in the world. I don't mean to present the problem and not indicate at the solution, I also do not intend to point fingers at the immigration officers, who were doing their jobs. I see this as a problem of flight planning, either there are no flights or the place is full. There are times say at 830pm when immigration is completely free and the officers are waiting idling. After a little while the queue is almost until the airport entrance. The best part is no one seems to complain, its another queue in life at Kolkata. Personally, with all the millions spent to upgrade the infrastructure attention needs to be given to this key issue.
8/10

✅ Verified Review | Kolkata is a vast and expansive airport. Needs a little warm colours to represent the city's warmth. Has very good food joints including Irish House. Easy and fast check-in to boarding route and plane. Very sustainable design with ample natural light and solar powered to an extent. Great customer service with cooperating personnel. Cabs (yellow cabs) as well as app cabs apart from luxury private cabs are ample and available 24/7 unlike my experience at Hyderabad Airport.
7/10

✅ Verified Review | My flight arrived at and departed from Calcutta literally at the dead of night. The flight was full and the immigration checks both times took longer than they needed to. It is a mystery to me as to why some times the examining of documents takes a minute or so and at other times almost 5 minutes - for the same passport and visa! A short form - a sort of landing card - is filled out for presentation to the immigration officer; no such forms at exit. A currency exchange kiosk with four individuals were changing foreign currencies into rupees - given that the Indian government had outlawed the 500 and 1000 rupee notes, one needed notes of lesser value to pay for the transport into town. Despite the kiosk being amply staffed only one transaction was executed at a time, because everyone was checking on the other's work and verifying all documentation. The prepaid cab service worked. I reached my destination in quick time. At departure, the check in was smooth but immigration again scrutinized my documents carefully. All in all, this remains an easy, uncomplicated, functional airport. Don't expect efficiency.
6/10

I was visiting Kolkata during their big cultural festival - Durga Puja - and thus both times arrival and departure was unusually crowded. Immigration checks to get in took longer because of the long lines. The officers at the counter were also rather slow. There is a duty free store with a selection of imported liquors and chocolates just before exiting the terminal. Good to pickup alcohol as the price is markedly lower than what it is in the city. On departure, there were long queues for security and immigration formalities but there was a counter for business class passengers for immigration which was quick but with no similar privilege for security check, it took longer to be processed and the baggage checking was quite thorough. The business class lounge had several dishes of festival food but the presentation was totally unappealing. The wifi service on the sole desk top computer did not work satisfactorily. I have used this airport many a time and it seems to function smoothly when passenger traffic is light. The festival-induced higher than average passenger footfall seems to strain the airport set up and diminishes the overall travel experience.
21 to 30 of 103 Reviews