"Kerry airport itself is nice but the staff there aren’t"

Not Verified | I flew in with Ryanair from Dublin into Kerry. Stress-free and the aircraft parks 5ft away from the “terminal building” at Kerry. Only around 6 bags on the carrousel and they were there as soon as we were off which was only around 5 mins after landing. Departure from Kerry was alright. The terminal is small and cute. Check in opens around an hour before departure, but the staff working in Kerry airport give off a rude vibe. The person in front of me had to pay 60 euros for being a tiny bit over (their check in bag) and I find this stupid since the flight wasn’t near half full. Security staff in Kerry were rude too, which I was surprised since the airport is very quiet. The detector seemed to beep everyone but it was quite modern. There is a small duty free shop after security and the staff there were rude too, no manners. Airside is just a small cute bar and a waiting area/2 gates. All in all, Kerry airport itself is nice but the staff there aren’t!
9/10

I flew from Kerry to go to Alicante (ALC) and back. Parking is not far from the terminal. When you go in the door, the toilets, cafe and check-in area are very close. Internet was fast and easy to connect to. Toilets were clean enough. The café has good food and there are two vending machines before you go into departures. It is a short walk to departures and security is not that long. There is two boarding gates with a small gift shop. Boarding went through very quick and the flight arrived 20 minutes early. We arrived back after ten days and we were early again which was great. There is only one baggage belt and it can get very crowded. Very satisfied with the airport and the experience. 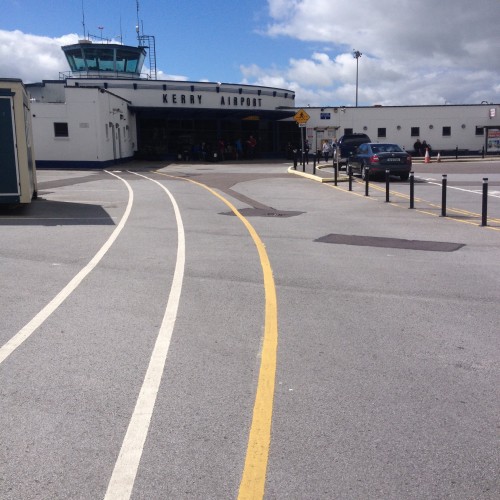 Often use these airport as it is my local. Very small and very nice. Celebrating it's 25th year of commercial services this year. Restaurant is conveniently placed close to check-ins and staff are young and very helpful. Everything is very smooth and thanks to its small nature very quick to get from check-in through security and to the gate. No long lines. However if a normal Ryanair 738 on a flight is boarding for London usually the waiting area becomes extremely busy with no seats left forcing people to sit on ground and on windowsills. Toilets are also not exactly very clean but still at standard. Overall excellent airport.
5/10

Recently travelled from Kerry airport to Dublin on Aer Arann. It was my first time using this airport. The airport itself is a short ride from Killarney. However the road signage could be improved especially in Killarney itself. The airport is a nice small airport in design complete with a self-service restaurant land-side and a small shop where one can buy Irish gifts airside. The main comment I would make however refers to the overall cleanliness of the airport. The check-in area is next to the restaurant and the wafting smell of dinner can be off-putting for passengers. In addition the floors and toliets are not shining which is a pity as with a small airport like this it should be very easy for the authorities to maintain this image. I recently was in Pau in France and although somewhat bigger I was really impressed by the ultra-cleanliness of the airport. First impressions last and I think the airport managers should carefully look into upgrading the overall airport image. This can only help tourism! Finally I found the check-in staff somewhat indifferent!