❌ Not Verified | My home town airport is disgraceful! My first complaint is that my family member and I were separated going through security. As of last Dec. 2017, they now send TSA Pre to a totally different gate for security check. Huh? When I asked one of the agents to explain, he was nasty and said it was easier for employees. I mentioned I didn’t like it. Oddly enough a few minutes later I was patted down for my Apple Watch and a nylon zipper on my pant leg pocket. What? I’ve worn the same pants through security before-no issues. My son was not patted down for his Apple Watch. The bathrooms at the gates are terrible. No soap or paper towels-gross. MCI-do something!
3/10

✅ Trip Verified | Arrived 2 hrs early in frigid temps with a carry on. People checking bags at SW lined up outside! After killing time for 30 min I happily moved to a side line so Seattle passengers only would get routed through the slow security check. It feels good to cooperate. Finally 30 min later Seattle customers done and all in line are feeling good. Our line was split in 2 and those who had been waiting the longest were in the TSA pre check, which I paid to have too. Then I watched as not only was our line ignored as the pre check, but also as the customers who had been waiting in line the longest. The agent who had asked us all to move aside, suddenly was making no eye contact and didn't say a word to the agents checking our tickets. I'm tired of being polite and helpful and then basic customer service ignored. People in line longest are next customer served.
1/10

"need to carry out huge changes"

❎ Not Verified | I am surprised this airport has one star. Not sure where to start, small, get full even with a small number of passengers. It smells and the worst part is? There is only one bathroom in the entire 50s gates area, don't know which line is longer, the TSA security or the bathroom lines. Officials need to carry out huge changes to this airport. Look at the picture I added for bathroom line. 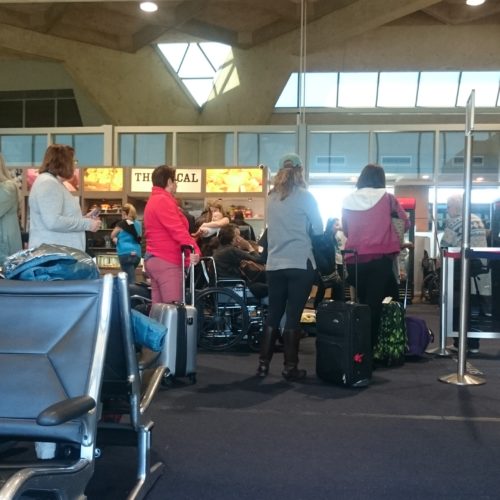 ✅ Verified Review | Long overdue for replacement. If you have carry-on only, you can skip the long lines at the ticket counter in hopes of getting into the security line sooner. TSA Pre only recently became an option for AA travelers, and the newly renovated gate area for AA now links all their gates, but it still suffers the same problems that Southwest’s gate area in B does - lack of seating, no clear and direct paths between gates, sparse charging ports (and finding one that actually works is even harder). Food options airside are minimal and horribly overpriced, usually consisting of day-old factory made sandwiches, wilted salads, and $8 bottles of juice.
1/10

"the worst major airport in America"

✅ Verified Review | If you like having zero options for food (or paying $10 for a cold and stale sandwich), having to go through security to use the bathroom, and being in extremely close proximity to people going through security checks as you connect to your next flight, Kansas City Airport is the place for you. This is easily the worst major airport I've ever been to. There are only two restaurants, and both somehow seemed like 1 and 1A for the title of "Saddest Place on Earth". When your best food option is a microwaved sandwich from Starbucks, you know you're in a whole new level of suck. Also, for some odd reason, half of the airport is walled off and is inaccessible to the general populous. Why? Good question. This isn't Westeros. I have heard from locals that the airport provides easy in and out access, which could possibly be true. But the fact that this place hasn't been updated since the 70's is incredible, and the shocking lack of restaurants and cleanly bathrooms make Kansas City International seem like the worst major airport in America.
3/10

✅ Verified Review | I'm sitting in the B gates area now waiting out a 3 hour weather delay. The women's restroom for all B gates only has 3 stalls. There was no soap, paper towels, or toilet paper. Southwest has put in charging stations, but the actual airport offers few, if any. To get to nicer food or restroom options, be prepared to leave security and be re screened in order to get to your flight. The gate seating area is inadequate for a full flight of passengers. Be prepared to camp out on the floor.
1/10

✅ Verified Review | I arrived American Eagle terminal C at Kansas City Airport, and had a departure connection with Alaska Airlines (SkyWest) terminal B. I had to exit the airport, take a shuttle bus and go back through TSA security. The airport was crowded and very confusing. I travel a minimum of 4 times a year and at age 77 I am quite capable of getting around with ease and understand directions. All airport employees, bus drivers, and airline agents were very friendly and helpful in a difficult situation as I had a short connection time. Once I arrived at terminal B, I immediately went to the Alaska Airline customer counter. The agent printed up a new boarding pass with TSA pre-check printed and marked with yellow highlighter. The agent then escorted myself and several others to the TSA check point, and explained to the TSA agent that the plane was in boarding process. The TSA check line was backed up. The agent explained they were not equipped for TSA Precheck and we would go through the routine boarding process. I followed instructions removing my CPAP machine from the original case, before placing it on the screening belt. Removed my shoes, and proceeded through the screen machine. I set it off and explained I was wearing suspenders, I was told to go back, another agent came up saw my suspenders, and politely explained to her co-worker I was wearing suspenders. I was told to go back through the screen machine, of course I set it off again. After lifting my shirt and showing the agent once again the suspenders the agent said put your shirt down (I was wearing a t-shirt under the suspenders) so no skin was showing. Another agent than began the long process of explaining the pat down all the while the plane was boarding. The agent commenced with the pat down process. His pat down was humiliating. Once I boarded the plane several passangers remarked "they sure gave you tough time". The work load on TSA would be greatly reduced if MCI Airport could make it so it is not necessary to go through security when changing terminals from one airline to another. The current transfer procedure is totally outdated and unacceptable.
2/10

"departure gates are crowded and noisy"

✅ Verified Review | This airport reminded me of other woefully inadequate facilities like LaGuardia. The circular terminal building was never meant to have the secure area splitting the length of the entire concourse. Travelers in transit have to exit the sterile area for the larger bathrooms and better food choices. The departure gates are crowded and noisy. This place is awful, and I'll avoid connections here in the future.
3/10

"my hometown airport has deteriorated"

✅ Verified Review | I am a Kansas City resident who travels frequently for my job so am very familiar with other airports around the country. I am appalled at how far my hometown airport has deteriorated. The bathrooms are despicable! Filthy and in disrepair every single time I travel which is 2 to 3 times per month. The food choices are sparse and extremely expensive as compared to other airports. It's time KC woke up and does something about the airport.
1/10

"this place is awful"

✅ Verified Review | This place is awful. I feel as though I am in a cattle yard. Having to go through security just to use the restroom is ridiculous. Talk about deterring people from flying. 1 bathroom "inside" the wall to service passengers is bogus. I will never fly through this aiport again. Avoid this place, even if it means paying more for a non-stop ticket. Lesson learned.
21 to 30 of 77 Reviews