Not Verified | I had read different reviews on JED stating it was a very particular airport, but what I found was beyond my expectations. Having arrived from DXB enroute to FCO with an eight hour night transit, I spent about an hour queueing through several controls to reach the transit area which is more akin to a scene of Dante's inferno than a modern era airport. A simple relatively small hall filled with several hundreds of human beings spread across every inch of space. All seats were taken and dozens were sleeping or sitting on the ground, which was covered with litter. On other areas people were praying, while all around there was chaos, sounds and smells. Continuously flight announcements were yelled through the loudspeakers in Arabic and English, adding to the total chaos. Toilets were filthy at an incredible level. Trying to reach the Saudia lounge was useless as it is no longer possible to access it on a pay basis. So either you're Flying First or Business on a confirmed reservation or you're out. So the only alternative is finding a place to sit on the ground, try to close the eyes and just wait.
1/10

Not Verified | Small, crowded, uncomfortable. Filthy bathrooms, poor duty free. Bus rides from terminals to planes that takes more than 15-20 mins, after you go from plane to bus to immigration. You still wait for an hour for the bags! 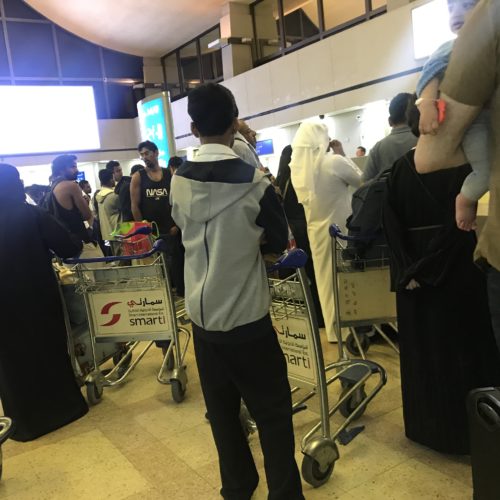 Not Verified | Having a pleasant journey with the Saudia airlines who couldn't do enough in the way of hospitality my experience was ruined by the airport staff. To think this is an international airport not one spoke a word of English. Absolute arrogant set of staff from the baggage handlers to the check in crew. The queues were laughable and they couldn't care less. They would just stare at you and then resume their flirting with each other. Not one person was willing to even give a smile. Utterly disgusting set of employees.
1/10

"Absolute joke of an airport"

✅ Trip Verified | Avoid South Terminal like the plague. How can a national airline use a terminal so small? Arrivals - 25 minutes bus from plane to terminal. 2 hours from exit plane to exit terminal. Taxi drivers are thieves fully supported by airport staff. Customs staff wanted to know why I had a book in my carry on luggage for a 12 hour flight! Departures - Long queues at check-in and immigration due to staff all watching football match on their phones. Business class queues 10 times longer than economy class and not moving. No business class lounge for business class travelers but an empty first class lounge. Seating for less than 1,000 people. 2 overpriced coffee shops with seating for 20 customers only, which was of course full up. Deafening PA system. Only 1 ATM machine that doesn't accept international ATM cards. 1 smoking area the size of a phone booth. Of course nobody uses toilet paper so it's not supplied. No free wifi without supplying phone number which leads to cosmic amount of garbage advertising messages. Bus got to aircraft then had to wait 20 minutes until plane was ready to receive passengers. Absolute joke of an airport.
4/10

✅ Trip Verified | This airport is overcrowded and has many unsanitary conditions. Less than 10 toilets bowls each for male and female. Avoid the international terminal at all costs.
1/10

"have never seen such filth"

✅ Trip Verified | Only two words are necessary to describe this place - cold, pigsty. I have never seen such filth at an airport in my life. And I went there right after a trip to India, so that's saying a lot. Avoid this place at all costs! PS - if you do come here, bring your own toilet paper.
1/10

✅ Trip Verified | It's the worst airport ever I've been. It's dirty, noisy, uncomfortable. We had a transit flight in 8.5 hours and it was like a hell. Toilets are wet and messy without toilet paper. Advice: almost immediately after you enter the airport there is a lounge waiting zone. You are eligible to stay there if your transit is more than in 6 hours. Unfriendly staff will try to kick you off but trust me - this area is way better than the main waiting zone.
1/10

Not Verified | We flew from Istanbul to Mauritius and was for the first time to Saudi Arabia and was expecting an airport in the same league as Dubai but wow was I disappointed. The most arrogant and rude immigration staff that I have ever encountered in my life.
1/10

"I had no seat to relax on"

✅ Trip Verified | Worst airport. Transit area is very very small. I had a transit of 10 hrs and for 6 hours I had no seat to relax on. I had to stand for 6 hours because all seats were occupied and I did not wanted to sit on the floor. Toilets were very dirty. There are a few food shops with decent food. There are a few reclining seats to sleep on, but they are always full with people waiting for them to get free. Seats though do not have arm rests, so you can sleep on the seats if they are free. Wifi is free and do not require a phone number to connect. I never complain, but this airport was too much. This is my first ever airport review. 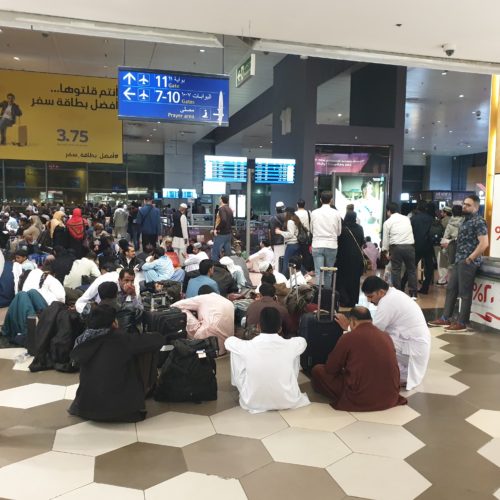 ✅ Trip Verified | It’s a painful experience, dirty, smelly and luggage waiting time took for ever. Dirty and wet toilets, place is full of mosquitos, if you can avoid it then avoid it.
21 to 30 of 129 Reviews