"crowded and quite poorly organised"

✅ Verified Review | I had to get from Amsterdam to Antalya, and in winter time Turkish seemed to be the only decent option with a daily service. The flight was via SAW, the other airport in Istanbul. The scheduled transfer time in SAW was 1 hour, however the crowd at the passport control was far too huge to manage this within the time indicated in the reservation. I approached employees of Turkish Airlines and informed them about possible problems with my connection to AYT, and they could not help but tell me that yes, indeed there is no a way to pass through the passport control except waiting in the line, then another employee put me on a fast track line, and then another one kicked me out of there in 20 min, explaining that I was not entitled to it. At the end, it took me over 1 h 30 min to pass the passport control, and I was rebooked to the next flight departing from SAW at 00.10 am instead of initially planned 8.05 pm. On the transfer desk they also gave me a voucher for a meal in McDonalds, the voucher could be redeemed only for the cheapest burger menu worth c.a. EUR 4.5. Needless to say, that is below anything that can be expected from a major air carrier, and I went to another place to get my meal on my own. The airport itself is crowded and quite poorly organised. There is no free internet in the airport, and the paid access is quite challenging to configure and get through. The are several food courts, most of them look cheap, while those better looking are expensive and the food is very mediocre. Most of the airport and Turkish Airlines staff cannot speak any English, and those who do, are not particularly helpful. Summing up, the transfer desk of TK in SAW is not functional, as most of the staff cannot speak English and do not know what to do in case of the issues with problematic transfers, I also need to point out that they were neither attentive nor particularly polite (to put it straight - they just did not care even a bit). I would strongly discourage anyone to travel via SAW, as the airport cannot handle transfers in a decent manner, due to apparent infrastructural, organisational and human capacity constraints. The voucher for the cheapest McDonalds meal in SAW was the final touch in the ungraceful picture of transfer in SAW. 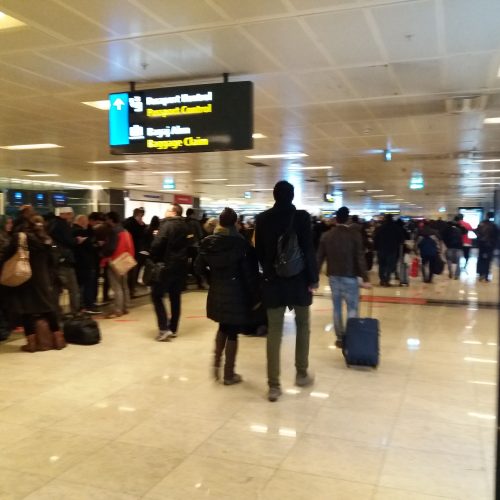 ✅ Verified Review | The airport layout at Istanbul Sabiha Gökçen is quite compact with only 1 terminal which should mean short walks to the check-in desks and the gates normally. However, expansion in the number of flights means it is slightly chaotic, so allow plenty of time. I travelled through SAW 3 times on international flights in the last month (August). Outbound experience The airport ground staff are inefficient, but if travelling in Business Class you can use the priority entry (first security check) and TK CIP passport and security control. TK/TGS staff allow you to use the priority CIP lines but the service only starts at 0700 an the security staff are sometimes 10 to 15 minutes late. There is no communication between the different services. Majority of security and TK/TGS staff don't speak English, they use hand gestures to communicate with non-Turkish speakers. At TK business class check-in counters the ground staff don’t speak with you during the whole check-in process - all is done without exchanging a single word. Inbound experience Business Class passenger can use the priority line for Turkish immigration, which goes fast, but then you have to wait around 45 minutes to get your “priority” labelled luggage delivered. IST Ataturk which has more flights to handle is sometimes faster the SAW. Duty Free staff is inattentive and cannot speak English.
2/10

"the malaise is disappointing"

Istanbul Sabiha Gökçen is a clean airport. Ground staff is inefficient. Duty Free staff is inattentive and cannot speak English. Turkish Immigration is always rude and they aren't any different here. No free WiFi is a big no-no. This airport has so much to offer yet the malaise is disappointing.
2/10

The airport barely has any staff that speak English. The gate was only announced an hour before the flight and then it was changed again. I had a 3.5 hour transit at this airport and there was nothing I could do. The airport had no wifi. The staff were very unhelpful.
9/10

"not too big or busy"

Sizewise it's not too big or busy - it is easy to access the food court and shopping etc. Toilets are very clean and tidy. Most flights depart on time as I see. Overall its good and recommended for flights to Turkey but connection options are better from Ataturk airport.
6/10

Sabiha Gökçen is the smaller of the two airports in Istanbul, still handling more than 25 Mio passengers per year. If you do like the B737-800, SAW is the place to be. Sometimes you spot a lonely A320 or Embraer on the apron, but nearly all aircraft movements at SAW are 737-800s. The airport layout is quite compact with only one terminal resulting in short ways to the check-in desks and the gates. Even if the aircraft is parked on an outside position, the bus transfer to the terminal doesn't take long - if there are stairs and busses avaliable. Things at SAW seem a bit more organised and less stressful than at Atatürk airport, but when more international flights arrive at the same time, queues at the immigration can be quite long. Also, ground service is pretty slow and sometimes you have to wait for your luggage for more than half an hour. With that in mind, allow youself some extra time if you need to change planes at SAW. Airport staff is not that helpful so you better know yourself where to go and what to do. As at Atatürk Airport, free WiFi doesn't exist. There's no train connection but several bus lines call at the airport with the frequent and resonable priced Havataş-busses being the most comfortable connection to Kadıköy or Taksim. Although SAW is not amongst my favourite airports, I still prefer it over Atatürk Airport when travelling to and from Istanbul.
6/10

"displeased with this airport"

There were nice basic amenities at this airport like the typical Starbucks and fast food and such but other than that it was not a go to spot. There was wifi there but you had to pay for it. I feel this should be a necessity in an airport. There was only one person working at the passport control for non-Turkish citizens. The common excuse was that they were understaffed but here is my argument. If you are an airline sending so many international flights, it is your responsibility and obligation to be able to fulfill the needs of the services you provide. Had these occurrences not happened to me I might not have realized how unhelpful the staff was, both airline and general airport staff. Only one out of every six staff members did I witness actually give advice to people and keep in mind I ended up being at this airport for about 12 hours. Not a good time. If everything was down to under staffing, even that is not a good enough excuse. Overall I was very displeased with this airport although most of that distaste may come from the anger I have with the airline I took. Objectively, I am sure their are worst airports but this one definitely has room for improvement.
3/10

"only two of those officers were working"

I arrived at Sabiha on a cheap flight from Budapest. Almost at the same time with our landing, two other planes landed. Naturally it got crowded, given that rather small airport. Everybody stood in the line for the passport control. There were 8 stands inside each an officer was sitting. To our astonishment, only two of those officers were working and the rest were just looking at travelers! So it took us about an hour and a half to pass the immigration. To travel to the city, you need to take a bus which takes you between 1 and 2 hours to the city center. Like Istanbul's main airport, staff at Sabiha are also not friendly or smiling at all. The last strange point was that when we were exiting the airport (exactly before the last exit door) we were asked to put our luggage through a scanner. I got surprised! I asked the security guy "why? We're leaving the airport!" "Customs" he replied.
7/10

Much quieter than IST Atatürk but closing in fast. Food options about the same, with expensive prices for local standards but decent selection. Less waiting time to take-off, which is one of the main reasons, along with it being less busy, that I prefer flying to this airport than Ataturk. Transport options decent, but the traffic to/from the airport can be horrendous as is the case with Istanbul Ataturk. This is an Istanbul-wide problem.
5/10

Overcrowded. Had to wait 1hours and 40 minutes before the flight + 15 minutes before landing because of the air traffic. This airport has only 1 landing field and it is currently under maintenance (during summer). Majority of the staff do not speak English. Long passport queues, only 5 of the available 10 counters were opened. No subway connection to the airport, you must either take the bus or use your own car. Carpark is expensive (approx. 5 euros/hour). My luggage was in the luggage band when I passed through the passport control, so I didn't have to wait.
31 to 40 of 60 Reviews