"As a woman, I constantly felt disrespected"

✅ Trip Verified | If I could give them 0 stars I would. They are rude and lack respect. As a woman, I constantly felt disrespected. They attract tourists but can’t speak basic English. They talk to you like dogs. Most of them aren’t even nice. The women are okay. It’s free to be nice. Energy never lies and you don’t need to speak any language to read that. They threw away our sand and sea shells from the Red Sea. They are extremely chauvinistic and petty. They are outdated. They make you go through two searches within 10 feet. It’s redundant. If you do a good enough job the first time you wouldn’t have to do it again. I wouldn’t suggest for people to come over here. We were made to throw away our water but we saw people who had a thermos of liquid and they drank some of it but allowed them to keep the rest. You all don’t want cell phone recording you all because you don’t want the world to see how terrible Hurghada airport and many of their people are.
1/10

"The worst was the staff"

Not Verified | The arrival was smooth, as long as you can convince the luggage pickers that a 10$ tip is more than enough for a 20 seconds walk. The departure was horrible. Countless passport checks, countless luggage scans (what is the point of doing 6 passport checks?) none of the staff were wearing masks, most of them no gloves either. That's not the worst. The worst was the staff, extremely rude, grunting, unpolite, asking for bribe (security guards asking for bribe in an airport). Even though the airport was almost empty, the whole process took 2 hours. I don't have the time to detail all the unpleasant points, but the worst was this: Just in front of the departure gate, for a Zurich flight (16/5/2021 for the 18.03 flights) there's toilets. In front of those very dirty toilets were a lady and a man. My friend was harassed at first by the woman for money, she was so annoying that she gave her her lasts 200 EGP. Then the man stood up, they surrounded her and they started asking for more money. The woman even tried to grab and steal her jacket. The whole airport crew were so rude and nasty. On the internet, you can find thousands of complaints about this airport. Thousands of stories of people missing flights cause of the negligent staff, of people getting robbed, stolen, by the very own people that are supposed to help you. The single experience of the airport can deter you to visit this area ever again. For an area that almost rely exclusively on mass tourisms, this is an utter shame.
3/10

Not Verified | Arrivals - no comments - the whole procedure was smooth, the service was OK. At departure - a nightmare: very rude and unpleasant staff, not all of the staff follow the sanitary regime related to the prevention of covid 19 (no face masks, no gloves and no disinfection), excruciatingly long checks, which basically mean little - no one really checks the passports - I went through the whole process of checking on the basis of a passport that did not belong to me (accidentally swapped with a travel companion - no one paid any attention to it). During security checks, some customs officers touch the passenger very lasciviously (especially around the thighs and butt). On the plus side: clean toilets, lots of seating places, good stocking in duty free shops (due to very pushy staff in duty free shops).

Dear passenger , I Would like first to apologize for you on behalf of hurghada international airport management about the bad experience you face at the airport and also would like to inform you that this is personal attitude from irresponsible person.Second, after investigating your complaint , the airport management has taken a lot of corrective procedures to reduce such complaints which are as follow :- 1-Helding facilitation committees with airline agents ,police department,touristic agents ,customs and all the working partners to assure and commit for all their employees wearing PPE (masks, gloves) during their duty shifts at the air port and assures also that the airport will signes sever fines for everyone who will not commit to wear PPE and will prevent him from accessing the airport entrance . 2- Increasing the number of preparation officers from aircraft/airport operators to encourage social distancing procedures for passengers and staff . 3- Spreading and increasing the number of touchless hand sanitizing station at all the airport halls specially touch point areas like check in security screening points the area where you claimed . 4- Increasing call announcement messages and making controlled timed over day every ten minutes to encourage social distancing and assure wearing PPE for passengers and employees . **Concerning the security check procedures like touching passenger very lasciviously we discuss this issues with security leaders periodically to make awareness for security stuff about the right methods to deal with passengers and emphasising using touchless machines like metal detectors and body scan machines. Finally ,we promise all passengers to keep in touch with them and trying very hard to improve our service and solving their problems as soon as possible and hoping very much to see you again at hurghada international airport very soon . Best regards Hurghada International Airport Team

✅ Trip Verified | Absolutely horrendous I would recommend everyone to stay away from this airport. You have to pass security 3x showing your passport before even reaching airport. For this reason I missed my flight even though I entered building 1hr 30 before flight. Most incompetent security with some not understanding you can have e-tickets and not letting us in building as we didn’t have paper tickets. They then took our passport for 2 hours leading us to miss our plane. This is a great city but due to this awful experience with these useless airport security coming and trying to depart I will stay away from Egypt. 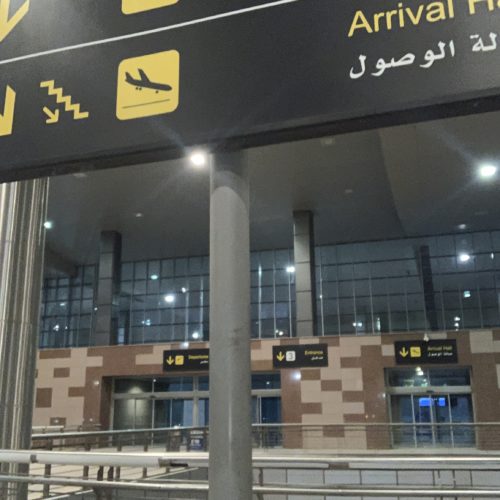 "prepare for a stressful departure"

✅ Trip Verified | Hurghada Airport is a rather modern Airport with a lot of security. So prepare for a stressful departure. You pass through security before entering the airport and through another security check if you go to the gates. Signs are everywhere, prices at the Airport are high, seating is available. Wifi does not work.
1/10

"got to be the worst airport"

Not Verified | This has got to be the worst airport in the world. It’s total chaos in both departures and arrivals. No organisation, extremely rude and unhelpful staff who have absolutely no care or consideration for stressed out travellers. The check in staff are obviously working on a commission and demanding payment for baggage already Pre paid for! I almost missed my flight despite being at the airport 3 hrs before departure, I had no time to go to the shop or even the toilet before running to get my flight. Men and women have to queue separately at one of the many screening checks, I accept and appreciate good security but their checks are outrageous! You have to be checked several times before you get to the departure gate, people were losing items and their other family members in the chaos due to the male and female queuing system and staff didn’t want to help! Our flight lost its take off slot due to the late arrival of most of the passengers stuck in security. I will certainly never be visiting Egypt again, if you go away to get some rest and relaxation this airport experience leaves a very bad lasting impression and stress levels through the roof!
9/10

"I personally love this airport"

Not Verified | I personally love this airport. Staff are very helpful and friendly. Flying with 7 of us would usually be a hassle but staff were so kind it was not. Only complaint is that they sent one of our bags on the Manchester flight and not the Gatwick flight.
2/10

Not Verified | This has to be the worst airport in the world. Security queues are ridiculous. 3 different sets of security that are seriously under staffed. The same guy viewing the scanner then stops the scanner to check suitcases causing extremely long queues. It took 2 hours to get to the lounge so arrive early! Awful attitude from passport control and security. You are made to feel like a criminal trying to escape Egypt. Rip off prices on beverages also. Real shame as most Egyptians working in tourism can't do enough for you.
2/10

❎ Not Verified | Ridiculously expensive. About double or triple UK prices. Staff are very harsh with disabled assisted passengers, security is terrible since the porters want large tips in return for VIP services. I feel the passengers must express their concern at airport prices.
1/10

We arrived at 3.45 for a flight at 6.50. I reckon this was the new airport. Building very smart. Not enough staff. Queues and queues, for x-ray, check in, x-ray, passport control. That took 2 hours, by then almost gate opening time. Food and water was extortionately priced. Do not buy. It's cheaper on the plane. Then we needed Gate 52 which was not signed properly. We were directed to the wrong gate and walked for 50 minutes trying to find our gate. The plane was late (also not signed). Long, long wait for plane including a very long time standing in a very hot bus where I drank all my very expensive water. A horrible, very horrible experience. We spent more time in queues than we did in the air. Also, rip off people in loos wanting payment for showing us where to go. Was disgusted.
11 to 20 of 25 Reviews