"very big thankyou to the team"

Not Verified | Attention Air NZ staff at departure processing 9th October. Gold Coast - Christchurch Air New Zealand NZ0278 OOL - CHC - 18A, 18B A very big thankyou to the team for getting us home. My wife Pauline found she had lost her passport as we were booking in. We were resigned to missing our flight, but staff showed such wonderful determination and commitment in helping us through this crisis and spent such a long protracted lengthy time on the phone resolving our issue, we have only the highest of praise for her and her staff. Heartfelt thanks to you all from two very grateful Kiwis!
3/10

Not Verified | I don't have too many complaints about the airport in general, as everything ran relatively smoothly, but the man checking declaration slips was possibly the rudest customs officer I have encountered in all my years of traveling. Extremely grumpy, bossy, and pushy... didn't greet, just gave us a quick look over and then crankily ushered us off to the baggage inspection area as though we were cattle. It wasn't busy at all at the time so there was no pressure to hurry anything up. The other staff were civil and professional so I am reluctant to be too harsh but that one guy really needs to fix his attitude.
1/10

Not Verified | Terrible airport. Cramming travellers together during covid pandemic when lounges for three Gates remained sectioned off. Stay clear unless you want to catch the 'rona'. 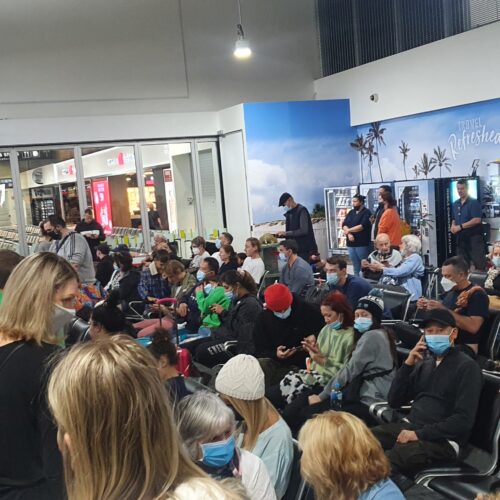 Not Verified | The queues for taxis are about 20 groups long and a taxi arrives every few minutes, getting the picture. UBERs are $25 for $10 fare & 13 mins away. Flight was delayed, over an hour. Trek from plane arrival gate to luggage collection is a 10 mins or more walk. Everything is shut at 8.30pm. Air travel is now a nightmare in this country. Customers are truly treated like cattle. Services in Indonesia are a million times better. Tragic what is happening here. Tourism may never flourish again. Who cares? Not Gold Coast airport management that's for sure!
3/10

"What a disaster of a system Gold Coast airport is"

✅ Trip Verified | What a disaster of a system Gold Coast airport is. They have reverted to full body screening and only have 3 ports open to try screen 5 planes leaving at 1 time. Don't fly from this airport if you can avoid it. Go to Byron or Brisbane as it will save you 2 hours of heartache in the screening queues which go all the way back to the Virgin check in. Staff walking around on their phones and about 10 people standing at the screening points with their eyes painted on.
1/10

"would use Brisbane or Byron instead"

Not Verified | You will collect your luggage and get through immmagration at most major international airports quicker than you will get your luggage from a domestic flight at this airport. Happens every time without fail. Depending where I am going would use Brisbane or Byron instead if at all possible.
7/10

"airport was small and navigable"

✅ Trip Verified | Landing was easy. The airport was small and navigable. Accessing the 700 line double-decker bus to Broadbeach (the light rail begins in Broadbeach) was easy, though it'd make sense for the Gold Coast Council to extend light rail all the way to the airport. The terminal and restrooms were clean. I'll be honest and say that I've only ever arrived into Gold Coast, never departed (that was from Brisbane), but I had no real qualms with this airport. I do remember it taking a little longer than usual to retrieve my baggage from the carousel, and the WiFi being slow (it is Australia, after all).
3/10

Not Verified | Extremely disappointed. Staff didn’t put a seal for the liquor I bought. During the transfer security check-in in Malaysia, they didn’t allow me to take it any further. I had to give it up. The staff did scan my ID and boarding pass but they didn’t cover it with the seal - make sure you get it sealed.
9/10

Not Verified | The airport was nice. A couple of Duty-free shops and good food places to eat at, nice viewing windows while your eating and a lot of great decor. Could do with some more shops and possibly some lounges although it's a bit too small.
3/10

"do not believe that we should be penalised"

Not Verified | On the 23rd of June this year I was picking up my Son and his Wife who had just returned from Sydney. The arrival parking bays at the far northern end of the terminal were completely full, there were cars in front of our vehicle as well, that were not moving. To help the situation my Son and his Wife jumped into the car, they only had one small backpack each so no big suitcases to put in the boot etc (it was literally a few seconds and they were in the car), we had just started to take off and a man in a bright coloured vest ran in front of the car and took a photo of the front of our car (His actions would have held up the traffic behind us). We wound down a window and nicely asked what was going on (with no bad tone of voice whatsoever) he replied with a very rude tone and manner "That will be a $126.00 fine and you will get it in the mail. We said, still calmly "What!, It was so banked up with cars we couldn't do anything else". He once again was extremely rude and said, "Oh yeh was it now". This happened approximately at 1.29 pm. Is this the type of employees that you want to be ambassadors for the Gold Coast? If I was a visitor it certainly would leave a bad taste in my mouth for the Gold Coast! We in no way hindered people being picked up as the arrival bay was still full and no cars were leaving it. We actually helped the situation allowing other cars behind us to come into the arrival area after we left. We do not believe that we should be penalised and pay $126.00 due to an extremely rude parking attendant who picks people at random to fine.
1 to 10 of 51 Reviews