Not Verified | Awful waits and crammed, put too many people in one bus where people were squished to the sides. My bag was small enough to carry on and they had me check it when I got on the plane even though there were bags twice the size of mine being let through. Do not recommend, take a train.
2/10

Not Verified | We thankfully arrived almost 3 hrs early, to utter chaos. Hundreds of people, all siphoned thru 1 set of doors into a worse area of security. What a circus, 1 belt to push luggage thru. Took personal items items out of clear plastic baggies to put into a different clear plastic bag, for what?! Waste of time. So poorly designed. Arrive 3-4 hours early to get thru this mess. Also filthy dirty, small piles of dirt and garbage in the corners. Barely made our flight. Need an intercom system as well!! To call flights, final boarding etc. even the restaurants are minimal & super slow. If you can avoid, do so. Go to London if possible. Nightmare that compares to the airport chaos in India, except India is clean. So stressful. Entire airport needs a redesign. And a mop. 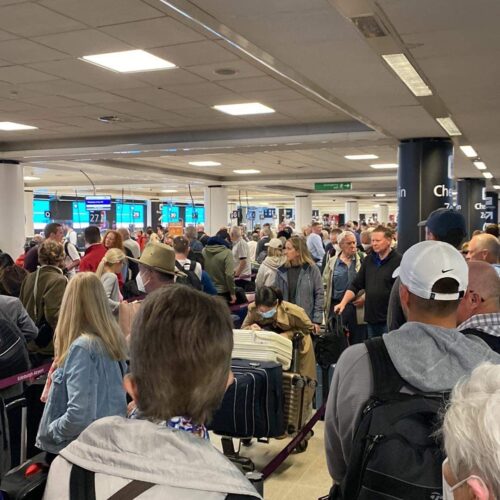 Not Verified | Airport is utterly filthy. Everything broken, toilets stink and unclean, soap and paper empty. Staff are bad tempered, ignorant, and slow. Try and fly Glasgow if you can, it's a much better airport!
1/10

"wait in excess of 1 hour to get our bags"

Not Verified | Once again we find that we have to wait in excess of 1 hour to get our bags. This is certainly nothing to do with Covid as pre-pandemic we experienced the same poor standards from the baggage handlers. This puts us off flying to Edinburgh Airport We are frequent flyers that go away 9 times per annum.
2/10

"No ground staff to be seen"

✅ Trip Verified | Arrived on a delayed KLM flight from Amsterdam. Left the aircraft onto a jet bridge, routing us downstairs. No mention of the dreaded bus transfers in advance from the cabin crew, but it’s Edinburgh Airport, you knew it was coming right? This time they decided to have a wee laugh with us at 12.20am, by initially pretending we were going to use the jet bridge. We walked down the steps and corridor taking us downstairs to the apron. It looked like it had recently been taken back from the rebels during the Scottish War of Independence, and, now safely back in Government control, they had decided to quickly get flights going again rather than bothering with any repairs. Missing, open ceiling panels, peeling paint, cables hanging down in the voids. The American tourists from our flight looked confused. Someone had clearly told them that Scotland was a modern, Western European country. Yet, somehow, they’d landed in an airport that the authorities in Entebbe, circa 1973, might have considered marginal for use. Access to the apron outside after the wrecked corridor was achieved by some grubby, wet steps but these were mysteriously barriered off. No ground staff to be seen. We looked out on our plane as it glistened in the light. Now feeling like a collective passenger team, and with a rising fear for our wellbeing, we mounted an escape plan, returning up the strafed corridor again to the jet bridge. Naturally, the access door to the terminal on the main jet bridge was also locked. There were still passengers stuck on the plane at this point due to the lack of space on the jet bridge and in the corridor. Over 10 minutes had passed. The Americans looked panicked. What was happening? What did it all mean? We Scots, knowing Edinburgh Airport of old, tried to reassure them. It’s not a kidnap plan fellow travellers, it’s just the usual epic, spectacular, never ending abject incompetence and bungling that Edinburgh Airport prides itself upon. Suddenly a man appeared on the jet bridge in a reassuring hi vis vest and lanyard. While clearly off sick during initial customer service training, (a common problem at Edinburgh Airport), he mumbled something about buses and going back down the pummelled corridor to the buses. This time the barrier had gone and we saw the buses about 20 feet from the slippy steps. Most appeared to make it down and into the buses alive. The passengers left on the plane slowly trooped off and down to the buses. More time passed. By this time we were 25 minutes in and still at the gate. The buses grew more and more packed as people boarded. I idly remembered that I really still need to lose the lockdown weight this time, as I was squashed into a corner. Suddenly the bus doors closed and we moved off. After a few minutes we pulled up on a strange prefab cattle shed. It turns out that this is Edinburgh International Arrivals Hall. I’ve capitalised it to reflect the full splendour of the facility. A bit of an issue that arriving passengers are dropped off the bus into a narrow walkway and puddle. Is any surface actually level in this airport? There was initial confusion. Is this international arrivals? A narrow doorway into a cattle shed? Yes, indeedy. We made our way in, buckets on the floor catching the drips from the leaking roof. We approached the UK Border apprehensively, wondering if we might yet be home before sunrise. They were quick and efficient in fairness. We made our escape from Entebbe again, hopefully never to return.
1/10

"Edinburgh security are a disgrace"

✅ Trip Verified | I've travelled the world and Edinburgh security are a disgrace. After opting out of the scanner for health reasons, the supervisor got in my face like he was a hard nut. Unprofessional and unhinged; a danger to the public. Abysmal and embarrassing, Edinburgh.
2/10

"Incompetent would be a polite word"

Not Verified | What can I say without being rude. Incompetent would be a polite word. Baggage drop was abysmal with passengers luggage strewn around the drop off point waiting to be loaded onto the carousels. The handlers are so far behind that all flights have been delayed to give them a chance to load. My flight has, at the moment, 2 hr delay. The flight is only 1.25 hrs and 40 passengers. The terminal doesn’t have enough seats and as far as I can figure - no AC. Red alert heat warning and here we sit perspiring and expiring. If you choose to use this airport and I would advise against, and your journey goes badly, and it will, you have only yourself to blame. 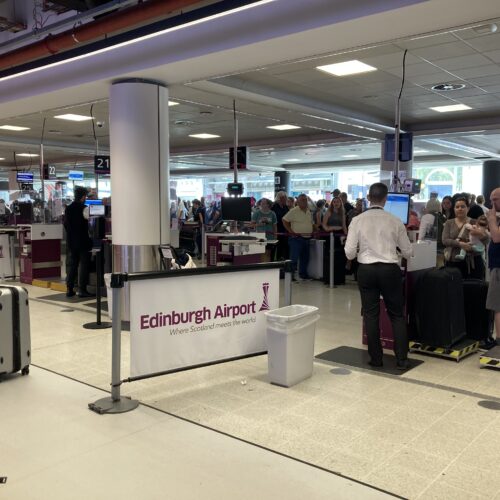 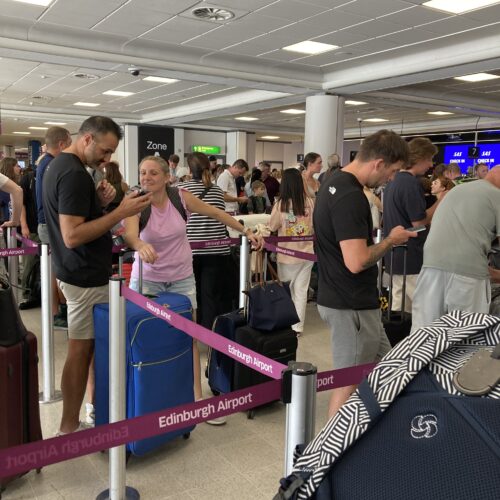 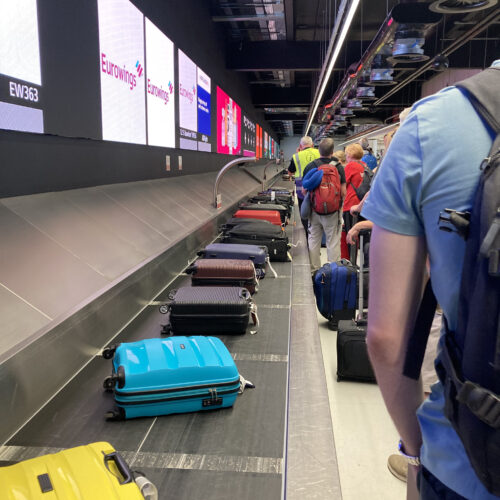 Not Verified | Left Edinburgh on 16th July, experience ok at check in and security. Long queue for all bar one for breakfast but that was ok. However when we arrived in Alicante all 5 of our cases had been left behind in Edinburgh, terrible start to holiday nothing other than the clothes on our back. No one to speak with, just have to sit and check for emails and tracking being updated.
3/10

Not Verified | I had the massive misfortune of finding myself in the chaos that was Edinburgh airport on the 4/7/22 to catch a 06.30 flight. I was trying to get through security and was attempting to put my boarding pass through security, but I couldn’t seem to get it to work. I was aware that there was a queue building up behind me and people were getting impatient with me. I tried getting the attention of x 2 security staff who were chatting to each other, I felt I had no choice but to try to get to them. I tried saying “excuse me” but they were still chatting. I crossed under a barrier to the side of me, I was not trying to push in or get some kind of advantage by doing so but one of the security guys suddenly noticed me and shouted “what do you think you’re doing” I tried explaining what I was doing when he said “watch your attitude don’t speak to me like that” I again tried explaining the situation but every time I tried to speak he would just say “no” with his fingers I front of his mouth. There was obviously a it of people about and I felt humiliated and belittled. I am a nurse and would never dream of speaking to anyone In this manner. I regret not asking for his name, but rest assured I will never travel from Edinburgh airport again. Appalling customer service.
3/10

✅ Trip Verified | I use Edinburgh airport a 5 or 6 times a year and in general don't find them any better or worse than any other. My problem was my recent arrival on Ryanair FR6622 from Tenerife. My wife and I tend to sit in the extra leg room over the wings which means we are one of the last people of the plane. On this flight we were being bused to the terminal and both coaches were absolutely rammed, and this guy was insisting we get on even although people were standing in the doorway. Eventually we managed to get on carrying 2 bags, I could not get my mask on and no one else was wearing one. Being in my 70s I avoid crowded spaces, 3 days later I find I have covid the only place I can think I could have caught it is that bus. Thanks Edinburgh Airport for your social distancing policy.
1 to 10 of 513 Reviews