" No training on how to clean"

Not Verified | Poor signage. Everyone shows up to south security. The other two security check points almost empty. Bathrooms look worse than a truck stop. Cleaning staff, used towel to clean toilet no sanitizer, used same towel to clean sink, mirror, shelf, towel dispenser! No training on how to clean! Most people leaving bathroom with out washing hands! No wonder why everyone getting sick!
1/10

"This is an airport I will purposely avoid"

Not Verified | Arrived 5 min early. Went thru security in 3 min with global entry then waited over 1 hr for bag. I had priority service as a close connection. United 3 staff at 11.30 am were lazy, terrible, and not assisting at the baggage carousel. The one agent ripped my tag off my bag, said run to your gate and from there on a nightmare. No assistance. The bags were to be on carousel 3 from Costa Rica then 2. Japan Airlines arrived 15 min after us and bags were off loaded. Shame on United Airlines. Went thru tsa again as international security and tsa not the same in Denver. No direct connections for international passengers transiting thru. Waste of money and intelligence really. Tsa agent took my 100 ml Jam as they don’t understand its less than 3 ounces. World uses metric, come on Denver, get educated. I gave it up. Tsa agent dished me from the tsa line as one of my boarding passes said tsa approved and the other didn’t have the stamp. So, sent me to the end of the other line. She knew I had 15 min. Another volunteer staff, assisted me and brought me thru to the front of the line. Those who have nexus, global entry should already be pre tsa approved. This is an airport I will purposely avoid. I ran past 50 gates, no assistance from tsa or United and missed the flight by 5 min. Went to the United assistance and explained what happened. The very seasoned agent, said, she knows the system here is awful and gave me a ticket on the next flight. Rating 1/10. Very poor.
1/10

"airport should be avoided"

✅ Trip Verified | Terrible customer service: I was ahead of almost 2 hours and tried to print the boarding pass. But the system was down, and I asked some customer service help, but their response was too rude to hear. I was in line for more than one and a half hours that made me late. So, I bought another new ticket (United Airline). I want to recommend all employees should be trained well, especially their mouth and eye, as well as they should know what their job is. They should not look down the customer/guest as a terrible enemy and a valueless animal. If possible, that airport should be avoided.
1/10

"one of the worst airports in the country"

Not Verified | Denver airport is one of the worst airports in the country. It takes forever to get from the rental car agency to your departure gate. Security lines and wait is terrible. I will avoid this airport as much as possible in the future.
5/10

"friendliness is a real issue"

Not Verified | On a recent flight, leaving from the regional airline area in terminal A, there is no walkway or any service for the ones of us that have a hard time walking. Wheel chairs were available, but no directions on how to acquire one, and no visible interest in assisting older or infirm people. Denver friendliness is a real issue. I have been through the airport several time times this past year, 2019, and have found many of the service employees are never available. I strongly recommend that if you can change planes somewhere else, try to do that.
2/10

✅ Trip Verified | Dirty and dingy feeling. Nasty smelling. Signage horribly placed and sometimes misleading - worst I've ever seen in an airport, I think. The wonderful light rail station shouldn't be hard to find, but this airport makes it hard to find. The baggage carousels take inordinately long to deliver the luggage. Unclean restrooms. Disgusting seats from the moment you check in with your airline to the moment you leave your gate. Gruff and mannerless TSA agents, even by TSA standards (then again, it is Colorado, which is arguably one of the U.S.' least friendly states). Even TSA Pre-Check passengers wait longer than in Pre-Check lines in other airports, I can also attest to how terrible the lines at DIA are for non-Pre-Check holders. Boring and unoriginal options for snacks, dining and drinks for such a large airport. At least the inter-terminal tram is clean, efficient and dependable, and, as I said, that light rail station is such a nice asset. Friends don't let friends fly in and out of Denver, y'all. I've never liked this airport, but my most recent experience really did me in with it.
2/10

"getting frustrated with the lack of service"

Not Verified | We are really getting frustrated with the lack of service and having things work they way they should at DIA. I understand things can go wrong but today, all of the following happened: 1) Escalator stopped when going down. Small girl was thrown to the ground and was hurt. 2) Got on train to go to baggage - did not go anywhere. After 10 minutes - we had to walk to baggage claim. 3) Waiting for baggage - when it finally started to come out- it got stuck and took someone 10 minutes to fix. Get your act together.
3/10

"train the officers to be better"

✅ Trip Verified | Unfortunately, I encountered traffic on the way to the Denver Airport to catch my departure flight home. I got there later than desired, but was still going to make my flight. However, as I was going through the Tsa screening (I had my stuff on the belt, next in line to go through security), my lane and a handful of others stopped operating. This was around 5:00pm on 10/18/2019 The TSA officers made no attempt to explain to the people in line what was going on. Instead, the officers in my lane kept laughing and cracking jokes about "the supervisors not doing their job". They should be more sensitive and considerate of all the anxious people waiting to get to their flights. One guest in the lane next to mine remarked that his plane was leaving soon and he might miss his flight, to which the officer sarcastically replied, "That's unfortunate." without even giving the guest a glance. Another guests 2 kids had passed through the security gate right before the machines stopped, so he approached the officer after about 10 min and asked if the kids could come back through to stand in line with the parents so they wouldn't be waiting alone. The same officer mentioned above replied in an aggressive manner that "they've been randomly selected and they'll be selected again when they come back in." What he's saying is not wrong. It's how he said it that rubbed me, and undoubtedly the father, the wrong way. You could tell the father was annoyed because he simply didn't want his kids to be alone. My negative experience was mainly due to 1 or 2 officers, but there is obviously a work culture that tolerates this kind of behavior. There were other officers around that said nothing to correct the abovementioned officer's rude behavior. I have traveled a lot in my life, and can deal with a bit of rudeness, but this was over the top. Please, train the officers to be better people, which in turn will make them better employees. The Denver Airport processes many, many people each day, and bad employee behavior should not be an impediment. 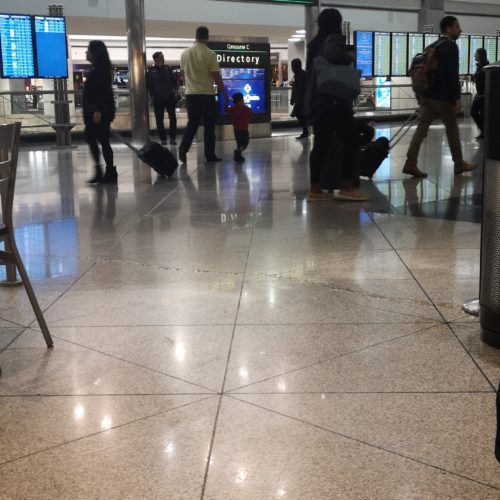 Not Verified | I have travelled in Denver over 15 times per month on average (since this airport was built). It’s the worst run airport I have been through. Escalators are broken consistently (perhaps 1/5 trips I make), bulbs are out in the elevators, and to make matters worse the major construction to shift security upstairs (complete remodel) has come to a halt. The contractors were recently terminated. Currently the terminal looks like it’s been through a demolition. On a good note the train that runs from Denver works well. On a bad note even the long term parking is expensive ($18 per day) and the shuttle buses run infrequently. This airport is run by the city of Denver.
1/10

"Why do the folks from Colorado tolerate this!"

✅ Trip Verified | Terrible experience! First, getting thru security was a nightmare because a screener was being trained. They discussed every bag! No attempt was made or any consideration given to travelers missing their flight. Second, no gate information is available until you get to terminal a, b, or c. So that is not helpful when United flies out of more than one terminal. I had to take a second train ride. Third, I had to use terminal b. It has 95 gates! And guess which gates are at the end? Local flights. What a way to treat guests coming to spend money in this state. Why the taxpayers put up with that I will never know. I don’t understand how voters put up with that. Last, United treats their customers like crap with broken down planes, gate changes, delays, outrageously bad customer service. Why do the folks from Colorado tolerate this!
11 to 20 of 131 Reviews