✅ Trip Verified | Arrived on 27/9. Queues for everything. Delays not too long however. At passport control the official never looked at me, his head resting on one hand he waved me off dismissively with the back of the other. No check on passport. Departing was a whole different scenario. Arriving at the airport we found approx. 6 queues outside on the pavements. We were instructed by a holiday rep., to join one. After 30 mins., waiting in the sun we were directed into the check in area. I could then see why we were left outside. There was no way the hall could have held all the people waiting outside. Another queue of 20 minutes to check in. We were then directed to security, not difficult to find, it was right behind us and stretched for 30 yards ahead, approx., 10 people wide. We were constantly told by staff to 'Move up, move up' There was no place to go. The same staff constantly came into the queue shouting 'Make way, make way' as they led people with mobility issues or with small children through the queue to the front. Eventually we reached the front after 25 minutes of shuffling forward, herded together like animals. Staff were asking to look at boarding cards and passports before passing through the screening process. I offered mine, the staff member looked away, and I received the same backhand wave as I had at Immigration on the way in to the Country. I was motioned forward to go through the scan. Someone shouted at me from the adjacent scanning position, took my passport and boarding card, threw it into one of their plastic tubs and placed it on their conveyor. I now had my belongings going through two separate scanners. Into the departure area, utter bedlam. Totally overcrowded, No seats. Not at all easy to get information from screens. Once again queues for absolutely everything. Stood for 90 minutes before being called to board. Luckily? Our flight was delayed by just over an hour. Otherwise I am sure it would have left without us. As we were boarding I overheard someone say that they had found seating on an upper level. No signs anywhere to say so. Toilets were indicated by an arrow a scrap of paper (one only) stuck to a pillar. An absolute nightmare!
8/10

Not Verified | This is a small airport which you should expect for the size of the island. Staff are always helpful. The airport is currently undergoing major refurbishment which does impact on the available services.
2/10

"This facility is appalling"

Not Verified | This facility is appalling, a lack of ‘everything' from seating upwards, and the prices for tea/coffee soft drinks and basic food is extremely high. When you find somewhere to sit you probably won’t be able to see departure boards as there didn’t seem to be many.. As a BA club traveller on this occasion, a BA dedicated lounge would have been nice.
7/10

"we have nothing negative to report"

Not Verified | We were worried about what we would find, especially coming home but our experience was possibly the best in the last 26 years of using this airport. We arrived on 2nd September, on time with Jet2, and were quickly through security/baggage reclaim. We asked our holiday villa rep how things had been and she pulled a face, said it had been up and down. We arrived on 9th September to fly home, allowing an extra half hour, but found the check in (luggage taken from us there - not another desk) to be speedy and the security line to be fast moving. Once through into the departure lounge, we saw a great improvement in the former cattle truck conditions. More seating and an upstairs snack bar. New toilets throughout - spotless - and I never thought that I would say that. Perhaps we just hit it on a good day but we have nothing negative to report. Departure on time - thanks Jet2 - and arrived early at our destination.
1/10

"staff don’t know what they are doing"

Not Verified | It used to be simple to travel through this airport, but since it has been taken over the car park has moved and the chaos that ensued inside is an absolute disgrace. The staff don’t know what they are doing, the management do not have enough staff on duty and there are no effective systems and processes to manage the flow of people. Security was a joke - having queued for 2 hours to get the bags in we then had to queue again for security and then again for passport control - you will need at least 3 to 4 hours to get your plane on time. Photo shows queue for security. 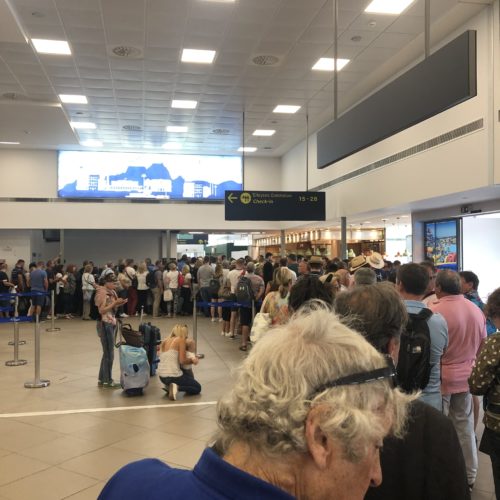 Not Verified | Horrific! Surly staff yelling like its a concentration camp, pulled my bag apart. Pushed infront of me as I bent down to collect my belongings. Will never come here again after airport treatment.
10/10

Not Verified | Read lots of reviews night before we flew home and was really worried bout how the experience was going to be. Need not have worried. From getting off our coach it took 15 mins to be checked in and through security and waiting at the gates. Pleasant experience on arrival and departure. Well done.
1/10

Not Verified | The security staff were extremely rude. I am flying twice a week internationally from airport that are known to be very strict from a security point of view and I have never been treated like this. Although I have done my best to have to determine what are the rules and saw they need to see our boarding cards and passports before they scan anything. When I showed them my boarding card and passport I was told no they don’t want to see it and then seconds later got told off for not showing it. My husband forgot his mobile in his pocket and took it out before the body scan. The absolute annoyance was clearly visible on security’s face. I do appreciate they do it for our safety and that is why I always go above and beyond to do as told, but then don’t be rude to my family or to me.
1/10

"What a complete fiasco this airport is"

Not Verified | What a complete fiasco this airport is. We had to use this airport as we were joining and leaving a Marella cruise ship at this location. 3 hours queing including 1 hour standing in the parking area, from being dropped off by our transfer coach to get to the boarding gate which was loading by the time we got there. (Didn't even get to use a toilet because of the chaos). No seating for the elderly / disabled. Looking around the place, I am doubtful that it even complies with EU safety regulations. In the event of an emergency situation, this airport is a disaster waiting for somewhere to happen. To the Greek Tourism Minister I would say - Why are you allowing such an appalling situation to continue, when tourism is the life blood of the Greek economy? In conclusion I will say that in over 40 years of using airports around the world (including some so called 3rd world states) this is my worst airport experience ever. I most certainly will never return to Corfu in the future nor will I choose to join a cruise ship based there - Cruise Companies and Greek Tourism Authority please take note!
1/10

Not Verified | Absolute nightmare. Hour and half to get through security and passport control. Almost missed flight. 2 passport control officers for hundreds of people. Get there well ahead of time. Staff are useless.
1 to 10 of 108 Reviews