✅ Trip Verified | The airport is clean and not large. Signposts are clear. Passengers can get around easily. Employees are friendly and helpful. Security check is efficient. The prices charged at food outlets are reasonable.
2/10

"the most inefficient and waste of time and money"

✅ Trip Verified | Probably the most inefficient and waste of time and money with double security screening. Before entering the terminal you are required to screen both check-in and carry on luggage and backpacks. Taking out laptops/tables and mobile phones as if you are about to board the plane. Then after getting your boarding pass you have to go through another security screening exactly like the first one when entering the terminal. Don’t really understand the reason the need for the first security check if they have the exact same one before boarding.
2/10

Not Verified | Worst airport and employees ever! Not one person working here spoke to me. Just hand motions that I’m apparently supposed to understand. My friend and I were the only two people in line to check in, and noticed the service counter woman mix up our boarding passes and luggage tags. She informed us of the mix up, and when I told her that was ridiculous and to please fix the tags - she acted as though it was an inconvenience to do her job correctly. Thank goodness she didn’t have a full line of people behind us to screw their stuff up too! Not one person we interacted with at this airport was friendly, helpful, or competent. Avoid this airport at all costs if you can.
3/10

✅ Trip Verified | Worst airport ever. Arrived for a 1.20pm flight to Hanoi. Have flown domestically out of Chiang Mai a dozen times. Assumed there would be a similar level of food outlets in international as domestic. There is nothing. You can buy 2 minute noodles and a soft drink. No restaurant, no fast food, no bar. Travelling with a hungry, cranky child.
1/10

✅ Trip Verified | The most unprofessional, inadequate and arbitrary luggage check ever. We were shocked about the way we (and our belongings) were treated when we entered the airport for the first (and overall pointless) check-up. They were focused on batteries and power banks that they unpacked aggressively my whole luggage which I've put before neatly in my bag. I asked them to handle at least a bag with some glass bottles containing my medicine with care but I just got ignored. Then they scanned every bag and some single items they took out of my bag again. They just threw my belongings rudely in a tray. It took my partner and me quite a while to sort this mess out. Thankfully we weren't in a rush. As a criminologist, I'm aware of certain (none-EU) security standards but this action was completely inappropriate and a waste of time. Especially as I could have brought easily a bottle of nitroglycerin with me - no one would have known. Amateurs! Furthermore, food and drinks are even for an airport overpriced. They charged more for a coffee than in London - ridiculous!
2/10

"a less than rewarding experience"

Not Verified | Chaotic, lack of facilities and no departure board all make for a less than rewarding experience. Incomprehensible announcements and general chaos. No soap in toilets. No ATM or decent food - avoid this airport if you can.
6/10

"not a lot of food options after security"

✅ Trip Verified | Left Chiang Mai for Bangkok. All bags are security screened prior to entering the airport which meant a bit of a line outside in the sun. I get the security behind it but it was a pain in the butt. There was a lot of space at the check in counter and security moved well. We had all of our water taken away at security but there is filtered water near the departure gates. There is not a lot of food options after security. A few coffee shops and news stands. Boarding area was not too big for the number of passengers going through the area.
8/10

❎ Not Verified | Upon arrival in Chiang Mai, we had to take the bus to the terminal, which thankfully was a quick trip. Customs was fast and the baggage claim was easy. Even as a small airport, there were friendly and helpful employees. It was easy to get around, especially finding taxis. I would prefer Chiang Mai over Bangkok airport, and I will continue to go to this airport.
1/10

"worst airport I have visited"

✅ Trip Verified | This is the worst airport I have ever visited - and I have visited many. All flights were cancelled on New Year's Eve - yet foreigners were not contacted to inform of the cancellations of their flights. Both the airlines and airport continued to show flights scheduled long after the airport had been closed (see attached). There were no airline staff in the airport and the information staff were beyond useless, leaving people stranded in the airport overnight, many losing a lot of money on connecting flights. The information staff refused to help and even refused to let people use the phones. We were not offered so much as a glass of water. People from Germany, the USA, the UK were simply told "come back tomorrow". When I asked to speak to a manager, a very rude and unpleasant female member of staff on the information desk told me: "You can speak to the police" and called airport security police. Meanwhile the security personnel were lying about on the floor and across seats. Until this point we have received no compensation for the cancelled flights, nor any apology. Since I have now discovered that Chiang Mai airport frequently closes at times of celebration, citing the reason that planes cannot take off when there are fireworks/lanterns, I strongly suggest you do not go there. They have no respect for foreigners, and are simply interested in taking our cash. 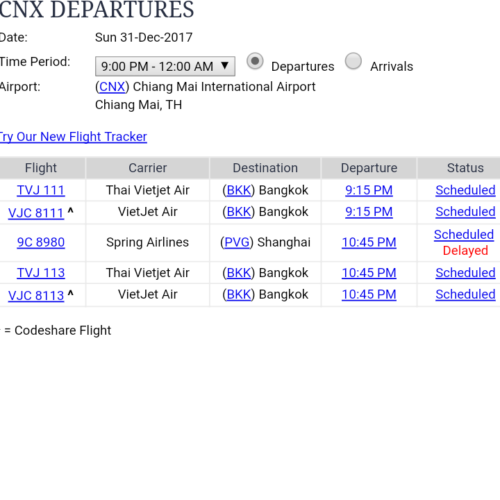 ✅ Verified Review | This was one of my favorite airports in Thailand (also helps that Chiang Mai is just such a beautiful place). The airport was clean and super easy to navigate, had a good selection of places to buy things from and when arriving we got a great cheap price on a taxi. Unlike Bangkok, we were not asked for an outrageous price to get to our hotel, it was a simple 150 baht to get across town (about $4.50 USD). Very organized, I'd go back anytime!
1 to 10 of 43 Reviews