"the crowd keeps piling up"

✅ Trip Verified | Extremely crowded at Security Check. CISF Staff at the airport who are responsible to do security check are totally unconcerned about the long queue and waiting passengers and do all their work so slow that the crowd keeps piling up. 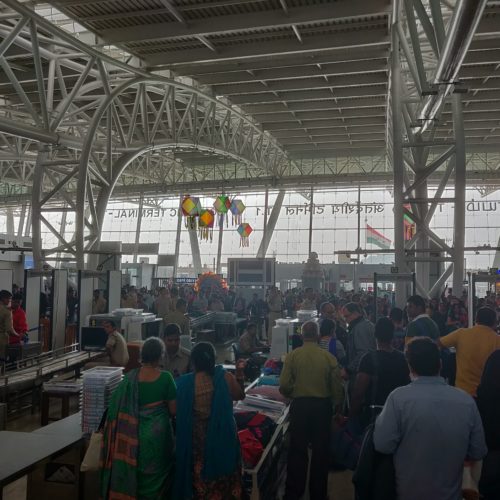 ✅ Trip Verified | Hopeless airport for people who are in transit. There is no proper service to move from domestic to international and from international to domestic. People will face a tough time because it is approx 2 kms between them. Trolleys are not allowed, so people with many pieces of luggage will have an impossible time. Your only option is battery car that is again hard to catch. All the best if you happen to land in this airport, of course it wouldn't be a happy journey once you arrive at this airport!
4/10

Not Verified | I transited in Chennai on our flight from Colombo to New Delhi on AI 043. The transit facilities were a complete mess and were reminiscent of the way thing were done in India in the 1970's. As we deplaned there was no dedicated signage for transit passengers. Airline staff were shouting down the corridor asking transit passengers to various destinations to form up on either the left or right of the corridor. We were all, including aged passengers then led at a fast pace to a point where we emerged at a point leading to the security check area for passengers starting their journey in Chennai. This is totally ridiculous as all transit passengers had already been security checked at their originating airports. The X-ray belts are very short and given the number of passengers the queues were taking very long to be security checked, as a result of which the belt out of the X-ray machines were jammed with baggage waiting to be picked up by pAssengers who were waiting to be body searched. All in all a painful experience for passengers and staff. There should be a way for transit passengers to be taken directly to the departure gates.
1/10

"there was no proper signage"

Not Verified | Signage at the immigration area was a disaster on my last trip. The airport was divided into 3 sections OCI holders/Indian Passport Holders, Foriegners, E-Visa Holders. The queues for the latter two sections were super long and there was no proper signage. People kept going between queues, unsure of which one they should be in. There was only one person manning the snaking queues for the foreigners. And he selectively advised people where to go. At the end many people spent an hour waited in the wrong queue only to be told to join another queue at the end of it. Confusion was one thing. The manners of the immigration officers were non-existent. The officer at my queue was bullying a bunch of Korean passengers who seemed to be in Chennai on a work trip from Hyundai. He screamed and yelled in English so loudly at every one of them knowing that they couldn’t understand him. That alone took an 15 mins. I also noticed that he was asking everyone for additional information not asked for on the immigration card, as if we were supposed to have put it in and didn’t. He sent a few people to the immigration office after much scrutiny on their visa and passports and company letters for further checking. But when it was the turn of the boss, a westerner, of those people he sent for further checking at the special office came up, he let him go. But this time with his voice toned down by several notches. Mind you those folks had already waited for an hour in line. Every one in that group had the same documents. They all obviously came for the same meeting. My treatment was no exception. But because I have been traveling to Chennai for over a decade and at high frequency for work. He couldn’t scrutinize my documents too much. Still he asked for local contact name and number. And asked me 3 times where I worked and what our company did. I could tell he had no clue what I was saying - technology is beyond him. But he had to ask over and over again anyways. I breezed through in 5 mins. The luckiest one on the queue. The worst experience I’ve had. If I was a tourist, I would never come back here again just because of the treatment by the immigration.
6/10

"immigration officers could be a bit kinder"

Not Verified | I have been visiting Chennai over many years and have noticed the significant improvement in the service and airport building. However, as a tourist coming on holiday I believe immigration officers could be a bit kinder. On my visit this year the immigration officer chucked my passport in my face as my form was not filled out with the correct ink colour. There was no need to act like that. When I went to Kerala their immigration was very friendly and welcoming which I think encourages more tourism.
2/10

"it is quite a shoddy affair"

✅ Trip Verified | Considering this airport is 'newly built' it is quite a shoddy affair. Firstly you have to be checked by security right outside the main door, first bottle neck. Then again you go through another security doing the same. Poor building and very poorly trained staff in immigration and bottle necked check in and security. All of this could easily be ironed out as there are acres of space. The atmosphere is unwelcoming and the tannoy system is inaudible or not working. By the time you're in International Departures you are back in the old building with a facelift. New tiles. I tried the drinking water fountain - regular water - has brown flecks and pieces in it! The whole place has has millions spent yet so little to show for it!
1/10

Not Verified | The worst airport I ever see. Cleanliness poor. Extremely slow immigration queue. Security scanning is by sex. Female section is the worst. I nearly waited two hours. The ladies doing scanning are lazy. Very slow airport. The experience was stressful and a total disaster. I wont visit again in my life.
5/10

"arrival is below average"

❎ Not Verified | This airport needs to make better use for the amount of space they have. It is better than the previous terminal, but still needs some development. Why not have carpets instead of tiles in the waiting area? The arrival environment has always been a drawback to this airport. The baggage belts need to be changed because it gives a very old look. The authorities need to install better lighting in the arrival lobby and improve the ambiance of the arrival, then only the people will have a good feeling when arrived at Chennai. Overall, departure is above average and the arrival is below average. I hope there will be further development of this airport.
5/10

❎ Not Verified | International arrivals often require long walk to immigration. Extremely slow immigration queue, more than 1.5 hours to get processed, despite having applied in advance for an E-Tourist Visa. The benefit was bags were on the belt waiting. Had to have an x-ray of bags before getting to arrivals hall. Money change in baggage reclaim and also in arrivals. Limited toilet facilities. Domestic departures very bureaucratic, you have to show paper copy of E-ticket and passport before getting into the terminal. Next you have to have your suitcase scanned, security banded (separate queue) and then you can actually check-in. Security is confusing with scanner a long way from the scanning units which are done by sex. Boarding pass needs to get a stamp during the scanning process and then departures. Two small food courts one at each end. Air bridges to most aircraft with 4 bus gates downstairs. No announcements so need to watch screens for any changes etc.
7/10

"it has been face lifted quite well"

❎ Not Verified | I have been using MAA since 1994 intermittently. I was in for a pleasant surprise this time. While I heard Delhi and HYD have improved, was always concerned about chennai that it was lagging. Recently, things have taken a turn in the right direction. The airport looks classy in and out. While some cultural issues like restroom floors being wet always remains a matter of concern, overall it has been face lifted quite well. The site from GST flyover looks amazing with lights. The approach has always been easy and good, continues to be so. Relatively a small but not less busy compared to the other big 3s in India.
21 to 30 of 111 Reviews