Not Verified | Careless security checkup in this airport. They have no responsibility on passengers. Security checking system is worst I have ever seen. I was unable to found my moneybag but security police was laughing at this situation. Airport authority need necessary steps to control these situations because passengers are bound to travel by air and hope for better services so if this situation is going on passengers will be fully exhausted.
7/10

Not Verified | The main problem with this airport is the fact most international flights from the Middle East and Europe arrive and depart around 3 am or so. It is thus very likely you can get ripped off by taxi drivers at night. And many hotel desks do not work at that time. Hiring a car is never an option if you are not used to Indian rules of the road. Because it is night metro trains and buses do not operate, end even if they do you do not get much of it. Otherwise, it is a good airport to spend time in. They shall, however, enable better Internet connectivity. I do not think sending a confirmation via a phone number is the best, because (1) not everyone has a phone number which can receive texts while abroad, (2) it only allows nationals of some 60 countries to pledge their mobile numbers. My country was not on the list, so I couldn't connect.
2/10

"Try to avoid MAA if you can"

Not Verified | Atlanta to Chennai via Doha Hamad. The plane landed at 02.00 am at the old terminal. Immigration was a total nightmare. The toilets are filthy and unclean until you pass through immigration. The signs were misleading, being a US citizen with Oci card, assumed we had to pass through foreigner line. 35 min later, we got to the desk, who redirected us to the OCI line. The line was so long, it went out of the immigration hall, and there were only 2 desks there. The guys there were annoyed and we went through the line around 03.55 am, the line was getting ready to riot because the guy was letting some friends of his bypass through the special line. After around 4.30 am we passed through, and the Qatar Airways bags were still there in the 50-year-old terminal. Try to avoid MAA if you can.
1/10

"I dread travelling through Chennai airport"

Not Verified | It has always been an unpleasant experience while collecting the baggage. The entire process of immigration gets over in less than 15 minutes but the wait time for the baggage is around 1hr 30 minutes minimum which frustrates all passengers. I'm an international traveller and nowhere have I waited for more than 15 minutes and this is what I call a customer experience. These days I dread travelling through Chennai airport.
1/10

"airport seems to be setup to be a failure"

✅ Trip Verified | For someone from Chennai, it hurts to say that I can vouch for the fact that the international terminal in Chennai is the worst of all the airports in India and I have been through a few. It might have to do with the fact that unlike the other major airports in India, the AAI (a government run institution), does the renovation and don’t seem to care about aesthetics and streamlining the process. I thought the airport was meant to be a silent airport, then you hear announcements on the loud speaker (why do I get the feeling of being in a train station in India, when I hear it?). This airport seems to be setup to be a failure and encouraging the airlines to move away to other well run airports which are owned by private players. Landing into Chennai - you get off the aircraft and you have a long walk through a narrow corridor, and in some instances having to go through passengers who are getting on! The immigration area is unorganised and the officers lounging around and in no hurry (good luck if you are landing at about 1 am, when multiple flights land). Leaving Chennai - while the concourse is ok, once you have crossed immigration there is nothing to do while you wait. The spa is a rip-off and if you have flights late in the night, you get to sit on some hard back chairs with nothing to do (worst is around the gates 16-18). Well, you are lucky that you get to leave the airport behind.
1/10

Not Verified | The most chaotic airport, not at all up to international standards. Absolute lack of infrastructure creates hassled customers and staff, no proper queuing systems in place and no effort to get things in place. No internal direct connectivity between international to domestic transit.
1/10

"The worst I have seen"

Not Verified | Having travelled to many countries both in Asia and Europe I can vouch that Chennai Airport both the Domestic and International terminals are the worst Airports in the world as far as service, cleanliness, facilities and rude service staffs are concerned, however the immigration as well as the Airport security staff treat passengers without the slightest human dignity. The worst I have seen, rude, conceited and sheer display of arrogance on travelling passengers. My advice to travellers avoid this Chennai Airport when traveling to South India Cochin or Bangalore Airports are better alternatives.
4/10

"not up to International design"

Not Verified | The airport is not up to International design. I saw so many mosquitoes near the food court area close to gate 18. Toilet doors are very dirty and overall it’s such a bad sirport as compared to Mumbai, Bengaluru or Hyderabad. Chennai churns out millions of engineers who go abroad and work but alas, could not use their mind to design a good functional airport. What a shame. 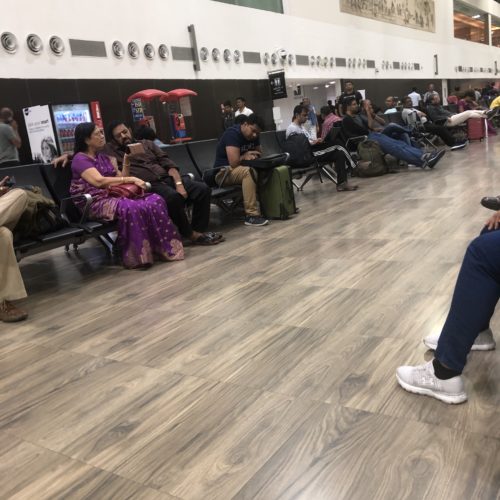 "toilets are so dirty"

✅ Trip Verified | Gents toilets are so dirty at Domestic airport. Very bad housekeeping by Airport Authority all across the airport. Probably the worst airport in any Indian Metro. There is no signs or good walkway to come from international Terminal to Domestic Terminal.
8/10

Not Verified | I had missed my laptop in the security check, took my bag but did not take my laptop. The next day, when I called the airport officer, he immediately checked and reverted back that there is a laptop with the brand and serial number I mentioned. It was a big relief for me. Appreciate that Chennai Airport has such sincere people.
11 to 20 of 111 Reviews