Absolute Hell on Earth. I estimate there were around a thousand people crowed into the check-in and gate area. No structure to the queuing area and the check in desk was changed mid way through. There are plenty of staff wandering around with radios and clip boards but the chaos continued. I will never travel through this airport again. 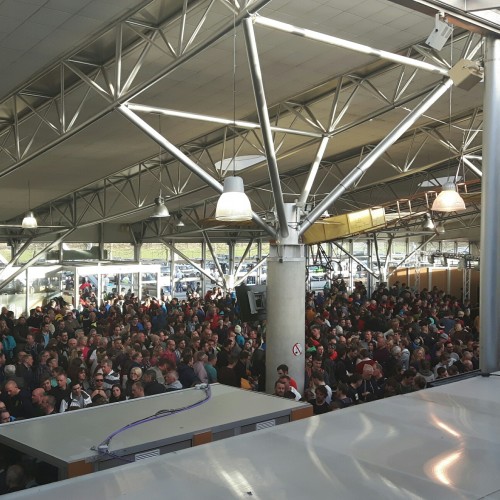 We arrived at this airport on Saturday 2nd Jan 2016 to be herded like cattle through passport control. There were 2 officers on duty checking every passport, yes just two officers. Ahead was a plane from Russia and while we waited two further plains arrived. It was cold and throwing down with rain, the queue area was inadequate to say the least. Eventually the situation got to the point where the authorities just decided to give in and let everyone in. What was the point? If you are going to do it have the staff to do it properly. We understand security is heightened due to the Paris attacks but this was a farce. The return a week later was worse. This is an airport which simply does not have the facilities to deal with the number of passengers it serves. Massive queue to get in, queue to check in, queue to go through passport control, facilities more suitable to a rural bus station, dirty toilets, nowhere near enough seats. Then to top it off when collecting our luggage later it had clearly been left outside in the pouring rain. This airport clearly needs investment and urgently.
1/10

For second year running this airport has succeeded in totally ruining an otherwise very enjoyable experience in Val d'isere over Xmas and New year. As committed Francophiles, with interests elsewhere in France, we are appalled by the arrogance of the local authorities and agencies involved in the provision and management of such services to hundreds of thousands of international visitors who ultimately supplement if not almost entirely underwrite the payments of their wages and salaries. Having tried, what appeared to be the most direct route to our favourite ski-resort in the world, we will continue to visit Val but not via Chambery Airport. The areas of complaint cover the entire gamut of airport services and are already articulated by an increasing list of similarly minded visitors posting on the Internet. It will not be long before you have to do some real work to justify and sustain your current lifestyles.
na

A terrible airport. Nowhere near enough facilities staff or processes to cope with the peak demand. An awful experience which ruined the holiday. Snow on runway caused major delays and backed up flights in UK - in the Alps? In the winter? Why should this have been a surprise? Limited snow clearing equipment. This airport should not be allowed to operate as a tourist airport for high volume of ski flights. Staff flustered passengers under pressure and tempers flaring. A horrible horrible experience but one for which there is little alternative choice with Crystal Ski to the Mont Blanc area. Unfortunately - same airport destination already booked for next year (prior to this horrific experience). 4.5 hours in slow moving road traffic to arrive at airport for 10 hour delay with what seemed like thousands and thousands of other similarly angry people. Read many reviews since which all give similar warnings over a long period of time - what do we have to say differently to prompt some dignified changes to this facility's operation? Avoid if you can.
na

This is by far the worst airport experience I have ever had. I have travelled extensively to some pretty remote places but this one is by far the worst. 1 hour queue to check in with no more than 10 parties in front of us. When we got there he had no record of our ski equipment been booked for carriage though I showed him the document which plainly showed it had so he had to call his supervisor. The check in itself was makeshift with half a dozen tee shirt clad youths throwing bags onto trolleys once finally checked in. Then another queue for security. Few trays to put things in when you got to the departure area (4 gates) it was completely full. I suspect there were at least a thousand people in a room designed for 200. When we arrived we had to circle for 30 minutes as there was no where to put us. There are tent like structures all around the terminal building serving as arrival security baggage halls etc. the main issue seems to be greed in that they are taking far more flights than the airport can handle. Avoid at all costs.
na

Chambery Airport is a disgrace! Every flight in and out delayed by 1 hour. Very limited seating very poor services (1 restaurant and snack bar). The departure lounge is just one big room (with 4 so called departure gates) where all different flight passengers just stand around mixed in hoping to be near their gate - utter chaos. Avoid using Chambery Airport at all cost - go somewhere different and if skiing in La Plagne/Les Arc area use Geneva airport. This airport just cannot cope with more than a few planes a day!
na

A total disaster which spoiled the holiday. Wildly over congested seating very limited and passengers sleeping all over the floor. Flight information on two screens only horrific queues for check in and immigration. Avoid at all costs and the extra transfer time from Grenoble Geneva etc more than makes up for the horrible experience that is Chambery.
1/10

Terribly congested airport especially ski resort changeover delays. Always delays as only limited capacity for airliners in landing parking weight restrictions etc. Cant find seats no room to sit on floors litter everywhere toilets overflowing with urine no proper information and facilities unable to cope. A usual Saturday experience according to our Crystal rep. This airport is a health and safety disaster. Travel companies should put pressure on Chambery authorities to expand and improve facilities. Until then use elsewhere - Grenoble Lyons or Geneva or try other countries as it is a horrible experience.
3/10

Extremely congested during the arrival and departure of weekend ski flights. Neither the arrivals area nor the departures area are physically big enough to cater for the number of customers trying to get through. Very subject to weather delays: day before we arrived most flights were diverted to Grenoble. We were processed (!) efficiently in both directions and will probably use the airport again due to the shorter transfer times to resorts than from GVA or LYS.
na

Small airport at the base of the French Alps catering mainly for British skiing flights during the winter season. Facilities very limited; 4 check-in desks that don't necessarily have signs telling which flight they are checking in cafe/lounge/viewing area land-side small snack bar + duty free shop air-side one baggage belt for arrivals. No problems for either of my flights (arrive Thursday lunchtime depart Sunday lunchtime) but apparently the airport can get very congested during peak periods.
11 to 20 of 20 Reviews