"wait an unreasonable amount of time"

I have been in the queue for passport control for more than 30 minutes. It extends the whole length of the airport. There is no one to check our passports and so we wait an unreasonable amount of time. This is not the first time I have experienced this poor service. 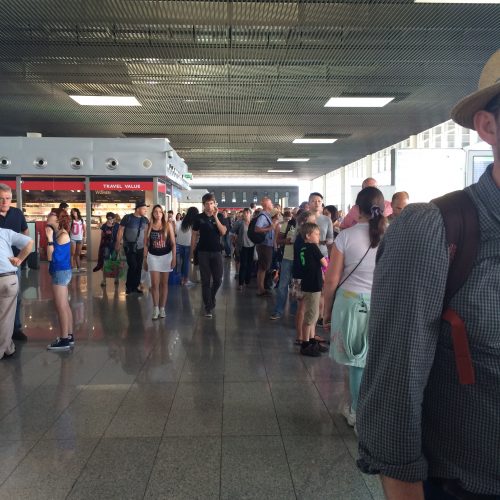 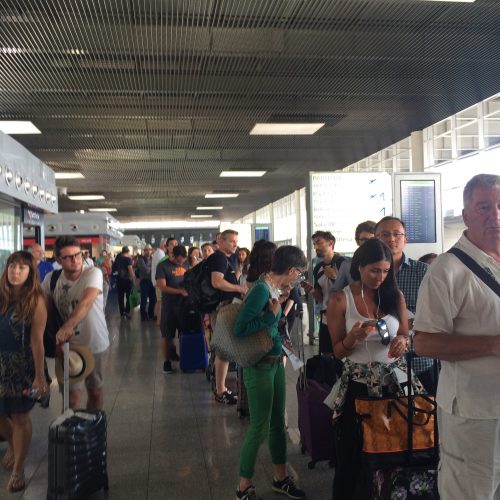 "plenty of seating and good signage"

One of the easier, better run regional airports in Italy. It is situated relatively close to the city, taking only about 30' to reach most points. The departures area is large and modern, with plenty of seating and good signage. Security in the norm for waiting and hassle. Only thing to keep in mind is that public transit, while it exists, is not terribly smooth or reliably on time (you'll get there, but it'll take a bit longer than you expected).
1/10

One would have to queue for less time in an abattoir. Absolutely dreadful. Queued for 1h30m for Alitalia check-in, then for 25m for security. When I asked the check-in agent whether she might mention these most terrible queues to her managers, she looked angrily at me and then pretended not to understand English (which, theretofore, she had been very competent in). Not helped by prolific queue jumpers in leather jackets and sunglasses, with whom (in standing my ground) I nearly became embroiled. Nearly missed my flight. Awful place - Lord only knows what it must be like in mid-summer.
10/10

"staff were very friendly and helpful"

Catania Airport was clean (including bathrooms), the security line was quick and easy, and the staff were very friendly and helpful. We had an issue with not checking in online and the ticket staff managed to check in for us online with only 10 minutes left before we were going to have to forfeit out tickets. I suggest that flyers get there early so that they don't have issues that cannot be addressed. We felt very fortunate that there were people there willing to help us fix a situation that occurred to our own lack of experience with a particular airline and limited experience flying within Italy.
3/10

"it was crowded and dirty"

Arriving at Catania Airport was a pain. I had to go to the bathroom and it was crowded and dirty, really disgusting. It took forever to get my luggage and the parking situation was unsettling. My flight back to BSL was not listed on the electronic board. 5 minutes later they started to board my flight from a gate other than the one shown on my boarding pass, which was printed 20 minutes earlyer. Never again.
4/10

A rather small airport that seems too small during holiday season. All was pretty packed, felt a bit filthy, not up to date. Luggage took a while to show on the belt. Going home, security did not make you feel secure. I was not as long to go thru as stated elsewhere here, but it felt a little chaotic. I am not bothering. We choosed Sicilia for a vacation and that is the airport you are flying into. Not sure if the others on that island are a better option.
na

Filthy chaotic poorly managed and miserable. Expected to queue at check-in/bag drop and that was only for 5 minutes but the queue for security had to be seen to be believed and made even worse by ignorant people trying to jump in the queue claiming they only had five minutes (but were then seen the other side drinking). It was then bedlam at the departure gate with two flights "queuing" at adjacent gates and incoherent announcements. Such an appalling end to a beautiful holiday. Airports should be clean there should be soap toilet paper and regular emptying of bins in toilets and proper organisation at security and departure gates all of which was sorely lacking at Catania.
na

Have just come back from our first holiday in Sicily - arriving and departing from Catania. Arrived at Catania Airport this morning with 2 hours prior to departure time to be greeted with complete and utter chaos caused by overflow in the airport check in security queues. Average queue time of over 2.5 hours to get through airport security - queues of over 300 deep! People missing their flights and lots of friction between passengers due to queue jumping and lack of staff in managing the situation. We only managed to catch our flight as we stumbled across an alternative queue reserved for solo passengers. Situation not acceptable nor sustainable and the airport management seriously need to address this issue. Security staff looked incredibly weary and I would have concerns as to whether this affected their ability to perform the necessary security checks.
1/10

We travelled during the busiest holiday period in August and this airport was completely inadequate and ill equipped to deal with it. There was no crowd management with long and disorganised queues at check in and security. People were pushing in and weaving in and out all the time. It was so bad that other passengers used their phones to film people cutting in the queues as evidence. There should have been more staff on duty and more desks open to deal with the crowds. Hardly ideal after a 2 and a half hour coach journey from the hotel. Also not enough toilets and very few meal options in the departure lounge plus not enough seating at our gate.
2/10

On arrival and departure I used the toilets they were the worst that I have ever used in any airport. There was no soap in dispensers. Looking at the general condition of these toilets and wash areas they looked as if they had never been adequately cleaned. A total disgrace. Management should be ashamed.
31 to 40 of 49 Reviews