Not Verified | Former airline employee. Have travelled all over the world. Calgary is hands down, the worst design, badly managed airport I have been to. Highest airport 'improvement' fee. Spread out with no rhyme or reason, long walks for all with no mechanical sidewalks or places for Leroy to rest. A complete and inefficient airport to connect anywhere. Just do not do it. Arrived at US departures, there is no active Nexus line for security, only a line up benefit. You must remove shoes, liquids, computers, sweaters etc. only airport in N America where there is nobenifet for having an advanced security designation. After merging into the regular line, a young woman stood 4 ft away and actually fully yelled instructions in my face. Not speaking loudly, actually yelling. Proceeded through customs, then you are forced on a winding detour through Duty Free shopping that is priced the same as Main Street shopping minus only tax. No savings and probably more expensive than sale prices outside of the airport. Food was extremely expensive, (15 dollars for a Pad Thai) and all dishes coming out of the Thai restaurant were the same brown sludge no matter what was ordered. Ice cream at menchies was over 7 dollars for the equivalent of one scoop. Plug in for computers were broken, and very little seating throughout the US departures concourse. If you can avoid this place, make sure you do.
3/10

"You can do better"

❎ Not Verified | Caught a connection in Calgary on July 7th, and I returned on July 10th. The first connection had the gate departure change twice, then the flight was delayed. On the way back, the gate departure was again changed. The only redeeming factor was the trolley system otherwise I'd still be walking around in that airport. Come on Calgary! You can do better than that.
1/10

"only one line doing the security checking"

✅ Trip Verified | Longest lines you have ever seen in your entire life! There was a 1:30 hour line at the security screening gate where waiting passengers upwards of an hour got into a verbal altercation with the airport personnel, almost to the level of a fight. They had been standing in one of the longest lines I have ever seen. Why was this line so large? Very simple. There was only one line doing the security checking for all these passengers, creating a bottle neck. Its obvious on Sunday mornings Calgarians do not bother to come to work until much later. They just make the passengers pay for it, by holding them in monstrously long lines. Why would they care? Calgary Airport would rank as the worst airport I have ever been to. (A) Unfriendly (B) Unhelpful (C) Do not care about international trallers (D) Are there to harass international travellers. I would not recommend Calgary Airport to anyone, anywhere. No Directions, no guidance, just sheer incompetence on display. Abject unapologetic incompetence.
10/10

✅ Trip Verified | Absolutely the best Canadian airport I have been to till date. The ambience, officials working, cleanliness, police officers and food stalls were all beyond expectations. The battery operated buses between gates are an absolute delight. The driver would even smile and wave at you if you're taking a picture. Keep it up. 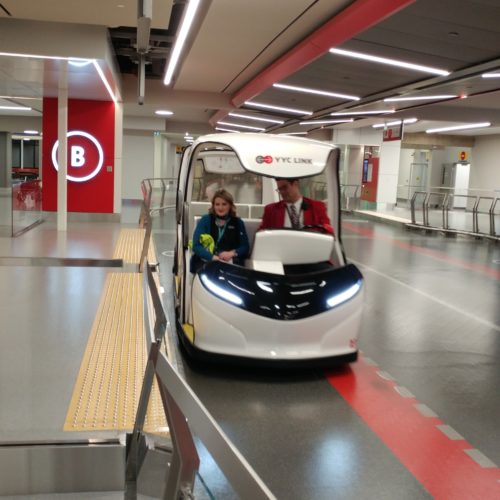 "staff on a power trip"

✅ Trip Verified | After waiting in an exceedingly long line at Calgary security, I was pulled aside by a very young inexperienced girl with no common sense. She took all my lipsticks & travel size items and dumped them into one of the dirty trays that all the boots etc are placed in. After going through all my personal items she told me that the mascara was considered a liquid and I would have to throw items out. I was simply flying back to Winnipeg from Calgary as I have done many time before but I guess I was never lucky enough to get the staff that was on a power trip. I ended up having to board the plane without my tiny hand sanitizer & eye drops for very dry eyes. To make my trip complete on a bright sunny day, as the WestJet plane sat at the gate, we were delayed. No word on why but it appeared that one of the crew was late arriving to work for flight WS738. However the good news is that everyone was safe because my mascara was being held at security.
2/10

"have not had a good experience"

Not Verified | Unfortunately I have not had a good experience at this airport. I have been through many times over the last several months and Ground crews seem to be the biggest slowdown. Often the arriving plane needs to wait for crews. De-icing is a major problem, and causes major delays This is Canada, and flying in winter conditions is the norm that other airports handle adequately. I have seldom been on time with a flight through Calgary. Unfortunately it seems for now I will need to avoid this airport until it gets it act together!
3/10

"poorly run and a design disaster"

Not Verified | This airport is poorly run and a design disaster. I arrived from the US and needed to go through customs and then a connecting flight. Once the aircraft landed the door and hallway maze starts. Some passengers go the wrong way and get lost. Very few people are available for directions, most often other travelers have to help out. Then customs another poor design. It was busy big lineups and complete chaos. Then the shuttle to move people, big lineup and no shuttles in sight. This airport has become a very poor place to transit. I try to use Vancouver or Edmonton airports because they are much better.
3/10

"What a horrible terminal"

Not Verified | What a horrible terminal. Obviously the people in charge of setting the specifications for the airport instructed the designers to build cheap. There are no moving sidewalks. There are no tables, where one can work while waiting for one's flight. I found some of the security staff rude. One pushed the tray at me and nearly knocked my phone and papers to the ground. I'm sitting here looking down E. It reminds me of a parking lot with glass on the side. There is an absolute lack of seating throughout the terminal.
3/10

Not Verified | On November 18, 2018, for the first time we used one of the new domestic gates (C72), apparently part of the new international terminal. This rating applies only to the new "C" gates - the rest of YYC is as good as ever. What a disappointment. First the good news - distance to the gate was reasonable, corridor was bright & clean, and plenty of windows, and seating seemed to be (barely) adequate. Plenty of people were standing, but probably some were standing by choice. As usual, Westjet staff seemed to be doing their best, with a good attitude. Bad news - Inadequate toilets. For all the domestic gates C70-C79 there was a single facility. In the Men's there was 1 urinal and 3 stalls, 3 sinks, one good hand-dryer. The whole place was cramped, and often there was a line-up. My wife reports the Women's is identical except of course for 4 stalls and no urinals. - Practically no services - one nice little bar with adequate seating and a few TVs. - Crowded feeling - only a few feet between the toilets/bar on the left, gates and seating on the right; and the line-up for the gates filled these few feet. By comparison, Heathrow and LAX sometimes get a bad rap, but the worst I've seen there is so much better than YYC-C72. And YVR is vastly more pleasant and comfortable. Nowhere near the airplanes. Once we finally went through the gate line-up, we walked maybe 200m in a series of soulless corridors with little or no signage to reach the plane. It felt like an old Dr. Who episode, or like something out of Kafka. Perhaps in consequence, although boarding started about 40 minutes late, take-off was about 55 minutes late.
3/10

"design is a disaster"

Not Verified | Ridiculous long queue from international departure. Only one scanner. Disorganized chaos. They feed any and all priority boarding ahead of 200 other people with a continuing growing line. Common sense would have at least 2 scanners operating. I dread having to use the Calgary airport. The design is a disaster. Shiny clean and new does not take the place of safe fast and efficient. You need to add another 1 hour to your schedule if your stuck using this airport 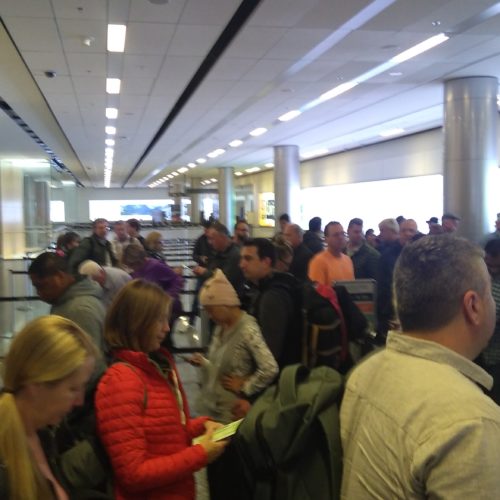