"Nobody seemed to want to help in any way"

✅ Trip Verified | All staff pretty rude and didn’t speak any English. Nobody seemed to want to help in any way. That’s fine, but I get to security and basically all I have is my wallet and a water bottle. They snatch my water bottle and throw it away. Very wasteful and rude. Would have chugged it right there no problem. Extremely annoying and frustrating way to end my time here in Colombia.
1/10

Not Verified | Transit to other destinations in Colombia requires passing through immigration, for which the waiting time is usually over an hour long - a two hour stopover is often too short to make the connection! Airport signs are also poor, so first-timers end up confused as to where to go and swathes of the airport do not have staff present to give directions or information.
1/10

"one of the worst transit experiences"

✅ Trip Verified | Bogota airport continues as one of the worst transit experiences: continuing the war on water 10 years on. Bottles of liquid are instantly and shamelessly dispatched for, I presume, later use, while a bottle of water costs USD 5 or 6 airside. Always remember not to bring duty free, or even a simple bottle of water in your hand baggage. The previous immigration check is slow, the entire area in front of the booths is occupied by people queueing. Allow 20-30 minutes to traverse this mess. The WiFi continues to be almost unusable, slow, and dropping connections. A local SIM card, or roaming, are still essential to be able to communicate. The food court, at the very very far end of terminal 1 after multiple non-functioning walkways, has limited opening hours, until 9pm, unremarked on any display or even in front of the court or restaurants. A miserable selection of fast food was all that was available. Flight announcements are haphazard, colliding, varying in volume so it's almost guaranteed that the announcements for the flight you're sitting closest to will inevitably be drowned out by someone screeching into the microphone at the far end of the terminal. All in all, a very poor experience.
9/10

"it is very OK airport"

✅ Trip Verified | It is another normal airport. Period. I arrived Monday around 7:15 PM. Immigration queue was around 15 minutes. EU passport, question about if for tourism, answer "business meeting", stamp, all done. Customs - do you have anything to declare, "no", this lane please, 20 minutes after landing out. Upstairs to buy local SIM card for data (70K COP for 1 week / 2GB), nice ladies helping to activate it (you need the help), back down to get the taxi (go to queue for yellow ones, 40K to the city, up it to 50K to be polite). Return Friday flight 9:15PM, arriving to airport 7PM, left city 6PM - this time of the day it takes 1hr from city to airport. Passport control + security = 15 minutes again. Security took away my beard scissors (3cm), that have been OK around the world (only Dubai has done the same once from 3 times). All cool. Did not even try the airport WIFI - found that this sucks everywhere. Enough shopping after security. I did get my souvenir coffee and other stuff. Eating after getting in to airport security area is an only real problem ... there is a food court where everyone queues for Burger King and next to that there are some .. not-so-pizza-pizza place and some other strange places where no one buys anything. Based on my experience for an EU citizen it is very OK airport, only thing to complain about is the eating possibilities. 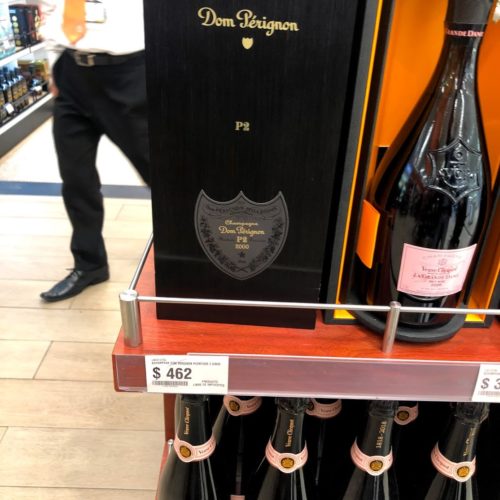 "Horrible service and respect for the passenger"

✅ Trip Verified | 2hr queue at migration check. Horrible service and respect for the passenger by the supposed to be the best airport in Latin America. Besides, can’t conceive the employment of buses to arrive at the terminal. 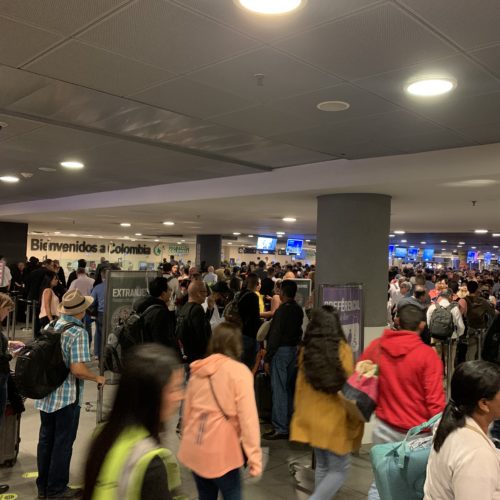 "it was a pleasant place to be"

✅ Trip Verified | I used this airport for both international and domestic arrival and departure (so four times total). Although there was nothing special to make this an outstanding airport, I found it to be plenty comfortable - it felt new, it was immaculately clean, lines were short, there wasn't too much walking, public transit (which I used) to and from the airport was cheap (under $1 U.S.), security was efficient, signage was sufficient, luggage arrived in a reasonable time, seating seemed plentiful, and there were plenty of food choices on both sides of security. My main criticism is that I didn't see much in the way of electrical or USB outlets for charging devices, and free wi-fi was limited to half an hour. Immigration and security workers weren't particularly friendly, but they weren't rude either. I got the impression that many store and restaurant workers don't speak English, but I'm not sure because I speak Spanish. I was surprised that some of the eateries accepted cash only (and the exchange rate for U.S. dollars was about 20% below market). Prices varied wildly - anything priced in dollars or aimed specifically at international visitors was outrageous, but I bought a Colombian brand of bottled juice for under $1 U.S. I'm not much of a shopper, so I wouldn't want to be stuck here on a long layover, but for a wait of an hour or two it was a pleasant place to be.
8/10

✅ Trip Verified | I had a two hour transit in Bogota Airport and it was the worst, most inefficient transit of my life. We waited at immigration for over an hour, with no one there to help us even though it was becoming clear we were going to miss our connection. The immigration staff were exceptionally rude and inefficient. After immigration we again had to queue at customs, and go through another security check. Needless to say we missed our connecting flight and had to wait another 3 hours for the next one. Rating would be a zero if I could.
3/10

"the worst airport I visited"

✅ Trip Verified | I think Bogota was the worst airport I visited on this trip to South America. Long lines at immigration, staff that barely spoke english and to top that off, finding out our luggage did not arrive due to weight constraints. Before we even arrived, only spanish immigration and customs forms were handed out. Being the only person who spoke spanish in the group, I had to complete everybody's forms. Immigration who had to call her supervisor to ask us a question, and for some reason, the customs officer was not able to read that I wrote "AV144" and kept asking me what my flight number was. The terminal is also incredibly large and there is no easy way of getting from one end of the terminal to the other without getting tired. Avianca lounges here are an insult to star alliance. The two worst things happened while we were boarding. The 12:55 flight to Cancun and the 13:00 flight to New York were boarding at gates which were literally next to each other. What could possibly go wrong? Two huge lines forming next to each other and people just pushing each other to get to their respective planes. They called for boarding at 12:30 but I got on the plane at 1:15 because they had to thoroughly search some passengers, and I mean extremely thoroughly, and instead of searching these passengers first and then calling people for boarding, they made us (mostly business class passengers and gold members) stand in line at the jetway leading to the plane. I wish that they have better organisation, because frankly Colombia is a rather untouched but tourist-friendly country. I'd be willing to give this airport another chance with another visit.
2/10

"only speaks Spanish to you"

✅ Trip Verified | Badly structured inside, shops and restaurants all spread out and miles apart. They accept dollars and euros here but they don't have change! Makes no sense, how likely it is for someone to have exactly €57.49 on them? The worst part though that everyone only speaks Spanish to you. I'm not in a just a Colombian city walking around, I'm in an international airport, you have to employ staff that speak English, not just their mother tongue.
1 to 10 of 75 Reviews