"it is a disgrace"

Not Verified | Worse airport ever. Extremely nasty and rude security and check-in crew. No smoking area and nowhere to change a baby once we checked-in. Such a shame after meeting incredibly open-minded and friendly Berliners to end the weekend like this. Close this airport - it is a disgrace. I have never seen this before.
1/10

Not Verified | Worst airport ever visited! Unable to checkin early, disgraceful for Business class! Britsh Airways Checkin staff said we had to wait an hour, disgraceful for Business class! When we finally found the British Airways Business Class lounge it was woeful, crowded, small, dirty, limited food. For the toilets you had to go to the basement. A crowded and congested airport. Avoid it if you can!
1/10

Not Verified | The longest luggage delivery I have ever experienced. Considering the delivery belt and arrival gate are literally next to one another there is honestly no excuse for the delivery to start 40 mins after the arrival. Understaffed? Unorganised?
1/10

"Nothing is efficient about the process"

Not Verified | Crikey. Quite possibly the worst airport I have ever experienced. Long queues once you arrive off the plane towards the security desks, actually leading outside into the inclement weather and the tarmac! E-passport machines that just don't work so move you to manual security. Oh but then they close 3 of the doors. So two people serving nearly 1000 people from multiple planes. Well over 40 mins to get through, which in the end was timed well because thats when the baggage arrived. Departure, just as bad. Terminal C had two security queues, well I say queues but most people (mainly German patrons) don't seem like to use them and just cut right in. Nothing is efficient about the process. Give yourself plenty of time took well over an hour to get to the gate. Arrivals and departures in the same place in one terminal, an absolute nightmare. Compare this to Manchester for the other legs of the journey where security was minutes. Arriving back at Manchester I was off the plane, through security, baggage collected and at the train station 10 minutes after getting off the plane. Exactly how it should be. Berlin desperately needs this new airport. Hire new staff too, either they dont care or the awful airport as ruined them but they all seemed to hate life and every interaction was like blood from a stone.
2/10

"a disgrace for any civilized country"

✅ Trip Verified | Probably the worst airport I have been in the last ten years. The mess starts directly after arrival when baggage drop off is located in a different terminal. However, the walk is shorter than expected which got more than overcompensated by the queue you'll probably going to find there. There is a front-desk employee sending back people from the queue without a boarding pass who have probably waited there for 10-15 minutes. One can argue that is their own fault in the end but proper signs would save everybody's time and prevent frustration. Baggage dropped off counters are machines and elderly people struggle using them regularly which makes queues ever-growing. A little help here and there would be more advisive. Once you successfully dropped your baggage you have to go back to the gate you're coming from to queue up for security checks. No fast lanes here, just more mind-numbing waiting and more frustration which peaks once you made it to the border control officer who is apparently more interested in their phone than yours. After arrival at your gate, you have to get seated on dirty, old leather seats without the slightest chance for any discretion or the possibility to get beverages or food. I was wondering if spending money on a cash-upgrade would have smoothed the experience but came to the conclusion that due to the lack of space, cleanliness, lounge access or priority lanes, going through here as cheap as possible is the only option. This airport would be a disgrace for any civilized country and it a shame for the German capital. 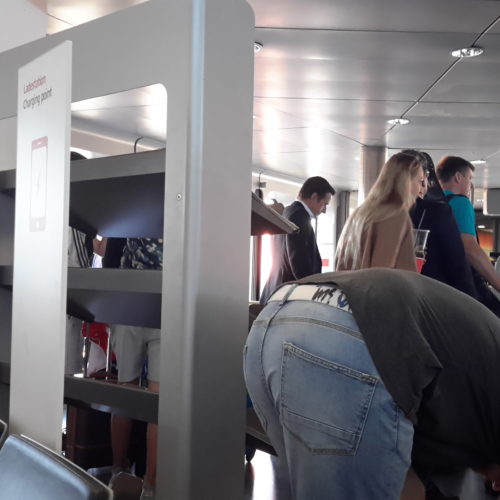 Not Verified | I can only speak for Terminal C at Tegel. Appalling. The worst Terminal I've used, ever, in Europe. Just about acceptable as far as the security barrier, thereafter disgraceful. The gate area was massively overcrowded, nothing like enough seating. If you arrive hungry eat before you go through to the gates. The food and drink facilities inside are woefully pathetic and overpriced. E3.50 for a small bottle of water? The refreshment stall in the gate area didn't even have any coffee. The 'Garden' restaurant and smoking area (yes, both together) was a health hazard. Thick with tobacco smoke. Who wants to eat food in that, even a smoker would be put off. Non-smokers shouldn't even attempt to go in there. Presumably this part of the terminal is a temporary building. If not, its the worst example of German engineering I've ever seen. In fact even if its temporary it's terrible. A disappointing end to a great long weekend in Berlin.
1/10

✅ Trip Verified | Berlin Tegel Airport has too many flights and too many passengers mean nothing works, the slightest disruption creates chaos, there is no waiting space, check-in, security, etc. take ages, everything is dirty and lifts and elevators stopped working a long time ago. Could not be much worse! 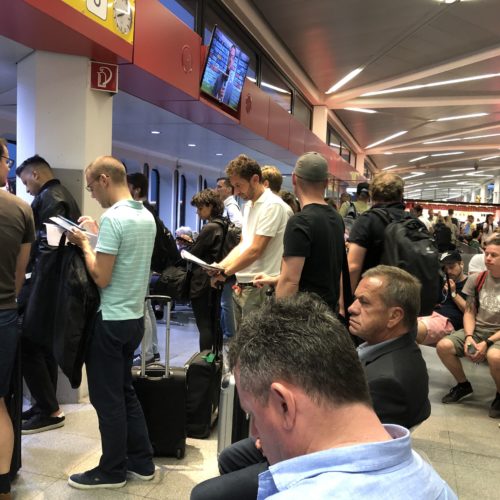 ✅ Trip Verified | Berlin Tegel might well be the worst airport in Europe, it definitely is the worst of the larger ones. Endless lines on check-in. No extra lines for baggage drop after web-check-in. Again long lines at the passport and security checks. Heavily overcrowded departure lounges that are shared by several flights. Tiny caricatures of duty-free kiosks in the midst of the chaos. No further shopping or restaurant/cafe options. By far not enough seating. Crowds everywhere and consequently unpleasant physical contact wherever you stand or walk. TXL might have been acceptable for a quarter, or better 10%, of the Pax load. Like this, it is a disgrace.
1/10

"the worst airport in a civilized country"

Not Verified | Undoubtedly the worst airport I have ever flown in or out of. To quote one of my fellow passengers, it felt “like we’re in a third world country”. The problems started at passport control, which took longer than I have ever experienced before. I understand that security and such takes time, but often the border control agents would not even be inspecting passports, and instead just sit there joking with one another. Once we finally got through that line, we were greeted with a mind numbingly long security and X-Ray queue. If we had not arrived 2 hours before our flight I do not think we would have made it to the gate on time, despite it being directly behind security. The terminal in which we waited lacked any of the basic amenities one would expect to find by their gate. The bathrooms each contained only one stall, and were not well kept. The only option for food was a poorly stocked and overpriced vending machine. Finally relieved to be called to board and leave the lackluster terminal, we were met with yet another inconvenience. We were walked directly onto the tarmac, where emotionless airport employees then packed us into hot busses like sardines, with many more people than can be safe and evoking worries of claustrophobia. After the bus was filled beyond capacity we proceeded to wait in the heat for upwards of ten minutes for no apparent reason. After a five minute drive across the tarmac we were again treated to another excessively long wait, during which we were forced to remain in the hot crowded busses before finally being allowed on the plane. Without question this is the worst airport in a civilized country, and should be avoided at all costs.
1/10

"immigration is a mess"

✅ Trip Verified | Horrendous! I was coming from New Delhi with a layover in Ukraine to Berlin. Now as soon as you get off the plane it's straight to immigration nothing in between except one toilet. The toilet has one urinal and one tap. The immigration is a mess (understaffed to help so many people) one elderly lady was the only security/helper there. But the worst is still to come. Baggage claim is a joke. There is a single conveyer belt for about 5 different arrival aircrafts. 100's of people are queued around one conveyer belt. Not to mention that this area has no seating leaving people to put their luggage and themselves on the floor. I came in July through this airport when outside temperature is like 30°C and this airport has no air conditioning. Forget AC's this airport does not even have fans.
11 to 20 of 212 Reviews