"nothing short of an absolute disgrace"

✅ Trip Verified | We arrived for our flight an hour and 20 mins before departure at 13.15. We joined the already busy queue for security thinking we had plenty of time . We spent 60 minutes in the queue. Only two security lines open, an absolute disgrace which considering the snail pace advancement of the queue proves major incompetency and inefficiency on the management of this airport. I will not use Basel airport again. People were in the long queue, stressed out, no explanation for the slowness, eventually a third security line opened up but still the proceeding was slow. In this day and age this is nothing short of an absolute disgrace , I’m sure many people missed their flights because of this. So my advice is stay clear of Basel airport, it’s a joke.
9/10

✅ Trip Verified | Quite a lot of 'rearrangement' has taken place since my last visit, some of which I was aware of from reading Skytrax reviews. Leaving Basel for a non-Schengen destination, there is a larger passport control area just before the departures areas split for the fingerdocks, with lanes to queue in. If your flight departs from Gates 20-21 you should turn right after the passport check to access your gate - these had previously been French side gates. On return, the some of the criticisms raised by travellers have been addressed. On arriving into the lower level corridor, there are now yellow multilingual signs advising passengers where the final toilets before passport control are (ie at the start of the corridor) and further signs to inform passengers that there are no toilets beyond this point. On the day I travelled, the travellators were not working, possibly to avoid a crush where they and the regular walking channel converged. On reaching an area closer to passport control, there are roped off 'channels' to control the number of people converging on the passport control booths. These worked well as our flight was the only one arriving at that particular time from London Gatwick, but I could imagine that if there were to be several flights arriving, there could be a large number of people waiting to be processed. Processing was quick and friendly, but only two booths were staffed. I don't know the reasons behind this, but it would be good to hear back from other travellers if more booths are staffed at peak arrival periods. The best news was that my luggage was already arriving in the baggage hall once I emerged from immigration! I appreciate that we have been spoiled in the past using BSL with little queuing and generous staffing levels. But the world moves on, and not always as we would wish. These controls are necessary for processing non-Schengen flights and I suspect that they will be even more justified if (or when) Brexit happens. Expect a wait time for processing as in many other airports and be patient. And if you just happen to get a speedy passage, count it as a bonus!
3/10

Not Verified | Since the increased security measurements by France, the whole experience is way worse. An hour long, (literally 65min), queuing upon arrival for the passport control makes this a place to avoid. The efficiency not only on security, but also on gangway handling and baggage restoral has dropped drastically. It saddens me because it used to be quite nice.
1/10

Not Verified | This was an excellent airport to use until a few months ago. The queues at passport control are now unacceptable at 20 minutes minimum and something 40 minutes. I'm now going to fly to Zurich instead, as this end to a journey with no toilets and hours of standing is very poor. Airport has gone from 5* to 1*.
1/10

Not Verified | I am flying around 100 times a year and this was the worst passport control that I ever experienced. The queue went across the whole arrival area, streched through areas that where designed to walk through fast (equipped with walkways) and took hours. Aside of the extremly long waiting time there was no possibility of going to toilet and no assistance like offering water. Not a single airport employe was there. People were shouting on each other as some tried to overtake others. Pure chaos. Avoid this horrible place at all cost.
3/10

Not Verified | Queue at immigration is very long, very inefficient and uncomfortable. Seating in departure block is limited. Very limited choice of restaurants and not very kid friendly.
1/10

"now you should avoid it"

Not Verified | When you fly in Schengen normally nobody wants to see your passport. But not in Basel: As they have not enough gates people have to go to passport control for departure for BCN, BRU etc. The queue is long and you have to wait for 30 minutes. This time the easyjet flight was cancelled. Instead people are allowed to go the way back to terminal they have to show again their passport as all arriving passengers. Ridiculous. This airport was many years perfect, but now you should avoid it.
1/10

Not Verified | Since this Airport did a security change when arriving ("passport control"), it's really annoying to fly to Basel. Unfortunately I have to fly there where often, and I'm honestly thinking about flying to Zurich instead and then travelling by train to Basel. But isn't that ridiculous to fly to another airport, because they can't manage their airport. It was always good in the past when there were no additional passport checks a few months ago, but now it is a nightmare for tourists and business travellers. I'm flying about 100 times per year and can tell, that this issue makes the airport to the worst one I know. 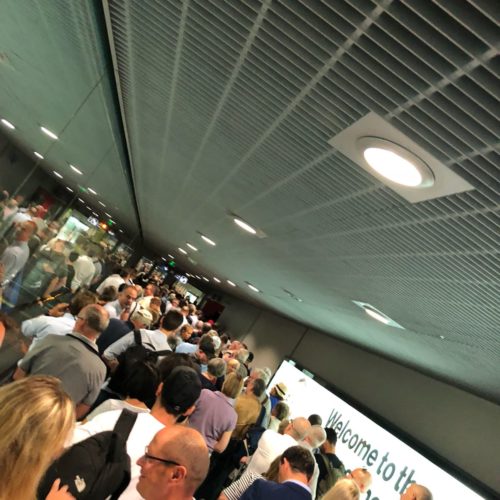